Is Rick Perry the white knight Republicans have been yearning for?

He flirted with secession a few years ago, but now he's thinking about the White House 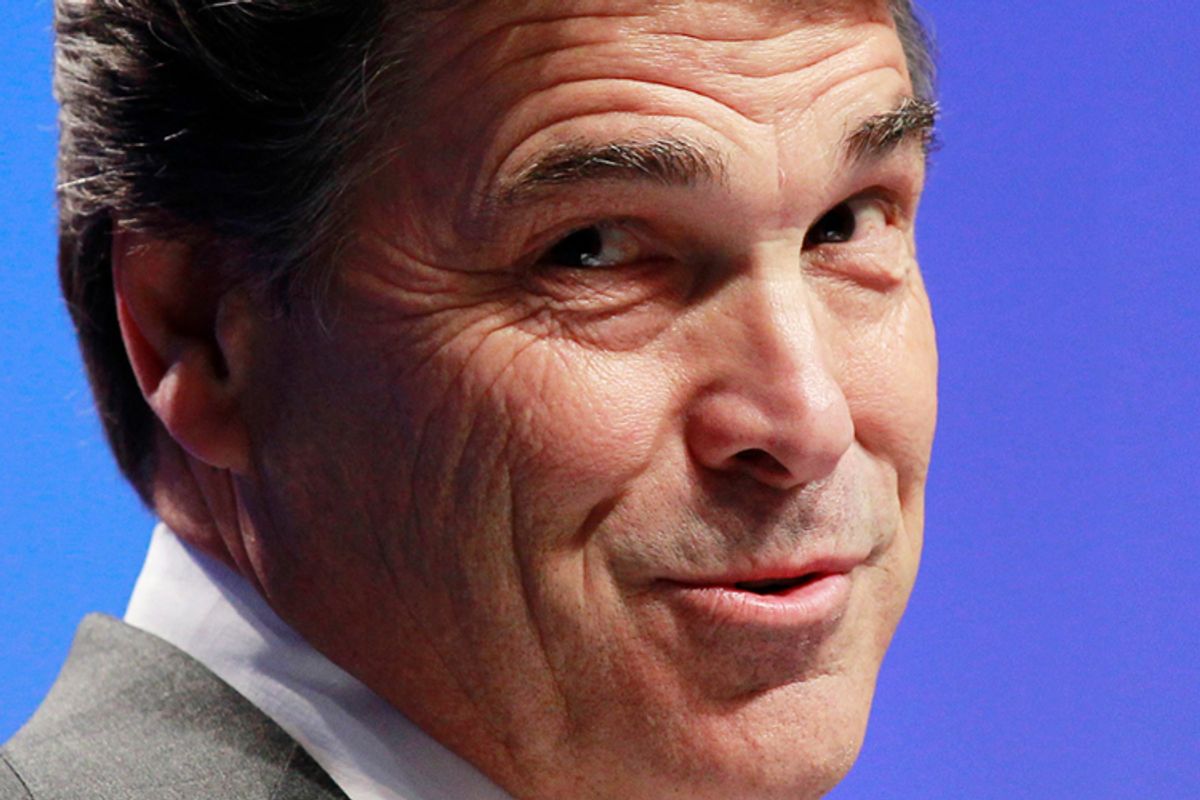 Last weekend brought news that Indiana Gov. Mitch Daniels would not be a candidate for the Republican presidential nomination, a development that effectively reduced the GOP field to three candidates with legitimate chances of victory: Mitt Romney, Tim Pawlenty and Jon Huntsman. (And there's some debate over whether Huntsman, the former Utah governor and ambassador to China, even deserves this status.)

This intensified speculation that a new candidate might emerge, and now we have our first concrete sign that one will: After several weeks of speculation, Texas Gov. Rick Perry now says that he will "think about" entering the race after the current legislative session in Austin ends next Monday. Perry's admission takes on added significance when you consider how adamantly he has dismissed the possibility of running for president until now.

If Perry does jump in, there will be two immediate questions about his candidacy.

One is whether he'd belong in the tier of "viable" candidates with Romney, Pawlenty and (maybe) Huntsman. As I've written before, most of the Republicans now running for president have no realistic shot at winning the nomination. Rick Santorum, Herman Cain, Newt Gingrich, Ron Paul, Gary Johnson, Roy Moore, Michele Bachmann and (if she runs) Sarah Palin all -- for reasons having to do with electability in November, problems with major components of the GOP coalition, or a basic lack of stature (or some combination of these factors) -- are all unacceptable to the Republican "elites" who shape the rank-and-file's view of candidates. Only Romney, Pawlenty and (again, maybe) Huntsman clear this threshold and have at least the potential to become the consensus candidate of the elites.

Does Perry also have that potential? Probably. As the longest-serving governor in the history of America's second-largest state, he has stature that the non-viable candidates lack. He's also shown in Texas an ability to raise serious money and to build a formidable political operation. And he passes the litmus tests for just about every key group in the GOP coalition.

It is true that Perry has stirred his share of controversy, most famously when he discussed secession at a Tea Party rally in 2009. That's the sort of thing that can make party elites nervous about a candidate's general election viability. If Perry decides to run and then demonstrates an inability to contain intemperate and inflammatory remarks, it could derail him. But for now, he at least has the potential to make elites comfortable with him and to convince them that the secession outburst was an exception and not the rule when it comes to his style. It's also true that the secession line helped mark Perry as a "true" conservative to Republican activists outside of Texas, who may not have known much about him before then.

The other major question if Perry runs will be: Is it too late? After all, Romney has essentially been running for president since the middle of this term as governor of Massachusetts, back in 2005. Pawlenty pretty much began the day the 2008 election ended. Huntsman came to the race later, but even he's been at it for a few months now. No doubt, we will hear plenty about the examples of Wesley Clark and Fred Thompson -- two recent White House candidates who were talked up as "white knights" by their parties and the media only to fall flat on their faces when they finally agreed to run. But it's probably wise not to read too much into this. Their examples should serve as cautionary tales (it's very possible that a Perry campaign wouldn't end well), but not as proof that a late-starting candidate can't win in the modern era. As I noted last week, we just haven't seen enough candidacies like this to make such a definitive statement.