NATO troops among those killed in Afghan attack 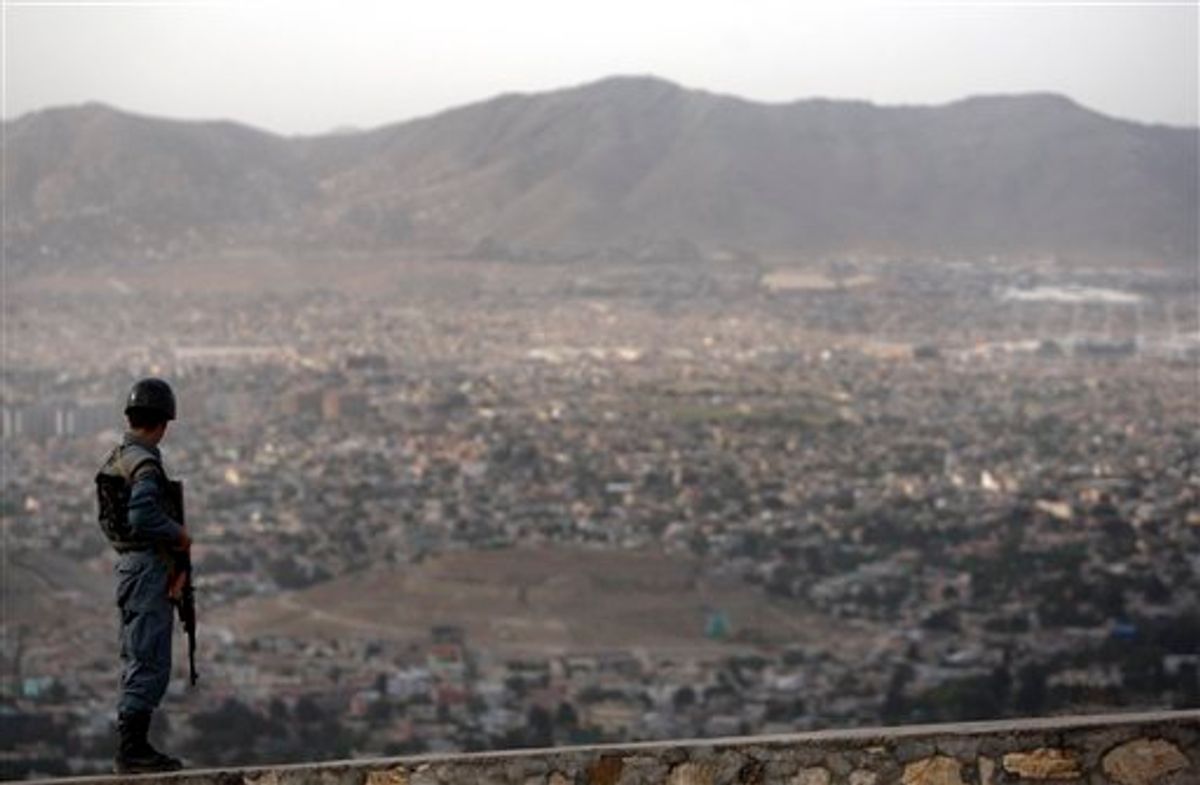 An Afghan policemen stands guard as an aerial view of Kabul city is seen from atop a hill in Kabul, Afghanistan, Friday, May 27, 2011. (AP Photo/Mustafa Quraishi) (AP)
--

A suicide bomber wearing a police uniform blew himself up during a meeting at a provincial governor's compound Saturday in northern Afghanistan, killing two NATO troops and four Afghans, officials said.

The bomber detonated his explosives vest in a room in the governor's office complex in Takhar province where high-ranking Afghan officials were meeting with members of the international coalition, said Faiz Mohammad Tawhedi, a spokesman for the governor. The governor, Abdul Jabar Taqwa, suffered burns to his head, hands and back.

"What we know is the guy who carried out the attack had a police uniform on," Tawhedi said. "How he entered the meeting room and why he was not searched, we don't know."

The Taliban claimed responsibility for the late afternoon attack -- the latest in an uptick of violence as the Islamic extremist movement has launched its spring offensive. The effectiveness of the Taliban's campaign could affect the size of President Barack Obama's planned drawdown of U.S. troops in July.

Taliban spokesman Zabiullah Mujahid said it was part of the insurgency's assassination campaign against high-ranking government officials. The bombing also was meant to undercut a military offensive the Afghan National Army was planning to launch in the north, the Taliban spokesman said.

Among those killed was Gen. Daood Daood, police commander in northern Afghanistan, said Dr. Hassain Basech, health director of the province. Daood was a former deputy interior minister for counternarcotics and a former bodyguard of Ahmad Shah Massoud, the charismatic Tajik leader who commanded the Northern Alliance and died in an al-Qaida suicide bombing two days before the Sept. 11, 2001 attacks that provoked the U.S. invasion.

Also killed were provincial police chief Gen. Shah Jahan Noori, a secretary to the governor, and one of Daood's bodyguards, the health director said.

In addition to the governor, nine other Afghans were wounded -- a cameraman working in the governor's office and eight Afghan troops.

President Hamid Karzai condemned the attack, calling it a "barbaric act of terror."

The health director said a number of NATO troops were also wounded and were taken to a military base. He could not provide details.

Violence has been on the rise in the north, where the Taliban, al-Qaida and fighters from other militant factions are known to be hiding, including the Haqqani network, Hezb-i-Islami and the Islamic Movement of Uzbekistan. NATO has sent more troops to the north and has been pushing harder into militant-held areas.

In October 2010, a bomb killed Kunduz Gov. Mohammad Omar and 19 others in a crowded mosque in Takhar province. Omar was killed just days after he warned of escalating threats from Taliban and foreign fighters in the north.

In February, a suicide bomber blew himself up at the entrance to an Afghan government office in neighboring Kunduz province, killing at least 30 people, including many who were waiting in line to obtain government identification cards. At least 40 others were wounded in the blast.

Associated Press writers Deb Riechmann in Kabul and Kirsten Grieshaber in Berlin contributed to this report.