U.S. says California man was released without any aid promise 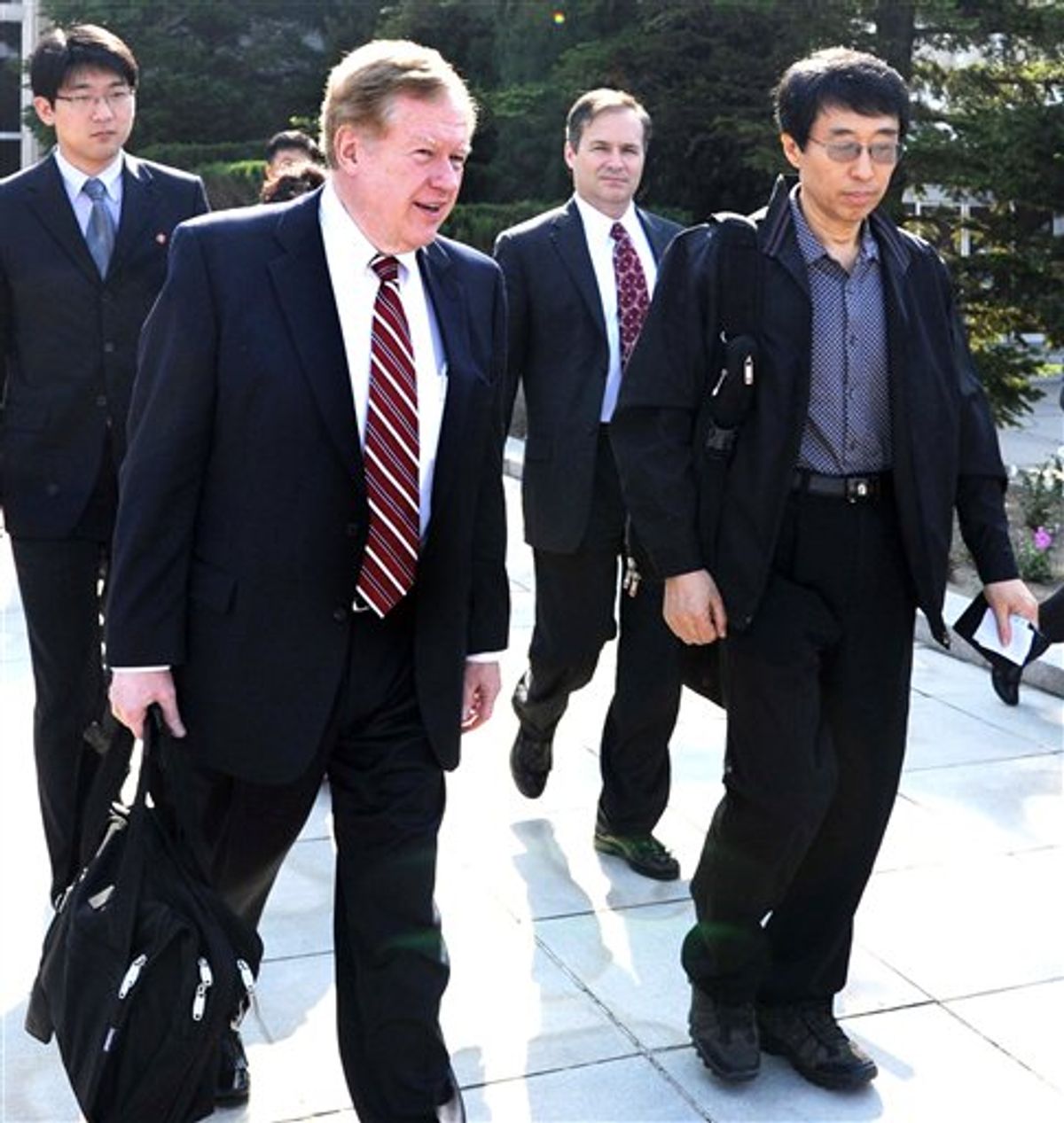 Robert King, left, U.S. special envoy for North Korean human rights issues, and U.S. citizen Eddie Jun, right, prepare to leave Pyongyang, North Korea, on Saturday May 28, 2011. The American held by North Korea for a half year reportedly for proselytizing is returning to the United States, brought out by the U.S. envoy who negotiated his release. (AP Photo/Kyodo News) JAPAN OUT, MANDATORY CREDIT, NO LICENSING IN CHINA, HONG KONG, JAPAN, SOUTH KOREA AND FRANCE (AP)
--

North Korea freed an American it held for a half year for reportedly proselytizing, handing him Saturday to a U.S. envoy who said Washington had not promised to provide aid in exchange for the man's release.

The envoy, Robert King, accompanied Eddie Jun on a flight from the North Korean capital, Pyongyang, and told reporters after arriving in Beijing that Jun would be reunited with his family in the United States "within a day or two."

Jun did not appear with King before reporters in Beijing. Jun, dressed in a dark jacket, appeared in good spirits, smiling with King as they boarded the plane in Pyongyang, according to footage from Associated Press Television News. After Beijing, Jun flew to Seoul where he told reporters he would have a medical checkup, South Korea's Yonhap news agency reported.

Jun, a Korean-American from California who traveled to North Korea several times and had business interests there, was arrested in November, with the North's official Korean Central News Agency, or KCNA, saying he was accused of committing a serious crime. Pyongyang didn't provide details, but South Korean press reports say Jun was accused of spreading Christianity.

King, the U.S. envoy for North Korean human rights, traveled to Pyongyang this week with specialists to assess the severity of the latest of North Korea's chronic food shortages. He said he spent 3 1/2 days in talks with North Korean Foreign Ministry officials. He did not specify how much time was spent discussing Jun but tried to quash any speculation that the U.S. had offered aid to obtain his freedom.

"We did not negotiate or agree to any provision of food assistance," King told reporters.

The U.N. World Food Program made a $200 million appeal last month, saying more than 6 million of North Korea's 23 million people urgently needed food aid. Some critics question if the need is that dire and whether the North would distribute outside aid fairly.

King said he would report his findings back to Washington.

KCNA announced Friday that Jun would be released after King "expressed regret at the incident on behalf of the U.S. government" and assured it would try to prevent a recurrence.

In Washington, State Department spokesman Mark Toner said Friday that he could not confirm whether King had expressed regret. "We welcome their decision. It's certainly a positive step," Toner told a news conference.

Toner said the release would have no bearing on the U.S. decision on whether to provide food aid and on restarting dialogue with the North. On engaging North Korea, Toner said the U.S. was still looking for "concrete actions" in other areas and an improvement in the North's relations with South Korea.

The United States, which fought on South Korea's side during the 1950-53 Korean War, doesn't have diplomatic staff based in North Korea. Negotiations on establishing relations have snagged amid North Korea's efforts to develop nuclear weapons and ballistic missiles and its provocations toward South Korea.

In recent years, North Korea has detained several Americans, one of them for trying to proselytize, and they were often freed only after high-profile negotiations. North Korea has said that former President Jimmy Carter asked for Jun's pardon during a visit last month.

North Korea officially guarantees freedom of religion but often cracks down on Christians, who are seen as a Western-influenced threat. The distribution of Bibles and secret prayer services can mean banishment to a labor camp or execution, defectors have said.