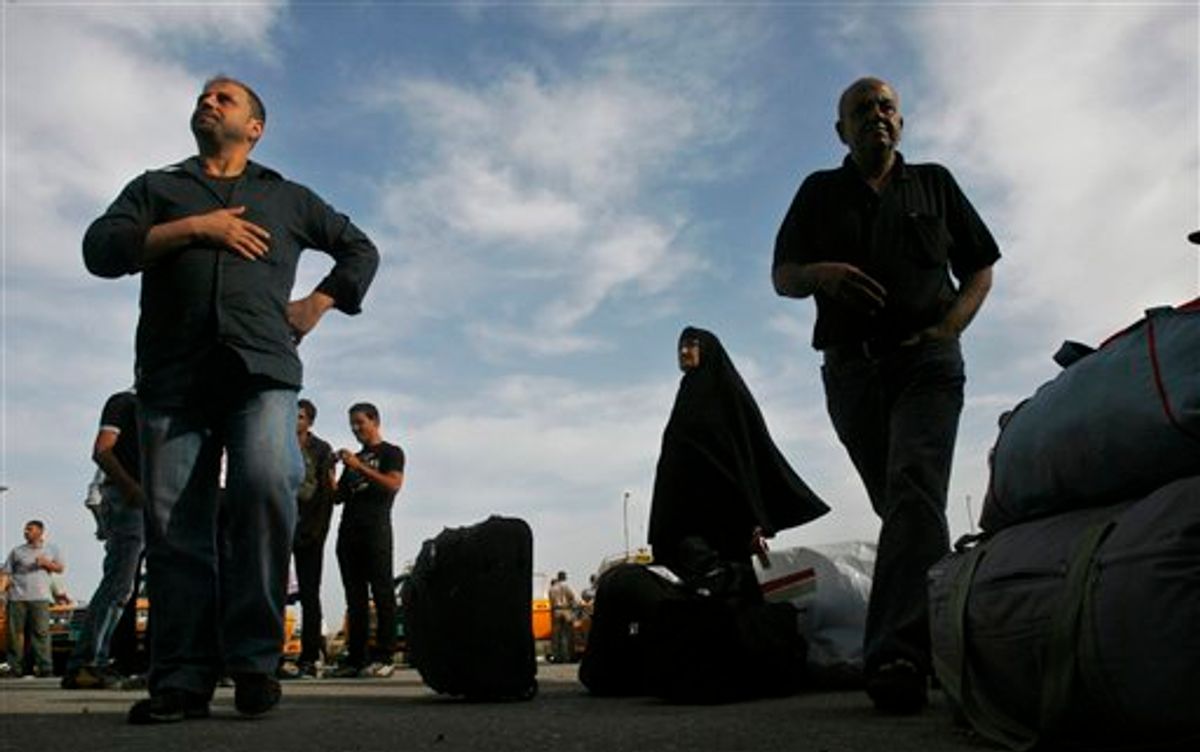 Palestinians wait next to their belongings before crossing into Egypt through the Rafah border crossing, southern Gaza Strip, Thursday, May 26, 2011. Egypt's decision to end its blockade of Gaza by opening the only crossing to the Hamas-ruled Palestinian territory this weekend could ease the isolation of 1.4 million Palestinians there. (AP Photo/Eyad Baba) (AP)
--

Egypt lifted a four-year-old blockade on the Gaza Strip's main link to the outside world Saturday, bringing relief to the crowded territory's 1.5 million Palestinians but deepening a rift with Israel since the ouster of President Hosni Mubarak earlier this year.

The Egyptian move will allow thousands of Gazans to move freely in and out of the area -- heightening Israeli fears that militants and weapons could easily reach its doorstep.

Israel and Egypt imposed the blockade after the Islamic militant Hamas seized control of Gaza in June 2007. The closure, which also included tight Israeli restrictions at its cargo crossings with Gaza and a naval blockade, was meant to weaken Hamas, but it also fueled an economic crisis in the densely populated territory.

Hundreds of Gazans gathered early Saturday as the first bus load of passengers crossed the border at 9 a.m. Two Egyptian officers stood guard next to a large Egyptian flag atop the border gate as the vehicle rumbled through.

Rami Arafat, 52, was among the earliest arrivals. He said he hoped to catch a flight out of Cairo on Sunday to Algeria for his daughter's wedding.

"All we need is to travel like humans, be treated with dignity, and feel like any other citizens of the world who can travel in and out freely," Arafat said. He said he believed the relaxing of travel restrictions "will guarantee more support from all Arabs and Palestinians for the new Egyptian regime."

Nearby, 28-year-old Khaled Halaweh said he was headed to Egypt to study for a master's degree in engineering at Alexandria University.

"The closure did not affect only the travel of passengers or the flowing of goods. Our brains and our thoughts were under blockade," said Halaweh, who said he hadn't been out of Gaza for seven years.

Until Saturday, the Rafah border terminal had functioned at a limited capacity. Only certain classes of people, such as students, businessmen or medical patients, were eligible to travel and the crossing was often subject to closures, leading to huge backlogs that forced people to wait for months.

Under the new system, most restrictions are being lifted, and a much larger number of Palestinians are expected to be able to cross each day.

Inside the border terminal Saturday, the atmosphere was orderly, as Hamas police called up passengers one by one to register their travel documents.

After 5 1/2 hours of operation, terminal officials said 340 people had crossed from Gaza into Egypt. None were forced to return, a departure from the past when Egypt had rejected passengers found to be on "blacklists." Another 150 people crossed from Egypt into Gaza.

"Today is a cornerstone for a new era that we hope will pave the road to ending the siege and blockade on Gaza," said Hatem Awideh, director general of the Hamas border authority in Gaza. "We hope this facilitation by our Egyptian brothers will improve travel and will allow everyone to leave Gaza."

One after another buses crossed Rafah, pulling blue carts behind them with luggage piled high. Inside the terminal, many waited with high hopes.

One woman, who gave her name as Aisha, said she was headed for a long overdue medical checkup in Cairo. She underwent surgery for blocked arteries at a Cairo hospital in October, but Egyptian authorities had prevented her from returning for checkups because a distant relative was caught -- and killed -- operating a smuggling tunnel on the Gaza-Egypt border. During the four-year blockade, a thriving smuggling business has grown along the border.

Salama Baraka, head of police at the Rafah terminal on the Gaza side, said travel has been limited to about 300 passengers a day under the old system. He said it was unclear how many people would pass through Saturday, but that officials hoped to get about three days' worth of people, or roughly 900, across.

About 100 Hamas supporters marched with Palestinian and Egyptian flags outside the border terminal in a gesture of gratitude to Egypt.

"This courageous step by Egypt reflects the deep historic relations between the Palestinian and Egyptian nations," said Hamas spokesman Sami Abu Zahri. "We hope this will be a step in the long process to end the blockade imposed on Gaza."

The new system will not resolve Gazans' travel woes completely.

While Egypt has dropped its restrictions on who can travel, bureaucratic obstacles remain. Men between the ages of 18 and 40 will have to apply for Egyptian visas, a process that can take weeks. Women, children and older men need easier-to-obtain travel permits, which can be obtained in several days.

Israel, which controls Gaza's cargo crossings, allows most consumer goods into Gaza, but it still restricts exports as well as the entry of much-needed construction materials, saying they could be used by militants. Israel also enforces a naval blockade aimed at weapons smuggling.

Israeli and American officials have expressed concerns that Hamas will exploit the opening to bring weapons and fighters into Gaza. In January 2008, masked militants blew open the Rafah border wall, allowing thousands of people to pour in and out of Egypt.

Egyptian officials say they have security measures in place to keep weapons from crossing through Rafah.

Hamas has long used tunnels to get arms into Gaza. Gaza militants now have military-grade rockets that have hit cities in southern Israel.

"One trainer who tells them how to set up the rockets and how to use them is equal to a large quantity of weapons," Gilad said.

Egypt's decision to open the border is also meant to boost an Egyptian-mediated unity deal between the rival Palestinian factions Hamas and Fatah. Hamas has governed Gaza since routing Fatah forces in 2007, leaving the Fatah-dominated Palestinian Authority in control only of the West Bank.