Why I'm still hot for my wife

After the Schwarzenegger and Strauss-Kahn scandals, I'm starting to feel like the odd man out. But am I? 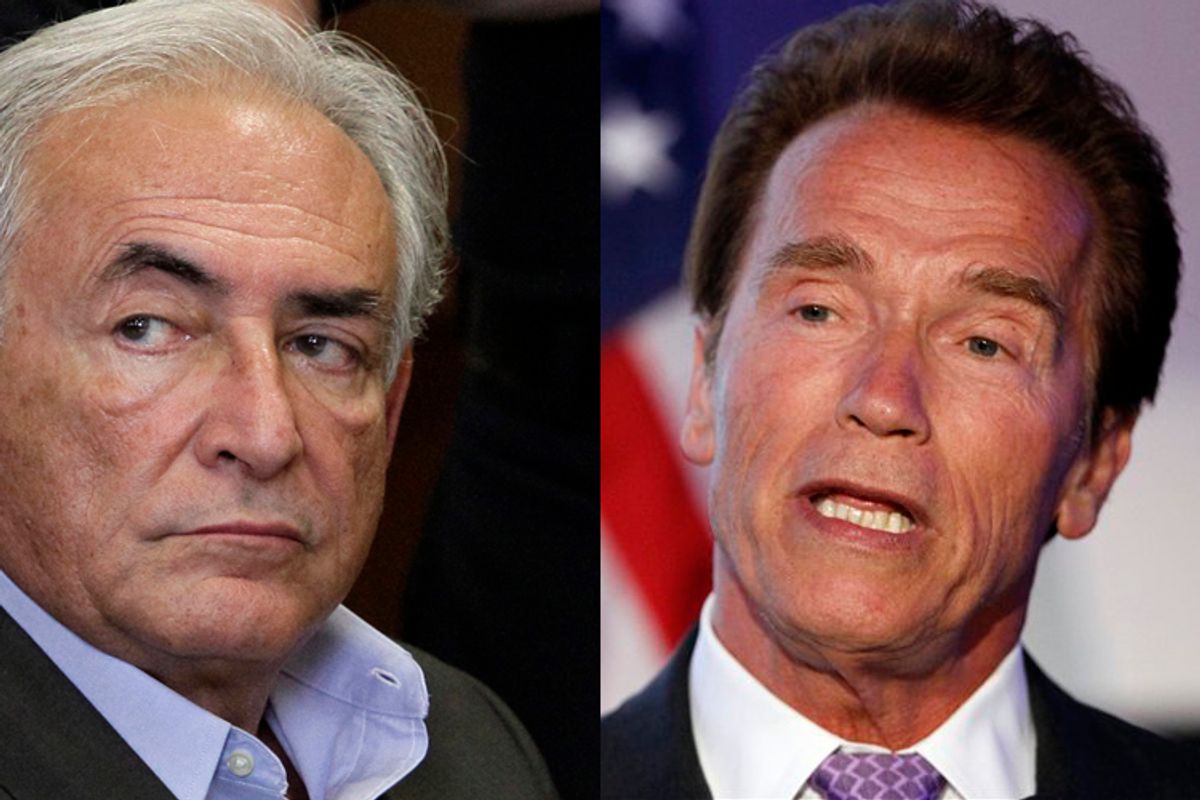 In a May 10, 2011 photo Arnold Schwarzenegger speaks at the Israel 63rd Independence Day Celebration hosted by the Consulate General of Israel in Los Angeles. Schwarzenegger has acknowledged that he fathered a child with a member of his household staff, (AP Photo/Matt Sayles) (Matt Sayles)
--

Long-term marriages rank with fools, barflies and traveling salesmen as a classic butt of American jokes.

I married her 60 years ago, and right away I knew it was a mistake!

Their punch lines testify to nagging, sniping, dissatisfaction and the loss of romance. Their baseline assumption is that a lengthy marriage is sexless or, at best, sexually worn out.

Darling, do you remember the first time we made love?

These days, there's a new rack of clever, grim headlines for comedians to invent:

"IMF head sits in jail, waiting for a bail-out"

Meanwhile, I'm sitting at home, practicing my punditry and wondering why it is that after 36 years with the same woman -- with whom I have made love more than 3,000 times -- there's nothing I'd like better right now than to go into the next room to strip off her clothes.

After all, I don't really have much to say about Arnold and Maria. They've asked for privacy; I offer them indifference. I didn't really know who Maria Shriver was, beyond her name (I don't follow television news), until her husband ran for governor -- and even today, after his two terms in office, I think of Arnold Schwarzenegger as a well-cast actor in a terrific sci-fi movie about robots. Judging from the Wiki versions of their lives -- her father founded the Peace Corps, his father was a Nazi; she spends her spare time hugging people with disabilities, he spends his spare time grabbing ass -- I find it astounding that they made it to their 25th anniversary.

As for Dominique Strauss-Kahn -- like Schwarzenegger, married to a famous television journalist and driven to frenzy by the sight of a housekeeper -- his alleged aggression is incomprehensible to me. What satisfaction does a man derive from rape (or, for that matter, hiring a woman for sex)? My own sexuality is so much about my desire to be desired that the thought of sex without reciprocity leaves me limp.

Schwarzenegger, Strauss-Kahn and I are about the same age (I'm the junior one at 59), so I can testify that none of us are testosterone-crazed (unless Arnold's taking supplements). That's where our peership ends, however. The two of them are multimillionaires, political bigwigs, media stars, with guys like me in their employ. That means I've had every advantage over them in terms of keeping together a long, happy marriage.

It takes a girlie-man to do it.

That's what Schwarzenegger has been calling his political opponents since he campaigned for George W. Bush in 1988: "girlie-men." It seems he wasn't just acting in those "Terminator" films: He is a major-league alpha-ape fool.

Oh, it's hard to be a girlie-man in this flaunt-and-taunt culture of ours. Quick, name one hit rock 'n' roll classic that explicitly celebrates long-term relationships. I can think of exactly one: Orleans' happy number, "Still the One" ("We're still having fun, and you're still the one"), which made it to No. 5 in 1976 -- a year that included No. 1 hits like Paul Simon's "Fifty Ways to Leave Your Lover," Elvin Bishop's "Fooled Around and Fell in Love," and Johnnie Taylor's "Disco Lady" --

"If it wasn't for the girl sittin' next to me

I'd jump right up and outta my safety seat

You got me hypnotized, soul-mesmerized ..."

Whew. I've looked at these scenes of sex without kissing, without caring, without communion, and all I do is shudder. Is that what men really want? I can't relate.

It took a long while to achieve that status. For years, in fact, my poor wife was convinced that I'd someday renounce the comfort and intimacy of "the girl sittin' next to me" and be "soul-mesmerized" by some hot Disco Lady. She knew that I sometimes felt frustrated by the sexual boundaries of monogamy; she knew that I would say yes to the right woman in the right situation (the only vow I'd made about having sex with other people was that I would not lie to her about it, neither to her face nor by omission). Therefore it was inevitable, she believed, that I would someday fool around and fall in love.

It took until our own 25th anniversary -- as well as two tepid, fully disclosed flings (finally, the right women in the right situations!) -- for me to look her full in the face and say: "Hey, you can stop worrying. I'm never going to leave you. Not until I die."

I had finally reached an age, I explained, at which it might actually feel downright weird to get naked and share kisses and bodily fluids with a stranger. Certainly I could never match with another woman the level of trust, intimacy and freedom that she and I have in the sack. "It's like, the longer we're together," I said, "the more like virgins we become."

Virgins, indeed: sharing a bed, a refrigerator, a toilet bowl, for 36 years; sharing the mutual benefit of our successes and the mutual "oh, well" of our disappointments; sharing the incredible good fortune of having a person who really cares, knows, hears and sees; sharing a life in partnership, both of us made stronger and braver by our hand-holding.

Now, that's the woman I want to make love with! C'mere, you!

Maybe strange flesh would still tempt me, but it barely ever passes through my field of vision: I'm a busy writer living in the country, where I see more squirrels than human beings in the course of any given week. Besides, what woman in her right mind would want to have a fling with me (notwithstanding my dimples)? I don't represent danger or adventure, I don't have bulging biceps, a motorcycle, a private jet, or a big roll of bills -- and I'm famous only for my happy marriage.

And I'm so out of practice at groping! -- first, because I need to be groped before I will grope, and second, because once a man learns to see women first as human beings, second as sex objects, it becomes difficult to reverse the order.

That learning took me years to accomplish -- to lose enough of my vanity and my egotism, to feel some slackening of testosterone's grip, to raise a beloved daughter to the age at which I met her mother, and to rewrite a few punch lines. Not:

Marriage is the process of finding out what kind of man your wife would have preferred.

Marriage is the process of becoming the kind of man your wife can keep loving.

But bless my soul, I'm a girlie-man at last.