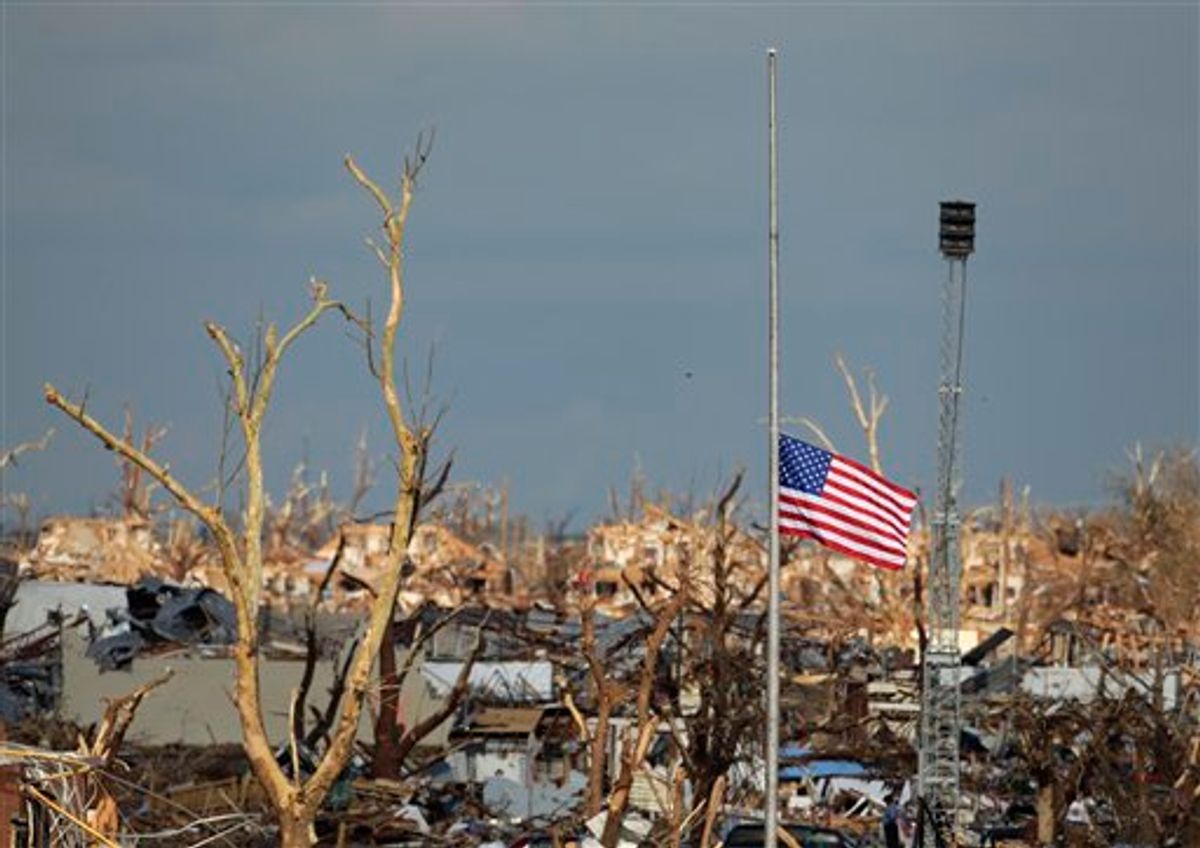 A flag files at half staff over devastated Joplin High School next to a portable tornado siren in Joplin, Mo. Thursday, May 26, 2011. An EF-5 tornado tore through much of the city Sunday, damaging a hospital and hundreds of homes and businesses and killing at least 125 people. (AP Photo/Charlie Riedel) (AP)
--

The death toll from the monster tornado last week in Missouri has risen by seven to at least 139, city spokeswoman Lynn Onstot said Saturday. That makes this the deadliest year for tornadoes since 1950, based on an assessment of figures from the National Weather Service.

The tornado death toll for 2011 is now 520. Until now, the highest recorded death toll in a single year was 519 in 1953. There were deadlier storms before 1950, but those counts were based on estimates and not on precise figures.

Missouri says the number of people still unaccounted for since the Joplin tornado is now at 105. State Department of Public Safety deputy director Andrea Spillars said Saturday that within that number, nine people have been reported dead by their families, but state officials are working to confirm. She said that the temporary morgue has 142 human remains, but that includes partial remains.

"Some of those remains may be the same person," she said, adding that officials are trying to use scientific means rather than relying on relatives giving visual identifications.

The state has been working to pare down the list of people missing and unaccounted for in the wake of the deadliest single U.S. twister in more than six decades.

City manager Mark Rohr acknowledged Friday afternoon that there may be "significant overlap" between the confirmed dead and the remainder of the missing list. Still, search and rescue crews were undeterred, with 600 volunteers and 50 dog teams out again across the city.

"We're going to be in a search and rescue mode until we remove the last piece of debris," Rohr said.

The tornado -- an EF5 packing 200 mph winds -- was the deadliest since 1950 and more than 900 people were injured. Tallying and identifying the dead and the missing has proven a complex, delicate and sometimes confusing exercise for both authorities and loved ones.

Earlier Saturday, a family member said that a teenager believed to be ejected or sucked from his father's car on the way home from graduation in the massive tornado has been confirmed dead. Will Norton's aunt, Tracey Presslor, said Saturday that the family received confirmation of his death late Friday night.

Family members had previously told The Associated Press that Norton and his father were still on the road when the storm hit. Mark Norton urged his son to pull over, but the teen's Hummer H3 flipped several times, throwing the young man from the vehicle, likely through the sunroof.