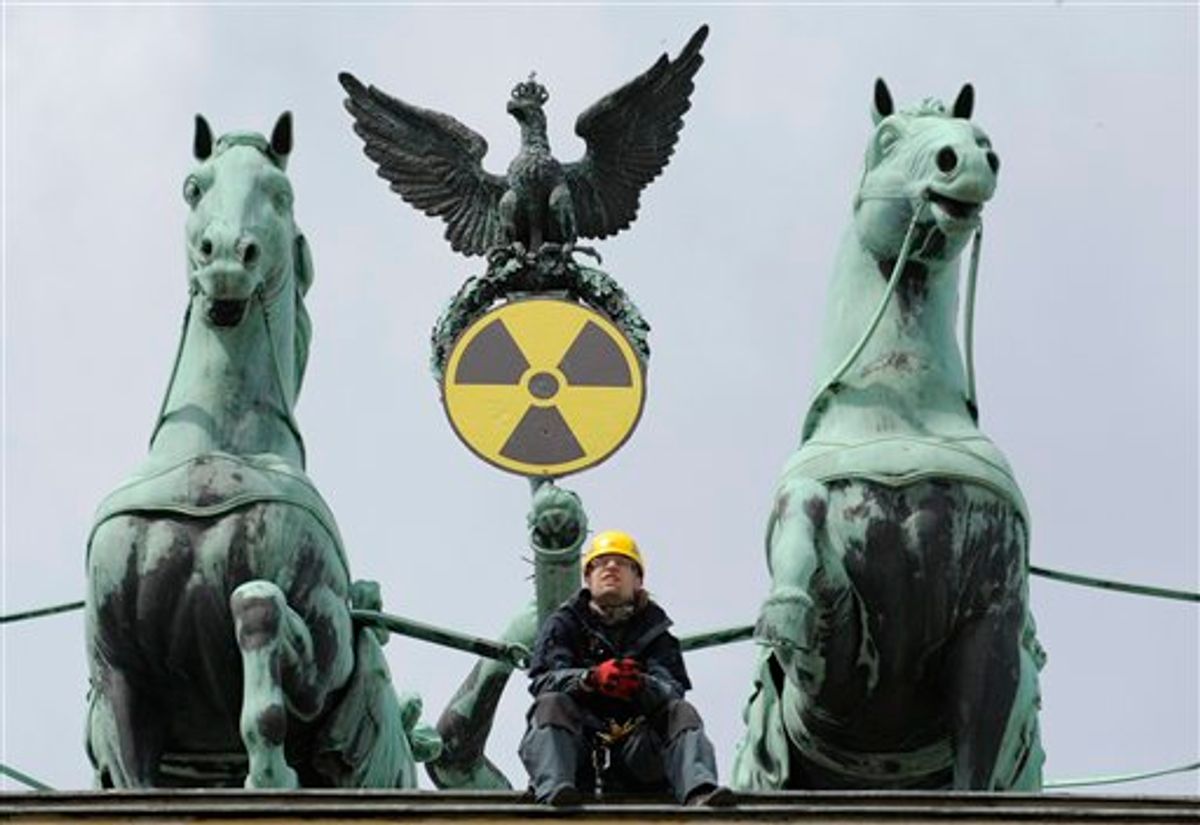 An environmental activist sits on top of the Brandenburg Gate after Greenpeace activists fixed a radioactive sign to the Quadriga in Berlin, Sunday May 29, 2011 to protest against the nuclear power policy of German Government. (AP Photo/dapd/Michael Gottschalk) (AP)
--

Germany's coalition government agreed early Monday to shut down all the country's nuclear power plants by 2022, the environment minister said, making it the first major industrialized nation in the last quarter century to announce plans to go nuclear-free.

Roettgen praised the coalition agreement after negotiations through the night between the governing parties.

"This is coherent. It is clear," he told reporters in Berlin. "That's why it is a good result."

Chancellor Angela Merkel pushed through measures in 2010 to extend the lifespan of the country's 17 reactors, with the last one scheduled to go offline in 2036, but she reversed her policy in the wake of the Japanese disaster.

"We want the electricity of the future to be safe, reliable and economically viable," Merkel told reporters on Monday.

"We have to follow a new path," Merkel said.

Through March -- before the seven reactors were taken offline -- just under a quarter of Germany's electricity was produced by nuclear power, about the same share as in the U.S.

Energy from wind, solar and hydroelectric power currently produces about 17 percent of the country's electricity, but the government aims to boost its share to around 50 percent in the coming decades.

Many Germans have been vehemently opposed to nuclear power since Chernobyl sent radioactive fallout over the country. Tens of thousands repeatedly took to the street in the wake of Fukushima to urge the government to shut all reactors.

A center-left government a decade ago first penned a plan to abandon the technology for good because of its inherent risks by 2021. But Merkel's government last year amended it to extend the plants' lifetime by an average of 12 years.

But the conservative chancellor reversed her pro-nuclear stance after the earthquake and tsunami that crippled the Fukushima Dai-ichi plant on March 11, triggering nuclear meltdowns.

Merkel's government ordered the country's seven oldest reactors, all built before 1980, shut down four days after the Fukushima incident. The plants accounted for about 40 percent of the country's nuclear power capacity.

Germany used to be a net energy exporter, and the agency overseeing its electricity grid said Friday that the country remains self-sufficient even without the seven reactors and another plant that has already been offline for more than a year for maintenance work.

The coalition government's decision broadly follows the conclusions of a government-mandated commission on the ethics of nuclear power, which delivered its recommendation to abolish the technology by 2022 on Saturday. Details of the final report are to be presented later Monday.

Shutting down even more reactors, however, will require billions of euros of investment in renewable energies, more natural gas power plants and an overhaul of the country's electricity grid.

The government of neighboring Switzerland, where nuclear power produces 40 percent of the country's electricity, also announced last week that it plans to shut down its reactors gradually once they reach their average lifespan of 50 years -- which would mean taking the last plant off the grid in 2034.