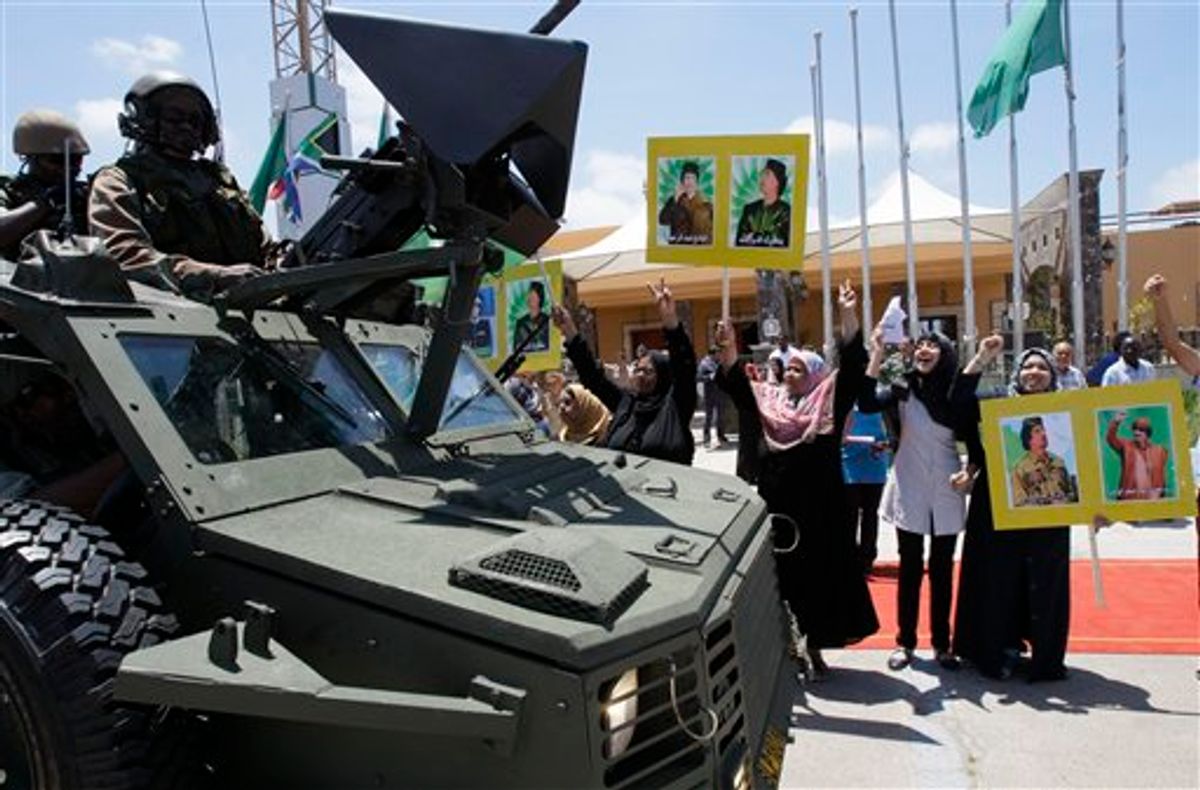 South Africa's president huddled with Libya's embattled ruler Monday, a rare visit by a head of state whose mission appeared to be to try to persuade Moammar Gadhafi to step down.

The president, Jacob Zuma, was greeted with all the requisite fanfare by Gadhafi's beleaguered regime. Dozens of Gadhafi supporters, bused in for the welcoming, waved green Libyan flags and chanted slogans denouncing the NATO bombing campaign against Libyan government targets.

NATO temporarily lifted its no-fly zone over Libya to allow Zuma's South African air force plane to land at the main military air base next to Tripoli.

In Rome Monday, an indication that Gadhafi's regime is losing support came from eight top Libyan army officers, including five generals, who defected from Gadhafi's military. They appealed to their fellow officers to join the revolt.

Several senior officials, including at least three Cabinet ministers, have abandoned Gadhafi during the uprising that began in February. Even so, he clings tenaciously to power, and the military units still loyal to him are far superior to the forces available to the rebels.

One of the officers, Gen. Melud Massoud Halasa, estimated that Gadhafi's military forces are now "only 20 percent as effective" as what they were before the revolt broke out in mid-February, and that "not more than 10" generals remain loyal to Gadhafi.

Gen. On Ali On read an appeal to fellow army officers and top police and security officials "in the name of the martyrs who have fallen in the defense of freedom to have the courage" to abandon the regime.

The general, wearing street clothes like his fellow defectors, denounced both "genocide" and "violence against women in various Libyan cities."

The Zuma visit came during relentless NATO bombing runs on Tripoli and other parts of the country, aimed at weakening Gadhafi's military and giving the outgunned rebels a chance in their battle against the longtime ruler.

Though relations between Gadhafi and the African Union have been strained, Zuma has joined other African leaders in accusing NATO of overstepping its U.N. mandate to protect Libyan civilians and calling for an end to the airstrikes.

Zuma's meeting with Gadhafi at his Bab al-Aziziyah compound was attended by only two other people, according to a Libyan official who spoke on condition of anonymity because he was not at liberty to discuss the talks. No other details were disclosed. Zuma did not speak to reporters.

Zuma had two goals in meeting Gadhafi, according to officials and experts. His official mission was to try to resuscitate a mediation effort by the African Union for a cease-fire. Zuma headed an African Union mission to Tripoli in April to try to promote the initiative, but it did not produce results -- further tarnishing the image of the organization.

In April, Gadhafi said he would accept the truce but quickly ignored it and resumed his attacks, while the rebels rejected the cease-fire out of hand because it did not include Gadhafi's exit from power. Since then many cease-fire efforts have failed for similar reasons.

The unofficial purpose of Zuma's second trip was to try to persuade Gadhafi to relinquish control of Libya after 42 years in power, according to South Africa's influential Mail and Guardian newspaper, quoting a senior security official.

For decades Gadhafi has identified Libya as an African as much as an Arab nation. He disbursed millions of dollars in aid to African nations and built himself up as a leader of the continent.

Additional reporting by Frances D'Emilio on Rome and Michelle Faul in Benghazi, Libya.