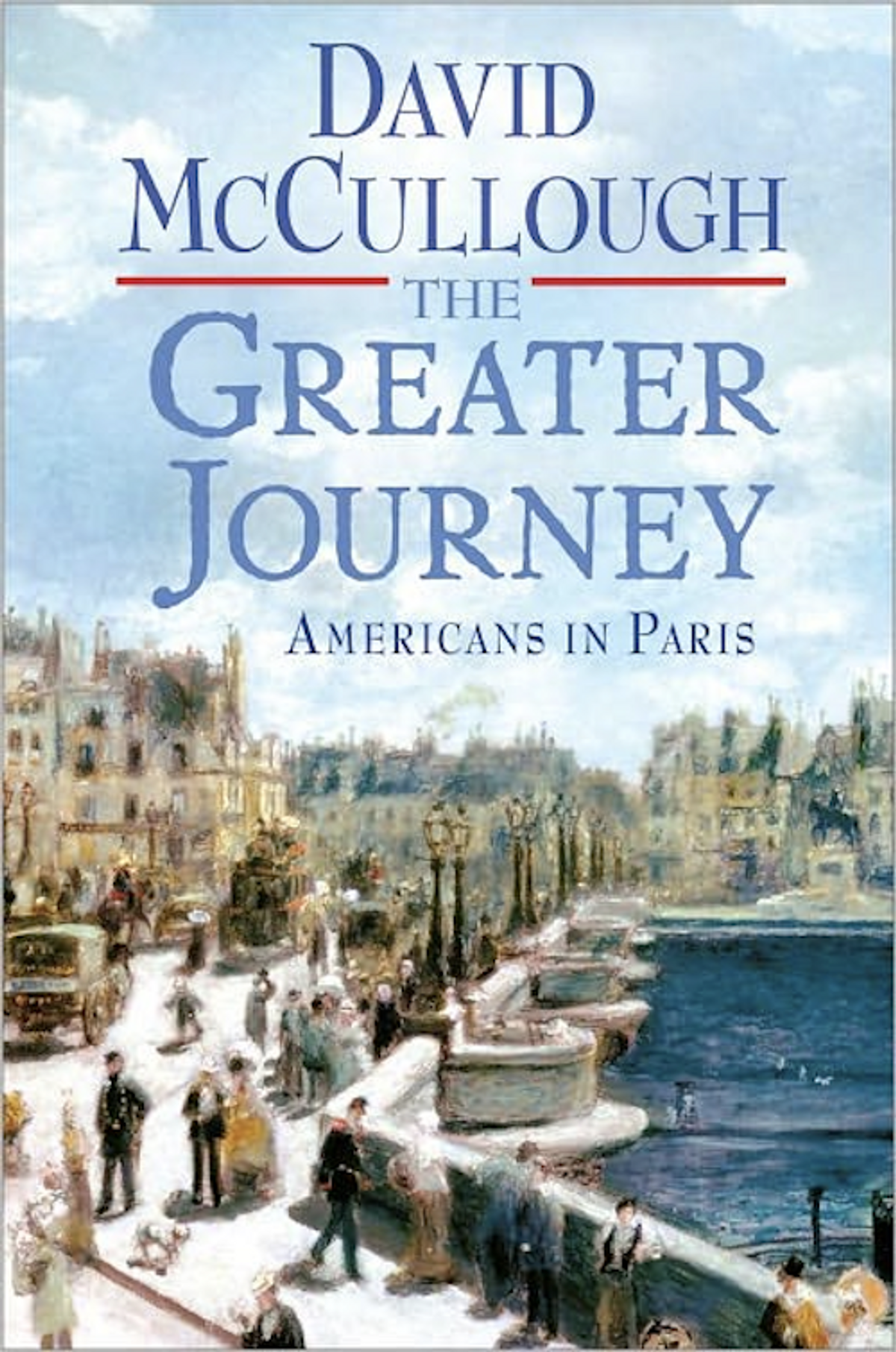 "Not all pioneers went west" -- with these charming, if misleading words, David McCullough launches his long, fascinating account of American residents in Paris in the 19th century.

They were not pioneers, of course, in the usual sense. There were no covered wagons, no endless plains and empty prairies, no hostile natives (except for the occasional glowering concierge). Instead, McCullough, Pulitzer Prize-winning author of "Truman" and "John Adams," has given a new twist to the idea of blazing a trail and has taken for his subject a version of that oldest and richest of literary dramas, as ancient at least as Homer and Odysseus: Someone Goes on a Great Journey. And he has given it a distinctively American form -- The New World Meets the Old.

His cast of characters is refreshingly original. He skips right past those first celebrated American expatriates in the City of Light, Benjamin Franklin and Thomas Jefferson, and begins his story in the 1830s, with a wave of young New Englanders who, over the course of the decade, cast off from Boston in two-masted sailing ships and made the dangerous, arduous month-long voyage to Le Havre. From there they rumbled off in enormous 15-passenger stagecoaches called diligences for the 24-hour bone-cracking trip to Paris, usually stopping at Rouen to stretch their legs and view for the first time the astonishing beauty of a medieval Catholic cathedral.

Some 50 years earlier Abigail Adams had written a friend from Paris, with an audible snort of Puritan disapproval: "If you ask me what is the business of life here? I answer, pleasure." It was -- and still is, mercifully -- an accurate description of Parisian life, but McCullough's travelers, though not immune to pleasure, all came with deeply serious purposes. Roughly speaking, they were divided between artists and medical students, both groups drawn by the fact that what Paris offered in the way of resources and schooling could be duplicated nowhere else in the world, certainly not in the turbulent, rollicking cultural adolescence of Jacksonian America.

This first wave of Americans in Paris includes some familiar names -- Samuel F. B. Morse, who began his life as a painter before becoming "The Lightning Man," inventor of the telegraph; Oliver Wendell Holmes Sr., who would become dean of the Harvard Medical School and a founder of the Atlantic Monthly; Charles Sumner, later senator from Massachusetts and leading abolitionist. But there are less familiar pilgrims as well -- Holmes' friend Thomas Appleton, for example, author of the much-repeated quip, "Good Americans, when they die, go to Paris." Or Emma Willard, founder of the Troy (N.Y.) Female Seminary, who frowned at the French tolerance for nude statues, but became a great opera-goer and student of ladies' fashions.

McCullough loads these pages with marvelous anecdotes and word pictures. We have Morse swaying at the top of a rickety scaffold as he copies paintings in the Louvre, observed and encouraged by none other than James Fenimore Cooper, a longtime Parisian. We follow his young Bostonians into a restaurant at the Palais Royal, where they goggle at the immense number of mirrors and at menus the size of newspapers. We watch over Sumner's shoulder as he recognizes, in a life-altering flash of insight, that the black students in his classroom at the Sorbonne are as able as the whites. McCullough has a keen eye for the memorable quotation -- Nathaniel Willis writes of the ballerina Marie Taglioni, "She swims in your eye like a curl of smoke." His long chapter on American medical students is particularly absorbing, as he traces their daily routines in the Latin Quarter's renowned École de Médecine. Though if we needed reminding of the primitive nature of 19th-century medicine, we have only to turn to his horrifying account of surgery in the school's amphitheatre, when as many as 600 students could practice operations at the same time. (The discarded limbs and body parts were fed to dogs kept in cages outside.)

But as the century wears on, as sailing ships and diligences are replaced by steamships and trains, McCullough's narrative grows more diffuse and less focused. There were perhaps fewer than a thousand Americans resident in Paris when his first wave arrives from New England in the 1830s. After the Civil War, travel is far easier and cheaper and their numbers swell. By 1867 the number of American residents in Paris quadruples. His small band of "pioneers" becomes a parade of tourists and famous names -- Hawthorne, Twain, Harriet Beecher Stowe, P. T. Barnum -- all of them drawn to Paris like moths to a candle, but none of them united in purpose (or age) as the earlier band had been. For pages at a time Paris seems a background rather than a theme.

Then, in two superb chapters on the now obscure American ambassador Elihu Washburne, McCullough regains his momentum. Using a long-forgotten diary from Washburne's family papers, he reconstructs in thrilling detail the ambassador's heroic behavior during the Prussian Siege of Paris in 1870 and the bloodcurdling days of the Commune that followed. It is a wonderful fusion of character description and historical research. And from this point on, McCullough concentrates in satisfying and often moving detail on the careers of three great American artists who find their inspiration and release in the great Capital of Art: the sculptor Augustus Saint-Gaudens and the painters John Singer Sargent and Mary Cassatt.

There are a few small errors of fact (Washburne, for example, was not present when Grant met Lee at Appomattox) and some readers may wonder why Emerson, who had a visionary transcendentalist moment in the Jardin des Plantes, is not given more space, or why no use is made of Peter Brooks' recent brilliant book "Henry James Goes to Paris." But these would be quibbles. On the great central thing, the indefinable power of Paris to awaken a sense of beauty, he is exactly right. He quotes Harriet Beecher Stowe, whose love of Paris grew in part from her feeling that American life had cheated her: "With all New England's earnestness and practical efficiency, there is a long withering of the soul's more ethereal part -- a crushing out of the beautiful -- which is horrible."

But David McCullough, though he also lives in New England, has clearly suffered no such crushing of the soul's ethereal part. He is 78 years old, yet his book reads like a young man's book -- full of enthusiasm, fresh pleasure, delight in the world, and delight especially in the great luminous city that seems as he writes to lie open before him like a poem.