Everything you've heard about fossil fuels may be wrong

The future of energy is not what you think it is 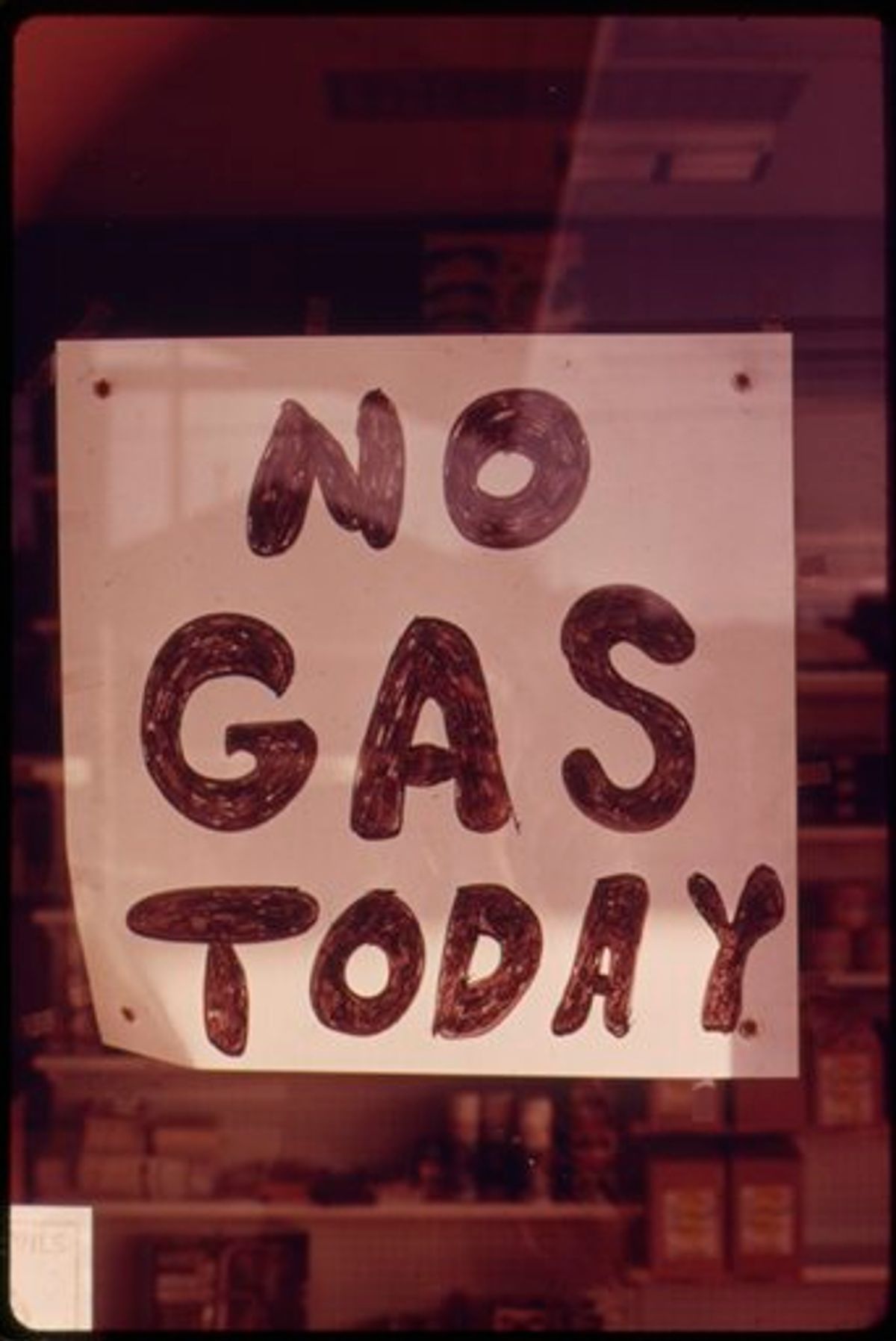 In this Oct. 1973 photo provided by the U.S. National Archives, a sign hangs in the window of a gas station in Lincoln City, Ore. The photo is part of Documerica, an EPA project during the 1970s in which the agency hired dozens of freelance photographers to capture thousands of images related to the environment and everyday life in America. Modeled after Documerica, the agency has embarked on a massive effort to collect photographs from across the United States and around the world over the next year that depict everything from nature's beauty to humanity's impact, both good and bad. (AP Photo/U.S. National Archives, David Falconer) (AP)
--

Are we living at the beginning of the Age of Fossil Fuels, not its final decades? The very thought goes against everything that politicians and the educated public have been taught to believe in the past generation. According to the conventional wisdom, the U.S. and other industrial nations must undertake a rapid and expensive transition from fossil fuels to renewable energy for three reasons: The imminent depletion of fossil fuels, national security and the danger of global warming.

What if the conventional wisdom about the energy future of America and the world has been completely wrong?

As everyone who follows news about energy knows by now, in the last decade the technique of hydraulic fracturing or "fracking," long used in the oil industry, has evolved to permit energy companies to access reserves of previously-unrecoverable “shale gas” or unconventional natural gas. According to the U.S. Energy Information Administration, these advances mean there is at least six times as much recoverable natural gas today as there was a decade ago.

Natural gas, which emits less carbon dioxide than coal, can be used in both electricity generation and as a fuel for automobiles.

The implications for energy security are startling. Natural gas may be only the beginning. Fracking also permits the extraction of previously-unrecoverable “tight oil,” thereby postponing the day when the world runs out of petroleum. There is enough coal to produce energy for centuries. And governments, universities and corporations in the U.S., Canada, Japan and other countries are studying ways to obtain energy from gas hydrates, which mix methane with ice in high-density formations under the seafloor. The potential energy in gas hydrates may equal that of all other fossils, including other forms of natural gas, combined.

If gas hydrates as well as shale gas, tight oil, oil sands and other unconventional sources can be tapped at reasonable cost, then the global energy picture looks radically different than it did only a few years ago. Suddenly it appears that there may be enough accessible hydrocarbons to power industrial civilization for centuries, if not millennia, to come.

So much for the specter of depletion, as a reason to adopt renewable energy technologies like solar power and wind power. Whatever may be the case with Peak Oil in particular, the date of Peak Fossil Fuels has been pushed indefinitely into the future. What about national security as a reason to switch to renewable energy?

The U.S., Canada and Mexico, it turns out, are sitting on oceans of recoverable natural gas. Shale gas is combined with recoverable oil in the Bakken "play" along the U.S.-Canadian border and the Eagle Ford play in Texas. The shale gas reserves of China turn out to be enormous, too. Other countries with now-accessible natural gas reserves, according to the U.S. government, include Australia, South Africa, Argentina, Chile, France, Poland and India.

Because shale gas reserves are so widespread, the potential for blackmail by Middle Eastern producers and Russia will diminish over time. Unless opponents of fracking shut down gas production in Europe, a European Union with its own natural gas reserves will be far less subject to blackmail by Russia (whose state monopoly Gazprom has opportunistically echoed western Greens in warning of the dangers of fracking).

The U.S. may become a major exporter of natural gas to China -- at least until China borrows the technology to extract its own vast gas reserves.

Two arguments for switching to renewable energy -- the depletion of fossil fuels and national security -- are no longer plausible. What about the claim that a rapid transition to wind and solar energy is necessary, to avert catastrophic global warming?

The scenarios with the most catastrophic outcomes of global warming are low probability outcomes -- a fact that explains why the world’s governments in practice treat reducing CO2 emissions as a low priority, despite paying lip service to it. But even if the worst outcomes were likely, the rational response would not be a conversion to wind and solar power but a massive build-out of nuclear power. Nuclear energy already provides around 13-14 percent of the world’s electricity and nearly 3 percent of global final energy consumption, while wind, solar and geothermal power combined account for less than one percent of global final energy consumption.

(The majority of renewable energy consists of CO2-emitting biomass -- wood and dung used for fires by the world’s poor, plus crops used to make fuel; most of the remainder comes from hydropower dams denounced by Greens.)

The disasters at Chernobyl and Fukushima have dramatized the real but limited and localized dangers of nuclear energy. While their initial costs are high, nuclear power plants generate vast amounts of cheap electricity -- and no greenhouse gases. If runaway global warming were a clear and present danger rather than a low probability, then the problems of nuclear waste disposal and occasional local disasters would be minor compared to the benefits to the climate of switching from coal to nuclear power.

The arguments for converting the U.S. economy to wind, solar and biomass energy have collapsed. The date of depletion of fossil fuels has been pushed back into the future by centuries -- or millennia. The abundance and geographic diversity of fossil fuels made possible by technology in time will reduce the dependence of the U.S. on particular foreign energy exporters, eliminating the national security argument for renewable energy. And if the worst-case scenarios for climate change were plausible, then the most effective way to avert catastrophic global warming would be the rapid expansion of nuclear power, not over-complicated schemes worthy of Rube Goldberg or Wile E. Coyote to carpet the world’s deserts and prairies with solar panels and wind farms that would provide only intermittent energy from weak and diffuse sources.

The mainstream environmental lobby has yet to acknowledge the challenge that the new energy realities pose to their assumptions about the future. Some environmentalists have welcomed natural gas because it is cleaner than coal and can supplement intermittent solar power and wind power, at times when the sun isn’t shining or the wind isn’t blowing. But if natural gas is permanently cheaper than solar and wind, then there is no reason, other than ideology, to combine it with renewables, instead of simply using natural gas to replace coal in electricity generation.

Without massive, permanent government subsidies or equally massive penalty taxes imposed on inexpensive fossil fuels like shale gas, wind power and solar power may never be able to compete. For that reason, some Greens hope to shut down shale gas and gas hydrate production in advance. In their haste, however, many Greens have hyped studies that turned out to be erroneous.

In 2010 a Cornell University ecology professor and anti-fracking activist named Robert Howarth published a paper making the sensational claim that natural gas is a greater threat to the climate than coal. Howarth admitted, "A lot of the data we use are really low quality..."

Howarth’s error-ridden study was debunked by Michael Levi of the Council on Foreign Relations and criticized even by the Worldwatch Institute, a leading environmentalist organization, which wrote: "While we share Dr. Howarth’s urgency about the need to transition to a renewable-based economy, we believe based on our research that natural gas, not coal, affords the cleanest pathway to such a future."

A few years ago, many Green alarmists seized upon a theory that an ice age 600 million years ago came to an abrupt end because of massive global warming caused by methane bubbling up from the ocean floor. They warned that the melting of the ice caps or drilling for methane hydrates might suddenly release enough methane to cook the earth. But before it could be turned into a Hollywood blockbuster, the methane apocalypse theory was debunked recently by a team of Caltech scientists in a report for the science journal Nature.

All energy sources have potentially harmful side effects. The genuine problems caused by fracking and possible large-scale future drilling of methane hydrates should be carefully monitored and dealt with by government regulation. But the Green lobby’s alarm about the environmental side-effects of energy sources is highly selective. The environmental movement since the 1970s has been fixated religiously on a few "soft energy" panaceas -- wind, solar, and biofuels -- and can be counted on to exaggerate or invent problems caused by alternatives. Many of the same Greens who oppose fracking because it might contaminate some underground aquifers favor wind turbines and high-voltage power lines that slaughter eagles and other birds and support blanketing huge desert areas with solar panels, at the cost of exterminating much of the local wildlife and vegetation. Wilderness preservation, the original goal of environmentalism, has been sacrificed to the giant metallic idols of the sun and the wind.

The renewable energy movement is not the only campaign that will be marginalized in the future by the global abundance of fossil fuels produced by advancing technology. Champions of small-scale organic farming can no longer claim that shortages of fossil fuel feedstocks will force a return to pre-industrial agriculture.

Another casualty of energy abundance is the new urbanism. Because cars and trucks and buses can run on natural gas as well as gasoline and diesel fuel, the proposition that peak oil will soon force people around the world to abandon automobile-centered suburbs and office parks for dense downtowns connected by light rail and inter-city trains can no longer be taken seriously. Deprived of the arguments from depletion, national security and global warming, the campaign to increase urban density and mass transit rests on nothing but a personal taste for expensive downtown living, a taste which the suburban working-class majorities in most developed nations manifestly do not share.

Eventually civilization may well run out of natural gas and other fossil fuels that are recoverable at a reasonable cost, and may be forced to switch permanently to other sources of energy. These are more likely to be nuclear fission or nuclear fusion than solar or wind power, which will be as weak, diffuse and intermittent a thousand years from now as they are today. But that is a problem for the inhabitants of the world of 2500 or 3000 A.D.

In the meantime, it appears that the prophets of an age of renewable energy following Peak Oil got things backwards. We may be living in the era of Peak Renewables, which will be followed by a very long Age of Fossil Fuels that has only just begun.