Poor people don't pay enough, while corporations and the rest of us pay too much. No, no, and no 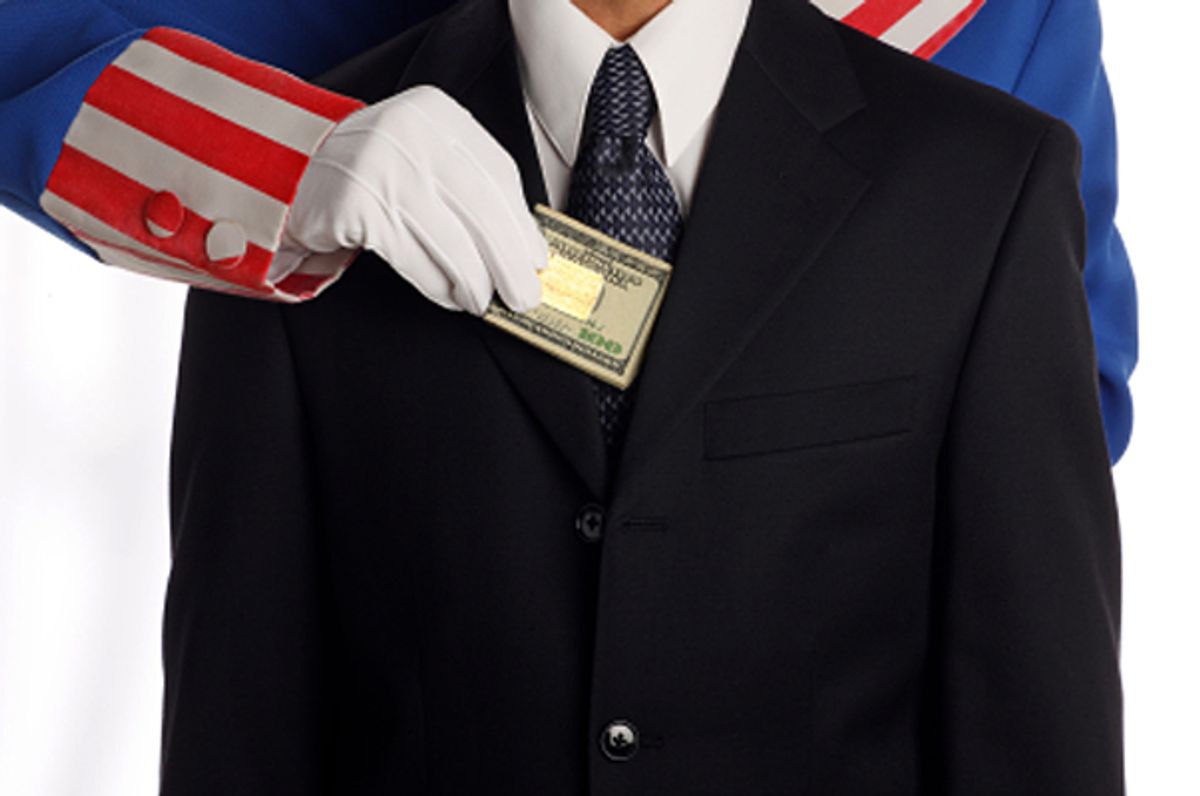 Example: From The Center on Budget and Policy Priorities:

At a hearing last month, Senator Charles Grassley said, "According to the Joint Committee on Taxation, 49 percent of households are paying 100 percent of taxes coming in to the federal government." At the same hearing, Cato Institute Senior Fellow Alan Reynolds asserted, "Poor people don't pay taxes in this country." Last April, referring to a Tax Policy Center estimate of households with no federal income tax liability in 2009, Fox Business host Stuart Varney said on Fox and Friends, "Yes, 47 percent of households pay not a single dime in taxes."

The Center on Budget and Policy Priorities' Chuck Marr and Brian Highsmith provide the definitive takedown of this myth.

But that does not mean that these households pay no federal taxes at all. Far from it: Nearly all working Americans pay payroll taxes to fund Medicare and Social Security. In 2007, the poorest Americans -- taxpayers in the bottom fifth of income -- paid 8.8 percent of their income as payroll taxes. The next fifth paid almost ten percent. The top 20 percent of earners paid only 5.7 percent.

And of course, these numbers don't include state and local taxes or excise fees like gas taxes, which tend to have a regressive impact that hits poorer Americans harder. Bottom line: only 14 percent of Americans don't pay either federal income taxes or payroll taxes -- and that group is made up primarily of "low-income people who are elderly, unable to work due to a serious disability, or students."

What all this means is that in the late 1980s, the U.S. was nearly the lowest taxed nation in the world, and a quarter century later we're nearly the highest.

Totally untrue. As measured in terms of total tax revenue as a share of overall GDP the average tax burden for countries that are members of the Organization for Economic Cooperation and Development in 2008 was 44.8 percent. The U.S. -- 26.1 percent. The U.S. pays less taxes, as a share of GDP, than Denmark, Sweden, Italy, Austria, France, Netherlands, Germany, United Kingdom, Canada, Spain, Switzerland and Japan.

Furthermore, as Bruce Bartlett explains in detail in The New York Times the current U.S. federal tax burden, measured, again, as a share of GDP, is only 14.8 percent -- a 60-year low.

We have the highest corporate tax rate, or one of them, in the OECD nations.

Actually, as measured in terms of share of GDP, the U.S. has the lowest corporate tax burden of any OECD nation. While the official tax bracket may seems high -- 35 percent -- if one takes into account various loopholes and tax dodges, the effective tax rate is considerably lower, or around 27 percent, which comes in as slightly higher than average for OECD members. And according to ace tax report David Cay Johnston, the bigger you are, the less you pay -- the effective tax rate for the biggest U.S. corporations is only about 15 percent.

There you have it, for future handy reference. Poor people do pay taxes, the biggest corporations don't pay enough, and the United States, as a whole, has a low tax burden overall.