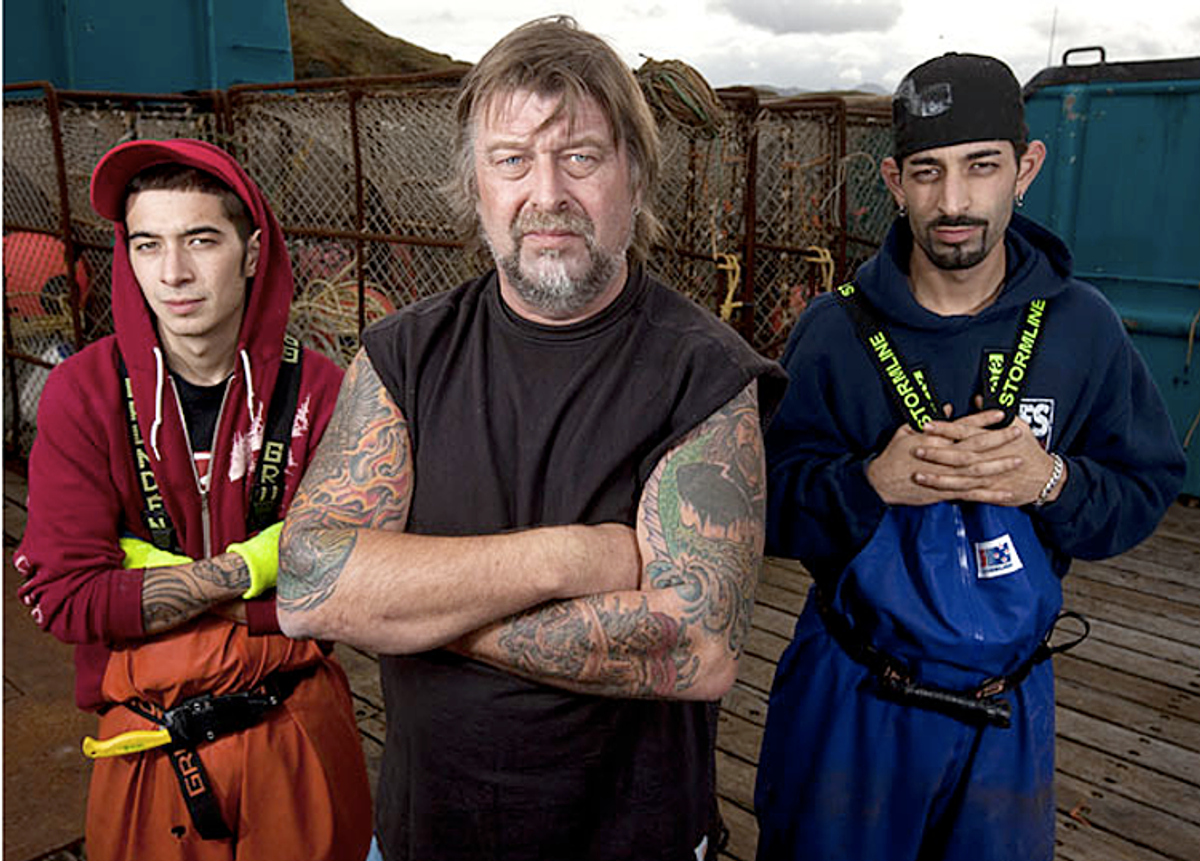 "Deadliest Catch" was already a great series about the physical and psychological consequences of work. But this season it has become something else, too: a fair-minded portrait of addiction, and an admission that work itself might encourage it.

At the end of last week's episode, one of the show's competing fishing vessels, the Cornelia Marie, pulled into the dock after a disappointing season; Jake Harris, a deckhand and ship co-owner who'd struggled with drug addiction for years, fled to escape a drug test ordered by his captain, then took a taxi to the nearest airport and hopped the first flight out. In last night's episode, a skipper on another fishing vessel, the Northwestern, got an apologetic phone call from a recovering deckhand who'd stayed clean for most of the season, then suffered a relapse and got sent packing.

You could interpret these scenes and others in moralistic terms, and certain overheard lines would seem to confirm that view. "Sounds like a typical addict who's coming out of relapse," said Edgar Hansen, an ex-addict and deck boss on the Northwestern, after taking a apologetic phone call from the deckhand who'd relapsed at sea. "Pretty straightforward. Guilt. Shame. Low dignity. Remorse. That's what he sounds like: Lost."

But one of this show's many fine qualities is its refusal to take addicts and their problems out of context and treat them simply as criminals, troublemakers or human wreckage.

If you watch "Deadliest Catch" week in and week out, you're not shocked by revelations that this or that crewman is addicted to pills or is a pothead or an alcoholic. Instead, you look at these fishermen's lives and marvel that there aren't more addicts on these boats -- more than the camera manages to catch, anyway.

Crab boat captains work their crew the way pharaohs worked slaves. Everyone involved just accepts it as the price of earning a living.  And while illegal drugs are frowned upon, legal drugs are readily available to anyone who suffers a debilitating injury on deck. In last week's episode, a deckhand with an injured foot asked his rookie skipper, Elliott Neese, "Can you shoot me up with some Cortisone?" "I can shoot you up with Cortisone, morphine, whatever the f--- you need," Neese replied.

The company healthcare plans consist of whatever first aid happens to be available, plus the promise of helicopter evacuation for anyone suffering a heart attack, stroke, or other potentially fatal misfortune. Last season, a fisherman who accidentally cut his hand during a routine task was soon branded deadweight by his colleagues and forced to go home. The deckhand asking for the cortisone shot in last week's episode was later shown laughing through tears while pressing a pack of frozen lunchmeat against his sole. The Cornelia Marie's previous captain, Phil Harris, suffered a stroke on the bridge last season and died in a hospital bed days later; his shadow looms over his sons, Josh and Jake. The still-fresh memory of Phil's demise surely isn't helping Jake stay clean; ditto the debt he and his brother took on after their dad passed.

Last week and this week confirmed that life on a crab boat turns men into warm-blooded machines, and that if a worker stops being productive for any reason, his boss and coworkers will offer him a few words of sympathy, then immediately commence grumbling that he's damaged goods, is no longer pulling his weight, and should pack it in for the sake of the majority.

The crew on these boats derive their pay from the size of each season's haul, which means there's no incentive for either bosses or employees to enforce humane workplace practices. These men routinely toil for twenty-plus hours at a stretch, pausing just long enough to scarf down a meal or relieve themselves. If they're lucky, they get a few hours to nap before returning to the grind, and if they're not lucky, they end up as participants in a kind of iron man contest, seeing how long they can work without keeling over  from exhaustion or making a catastrophic mistake.  (Last night's episode casually revealed that the crew of the Ramblin' Rose worked 32 hours straight, and went without food for 20.)

Almost no one on these boats dares bitch or moan. Why? It's only partly a mindset thing. The job attracts stoics who detest whining.

But economic imperatives also come into play. The industry is structured like a cross between an agricultural collective and a waterborne sweatshop. The crewmembers make most of their yearly nut between October and January, often within the span of a few weeks, and are so exhausted afterward that it could be weeks or months before they're able to do comparably physical work. Time truly is money. Anyone who pauses for longer than a few minutes for any reason is instantly suspected of being a slacker who's going to shrink both the season's haul and the size of each man's share. (Not that any of these guys are making a king's ransom. According to figures at the end of last night's show, the average haul is somewhere between $30-$60K, which isn't much once you subtract taxes and Social Security.)

The more you watch this show, the more it ceases to seem a mere portrait of a way of life, and the more it starts to play like a metaphor for life in the so-called New Economy.

And isn't it interesting that the New Economy looks suspiciously like the economy of the pre-unionized industrial era, when a huge share of the citizenry worked grueling and sometimes physically dangerous jobs on farms and in factories for pathetically low wages, knowing full well that anyone who complained would be docked, suspended, fired, blacklisted, or murdered in a "workplace accident"?

"In a place where careers are built on pain and suffering," said the narrator last night, "every man has a limited shelf life." Bingo.

The episode's parting exchange was even more chilling. Edgar Hansen, the deck boss of the Northwestern, told his skipper and brother, Sig Hansen, that he planned to retire after this season because he had nothing to prove anymore, and because he was aging and tired and wanted to see more of his family.

A visibly disgusted Sig accused his brother of playing "the home card."

"You're gonna die in that chair," Edgar replied.