What should we make of the pizza magnate's surge in Republican presidential polls? 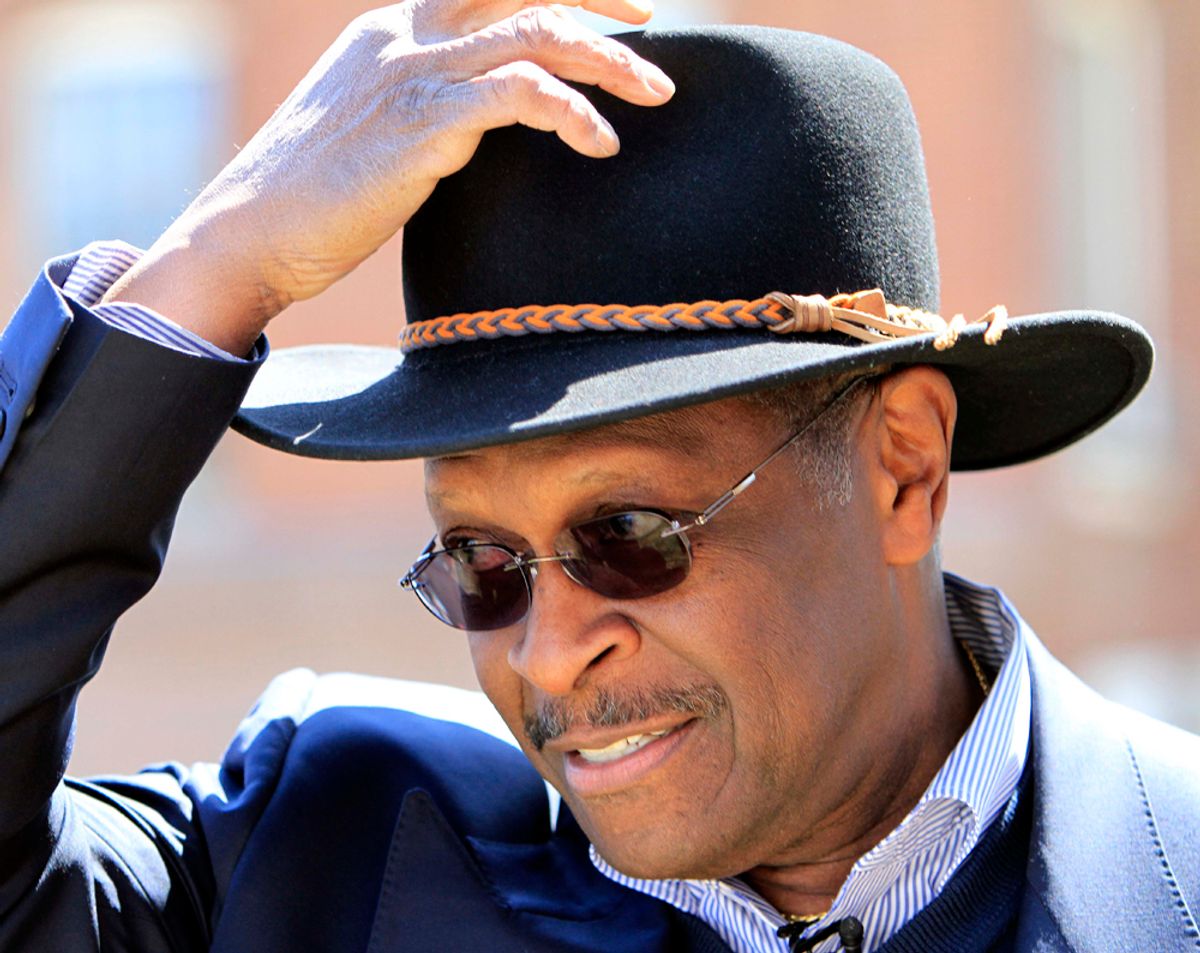 If you haven't noticed yet, a new candidate is rapidly climbing in Republican presidential polling. Last week, Herman Cain broke into double digits in a CNN poll of national GOP voters, and now a new PPP poll from the first-in-the-nation caucus state of Iowa find him tied for second place there with Sarah Palin, just six points behind Mitt Romney.

This raises an obvious question: How the [bleep] is this happening?

Cain, after all, came to the race with essentially no name recognition and only one failed, low-profile political campaign -- a bid for the Republican Senate nomination in Georgia in 2004 that he lost by 26 points -- under his belt. And while he does boast a fairly impressive business resume -- the CEO of Godfather's Pizza, a restaurant chain with about 500 franchises in the U.S., from 1986 to 2002 -- it's not as if he enjoys widespread acclaim as a corporate titan. And yet, he's become a genuine sensation among politically engaged Republicans these past few weeks.

What's striking about Cain's rise is that we've seen candidacies like his before in the modern era, but they've never gained this kind of polling traction. In a way, he's a hybrid of two fringe candidates who sought the 1996 Republican nomination: Morry Taylor (because of their under-the-radar business backgrounds -- Taylor was the CEO of an Illinois tire company) and Alan Keyes (because of their political backgrounds -- Keyes had two losing (by wide margins) Senate campaigns in Maryland to his name). By spending $6 million of his own money, Taylor was able to buy himself some mainstream exposure; he was invited to most debates, advertised heavily on television, and received his share of newspaper and magazine profiles. Keyes had little money, but his powerful oratory and staunchly conservative social message attracted a cult following and also led to some news coverage and debate invitations (although there were occasions when he was not accorded this respect).

But neither Taylor nor Keyes ever made noise in national or early state polling. Keyes managed to grab 7 percent in the Iowa caucuses and 2 percent in New Hampshire. Taylor finished with well under 5 percent in both states. Four years later, Keyes ran again and did slightly better, finishing with 14 percent in Iowa -- a deceptively high total since John McCain had abandoned the state, leaving just George W. Bush, Steve Forbes, Keyes and Gary Bauer to divvy up the Iowa electorate.

That Cain could rise so high in the polls so early in the process certainly speaks to the weakness of the current GOP field, and also to the unique appeal of his own story and message to Obama era Republicans (as Alex Pareene explained yesterday). But it also illustrates how significantly the online world and cable news has changed presidential politics.

When Taylor and Keyes set out to run in 1996, there was no such thing as Fox News -- just CNN, whose daily political content was limited to "Inside Politics" in the middle of the afternoon, "Crossfire" in early primetime and maybe "Larry King Live" (if no aging 1950s Hollywood stars were scheduled instead). There was some room in this mix to spotlight candidates like Taylor and Keyes, but not that much. And when it came to the major broadcast networks, you could forget it. Meanwhile, the online world was in its infancy. Libertarians had already formed a fairly active and vibrant community on Prodigy and CompuServe bulletin boards, but when it came to political communication, the internet was a novelty. The main tool of communication for politically engaged conservatives was probably talk radio, which also created problems for Keyes, Taylor and their ilk. Rush Limbaugh was not going to waste much time talking about someone his listeners never got to see or hear or talk about anywhere else. If we were still living in the world of 1995, it's hard to believe we'd be watching Herman Cain make the same dramatic polling charge we're now witnessing.

It's infinitely easier for someone who would have previously been deemed a fringe candidate to gain exposure (and the credibility that comes with it) today. In Fox News, Republicans have found a cable news home. Unlike CNN 15 years ago, Fox needs a deep supply of Republican characters to keep its audience happy, so there's plenty of room for Herman Cain, and many others. Well-established blogs and conservative news sites can introduce and popularize new Republican faces and ideas overnight. Back in 1995, Keyes delivered countless speeches that mesmerized rooms with a few dozen Republican voters in them. If he was lucky, the speech would be televised by C-Span, bringing his message to a slightly wider world of conservatives. And once audiences watched the speech, that was it. There was no follow-up appearances on  "Hannity" or "Fox and Friends," no uploading it to YouTube for others to see, no Googling Keyes' name and finding a trove of other speeches, videos and television appearances. In a world of viral videos and 24-hour cable news, the Alan Keyes of 1995 might have made the early charge we're now seeing from Cain.

Granted, the rise of Fox News and the online world hardly means that anyone can emerge as the next Republican presidential star. Buddy Roemer and Fred Karger both have websites (at least I assume they do) and have probably tried to use Twitter, Facebook and YouTube -- and what do they have to show for it? To break through in this world, an outsider candidate still needs to have something unique and compelling to sell; but if he or she does, it's a lot easier to go mainstream today.

Does this mean that Cain has a real shot to win the nomination? I still doubt it. So far, he's had it easy -- there's been no real effort from his opponents or from Republican leaders to check him. But if he sustains and builds on this level of support, there will be. Given his extremely thin resume and the fact that, as Jonathan Chait put it, "he can't even bluff his way through basic questions," most of the GOP's opinion-shaping elites probably don't want him coming anywhere near their nomination. For now, though, they're probably happy to let him have his moment.