An immigrant designer talks about the inspiration for her work and why she no longer feels welcome in the U.S. 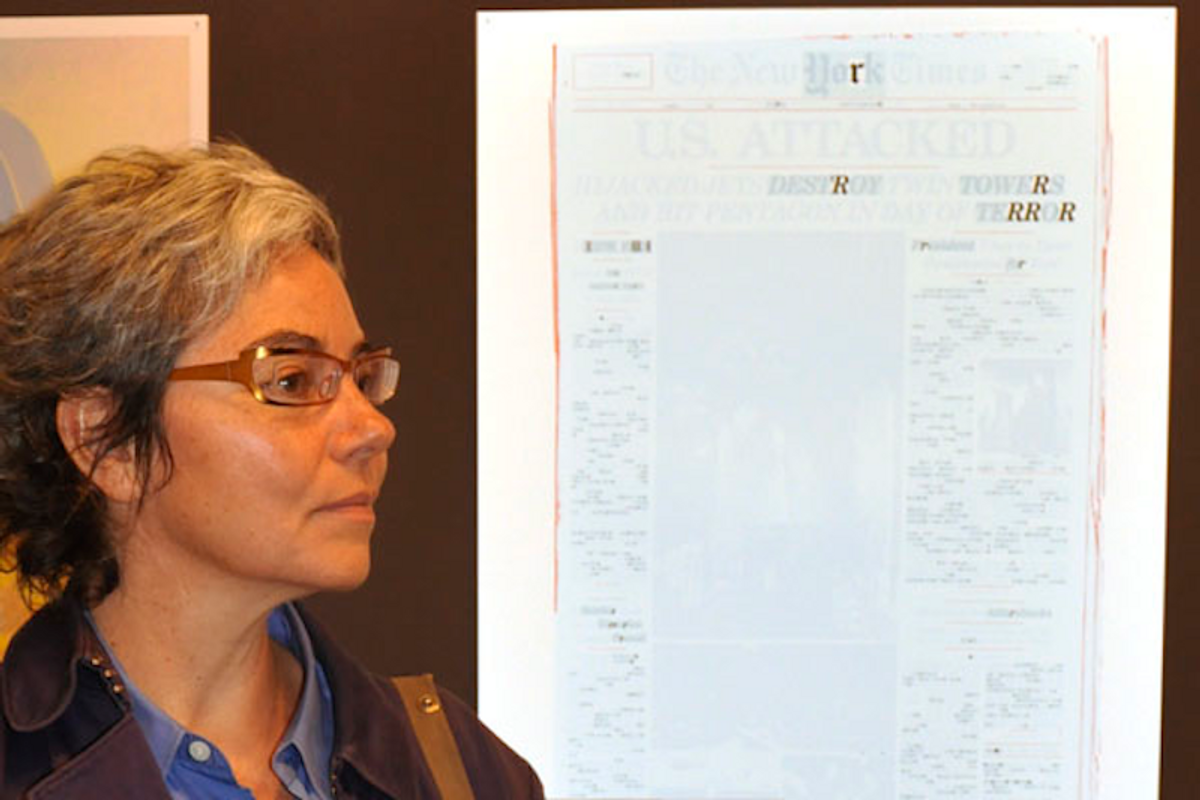 The letter "R." There's the capital, erect with the stately nobility of an opera diva. And there's the lower case: diminutive, downcast, dejected. That's the letter Rebeca Méndez tackled as one of the 26 contributors to "Getting Upper: Graphic Designers and Artists Reconsider the Alphabet." The show debuted last week at the Pasadena Museum of California Art.

Two other shows also opened in conjunction. Two- and three-dimensional paintings by the Clayton Brothers consumed the museum's main space. And "Graffiti Art: from Concrete to Canvas" takes up a few rooms at the far end.

"Graffiti Art" is making its appearance a few weeks after "Art in the Streets," a major survey of various forms of urban art that filled the L.A. MOCA's enormous Geffen Contemporary exhibition space. But rather than a nationwide historical overview, PMCA's more modest show highlights local, contemporary talents, some of whom their cues from revolutionary Mexican muralists such as Diego Rivera and David Alfaro Siqueiros. The show is sectioned thematically, with groupings such as Representation, Letter-Based Formalism, and perhaps most interesting for designers, Graphics-Based works, which draw from posters and street signage as well as painting.

And now back to the "... Alphabet, Reconsidered" project. It's curated by Amos Klausner and set up in the "Project Room" annex near the museum's entrance. Most of the prints are formal analyses of letterforms, and their graphic approaches, such as optical illusions, are often readily apparent from a distance.

Others were more driven by concept and content. Rebeca's, specifically, rewards close contemplation. As you approach it you notice ghostly, barely discernible photographic images surrounded by swarms of growling, vicious "R"s. Aha! It's a New York Times front page that's been drastically altered. And its titled "_ _ R R _ R."

Rebeca Méndez is both a designer and a fine artist. Her work in both arenas has been praised and admired for the past two decades, particularly for its visceral, challenging, and yes, sensual appeal. And much of it is often left open to multiple interpretations.

In our interview following the opening, Rebeca shared her thoughts and feelings about her PMCA piece and her presentation at an L.A. TEDx Conference in a few weeks.

After the interview you'll find photos from the opening night reception. All three shows will run until Sept. 4.

Dooley: How do you separate your art from your design jobs?

Méndez: I consider the design and art disciplines clearly distinct from each other in multiple ways. And I don't confuse them. Although they may share certain processes and visual languages, each one has its own culture and discourse. A work of art has its origin in one's own inquiry, whereas a design project, for the most part, responds to a client's needs.

When I design an exhibition catalog for MOCA, create a brand for a nonprofit organization, or design an LP for a composer, it is clearly a design project. When I generate my own projects or receive public art commissions with no limitations other than location, schedule, and budget, and I generate my own content, I consider it a work of art.

I approached the project as a work of art. An artwork that could stand alone and generate meaning, as well as be part of a collection. I selected the letter "R" and resolved it conceptually, rather than formally.

How did the piece evolve?

I was in New York when 9/11 happened. And very soon after, I was involved with the artist-led group who put out the message "Our Grief Is Not a Cry for War." I collected the newspapers of the weeks following 9/11, as well as fliers and bits and pieces of burned documents.

I decided to use the front page of the New York Times of 9/12/2001 and isolate the words containing the letter "R" and highlight the letter, because it was clear to me that our usage of the letter shifted after that date.

It was inevitable, noticing the words that began to dominate all media ... towers, terror, terrorists, horror, war, grief, cry. The reverberation of the "R" has not left the media since then. It has gotten worse, as partisan politicians and media sensationalism bank on the incessant repetition of the sound bite.

2011 marks the 10th anniversary of the attack, and I thought that it would be timely. But when, on May 1, 2011, Osama bin Laden was killed, for many people it marked a closure. From that "closure" point of view, one may be able to see my "_ _ R R _ R" and question -- and maybe purge -- the terror they have allowed to linger within them.

What would be an example of how usage and reverberations of language have affected you personally?

It never has been favorable to be Mexican in this country. But in the last few years, the words immigrant and Mexican -- I am both -- have become dirty words. There was one extremely ignorant "account executive" of a large corporation ... I'm sure she held an MBA. In questioning my place of birth, she insisted that she could not call me Mexican as she felt she was insulting me.

This profound ignorance, magnified by irresponsible and special interest media platforms, are dominating the conversation. I no longer feel welcomed in this country. So, it has heightened my activism.

I design primarily for nonprofit organizations or cultural institutions. I lecture on "design as a social force." And as an artist, I cross all boundaries. I travel to extreme places such as Iceland, Patagonia, Svalbard and the Sahara, where I am awakened to a heightened level of perception. I consider the journey as a medium in itself, and "migration" is essential to my work.

Speaking of migration, how were you selected for your upcoming Arctic talk at next month's TEDxUCLA?

Scott Hutchinson, who organized the series, knows me and has followed my work for many years. The TED talks are about a compelling story. The high Arctic expedition I participated in in October of last year, aboard a 100-year-old, ice class sailboat in the international territory of Svalbard is a good story. I created several artworks during the expedition, and the seeds of a new artwork called "Circumpolar" were planted.

"Circumpolar" is a long-term project, where my husband, Adam Eeuwens, and I will follow the arctic tern, a small sea bird that flies from the Arctic to the Antarctic and back again every year, always chasing the summer, which makes it the one living creature on the earth that sees the most daytime light in its lifetime. Migration is at the core of this new work.

Both your Alphabet and Circumpolar projects seem to approach issues of communication, and transformation, each in a very different way.

I think I agree with you. Tagging is a way of marking your territory and thus confirming your presence. Urszula Dawkins, curator of "Cold Edge: The Arctic Circle" exhibition in Melbourne, describes the high Arctic landscape where "the quest for 'place' is blasted away in horizontal snow-drifts."

During the Arctic expedition I captured landscapes with my 16mm Bolex film camera to complete an artwork called "Nothing Further Happens," with focus in alluding to the non-demonstrable. All you need to experience is a few seconds of the minus-30, minus-40 degrees Centigrade winds on your face and hands to realize that in the high Arctic, nothing out there wants you to live. There is no place.

I am interested in what philosopher Edmund Burke investigated in his 1757 book "A Philosophical Enquiry into the Origins of Our Ideas of the Sublime and the Beautiful." He focused on "what happens to the self when assailed by that which seems to endanger its survival" and moved the discourse around the sublime, away from the sublime object and towards the experience of the beholder, which, he argued, had the power to transform the self.

UCLAx typography instructor Andrew Kutchera in a race with red "W" by Emilio Venegas and Slanguage. Photo by Joan Dooley.

Keedy and Aono decide on pancakes with bacon and French toast with bacon at the "Lardon Food Truck parking lot after-party." Photo by Michael Dooley.