Natural gas is cheap and clean, but hardly the answer to our energy needs. It just buys us time 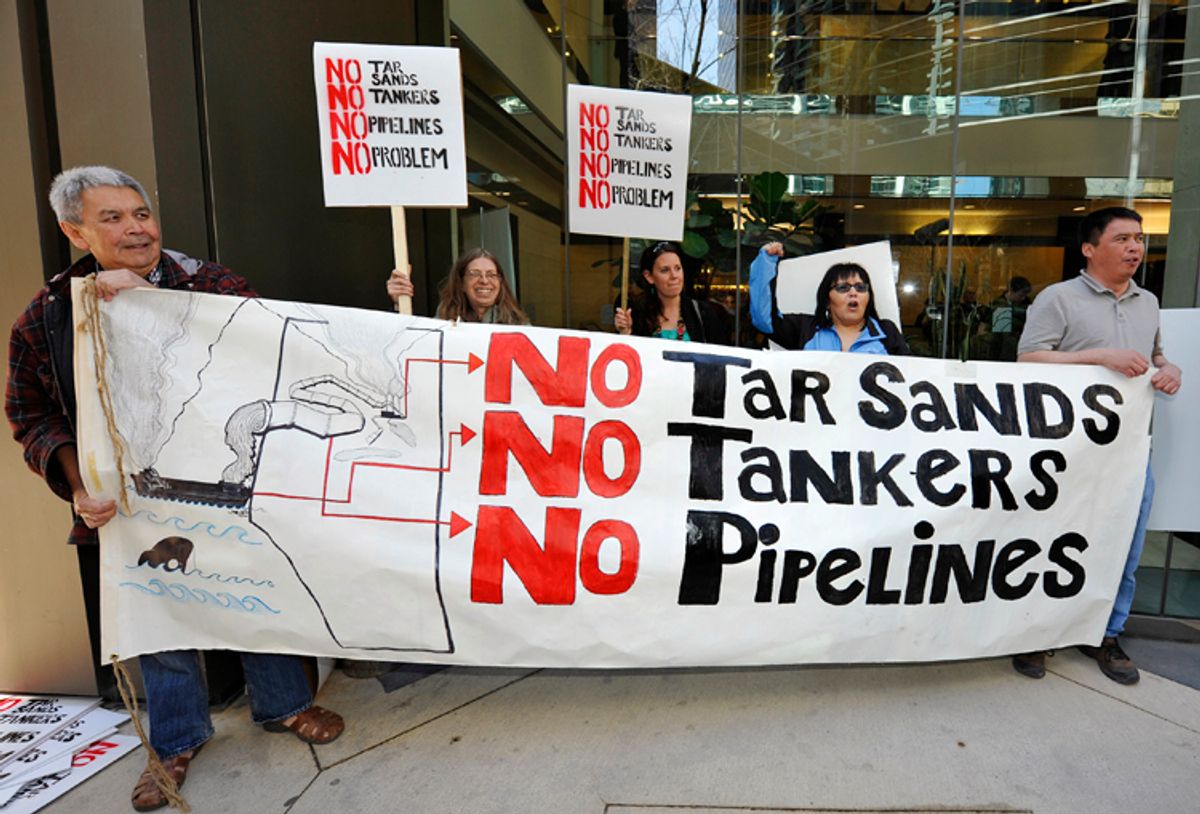 First nations natives from British Columbia protest in front of the headquarters of Enbridge before the company's annual general meeting in Calgary, Alberta, May 11, 2011. The natives are protesting an oil pipeline that will go through their land. REUTERS/Todd Korol (CANADA - Tags: BUSINESS ENERGY CIVIL UNREST) (Â© Todd Korol / Reuters)
--

If Michael Lind's intention, in his Salon article published Tuesday, "Everything You've Heard About Fossil Fuels May Be Wrong," was to throw so many bombs at once that critics would be too buried by shrapnel to respond, then he at least partially succeeded. It's hard to know where to start grappling with a column that simultaneously dismisses the challenge of global warming, declares a new golden age of fossil fuels that could last millennia, ridicules renewable energy technologies such as wind and solar while advocating a massive nuclear power buildup, and even throws in a few digs at city living and organic agriculture, just for fun. Readers who might more logically expect to see such sentiments espoused in the National Review or the American Spectator than in Salon were unsurprisingly annoyed.

The article is built on two parallel assertions. First, new technologies have unlocked vast quantities of natural gas (and will deliver a lot more oil, as well, to take care of all our energy needs into the distant future, and second, catastrophic climate change is a "low probability" event that we don't need to worry about. Let's start with the second claim, because how we think about climate change drastically affects how we think about fossil fuels.

The scenarios with the most catastrophic outcomes of global warming are low probability outcomes -- a fact that explains why the world's governments in practice treat reducing CO2 emissions as a low priority, despite paying lip service to it.

A better explanation for why the world is treating climate change as a low priority problem might be because the U.S. -- historically the largest producer of greenhouse gas emissions -- has refused to take any action at all. And that, in turn, is a direct result of fierce opposition from the fossil fuel energy industry and other entrenched special interests, as well as the decision of one major political party to utterly reject the conclusions of the scientific mainstream. (A willful display of ignorance unmatched by any other major political party or ruling government in the rest of the world. )

But whatever the true reasons for our failure to act, Lind's timing can't be beat, because on the very day his article appeared, the International Energy Agency revealed that "greenhouse gas emissions increased by a record amount" in 2010.

The shock rise means the goal of preventing a temperature rise of more than 2 degrees Celsius -- which scientists say is the threshold for potentially "dangerous climate change" -- is likely to be just "a nice Utopia," according to Fatih Birol, chief economist of the IEA. It also shows the most serious global recession for 80 years has had only a minimal effect on emissions, contrary to some predictions.

Last year, a record 30.6 gigatons of carbon dioxide poured into the atmosphere, mainly from burning fossil fuel -- a rise of 1.6Gt on 2009, according to estimates from the IEA regarded as the gold standard for emissions data...

"Such warming would disrupt the lives and livelihoods of hundreds of millions of people across the planet, " [said Professor Lord David Stern, author of the Stern Report on the economics of climate change], "leading to widespread mass migration and conflict. That is a risk any sane person would seek to drastically reduce."

I'm not sure what definition of catastrophe Lind is using, but the unprecedented frequency of extreme weather events that we are already witnessing all across our planet is a strong indicator that global warming is already contributing to serious disruptions. If you accept the science of climate change, then the fact that we are pumping record amounts of greenhouse gas emissions into the atmosphere is not a good thing.

Which brings us to the main thrust of Lind's piece, his celebration of how hydraulic fracturing technologies -- or "fracking" -- have allowed energy companies to tap huge amounts of natural gas.

And sure, there are reasons environmentalists should be happy about a dramatic rise in accessible natural gas supplies. Burning natural gas for heating or electricity generation releases much less carbon dioxide than other fossil fuels. If forced to choose between natural gas or coal as a source of electricity, any environmentalist would pick natural gas. This is no secret -- even as ardent a climate change activist as Climate Progress's Joseph Romm called fracking a potential "game changer" as long as two years ago.

But Lind is far too quick to dismiss the potential environmental problems associated with fracking. While there may not be a meaningful scientific consensus as to whether the fracking process results in significant greenhouse gas emissions, I defy anyone to read the New York Times' massive, exhaustively reported series on pollution problems associated with fracking and still not be concerned with threats to the nation's drinking water supply or the multiple failures of our regulatory system. There are clearly reasons to be concerned. Just this week, Texas -- Texas! -- passed a "fracking disclosure" law requiring oil or gas well operators who perform hydraulic fracturing "to disclose the volume of water and the chemical ingredients of the fracturing fluids used." Also this week, in New York, state Attorney General David Schneiderman announced he was suing the federal government for "failure to study 'fracking.'"

One can argue that we just don't have enough data to judge the full ecological imprint of fracking, but it seems premature to  wave away any potential negative externalities. And yet that kind of blithe dismissal seems to be a theme of Lind's treatment of other hydrocarbon technologies. He notes that "there is enough coal to produce energy for centuries" and touts "tight oil" -- the use of fracturing technologies to extract crude oil from old wells, along with oil sands, as encouraging sources of additional hydrocarbons. But generating energy from coal, "tight oil" or oil sands isn't "clean" by any definition. Lumping them in with natural gas makes no sense, since burning oil and coal will continue to exacerbate the greenhouse effect.

Oh well, if climate change really is a problem, argues Lind, then we'll just have to forget about all those hydrocarbons and engage in a massive nuclear power buildup.

If runaway global warming were a clear and present danger rather than a low probability, then the problems of nuclear waste disposal and occasional local disasters would be minor compared to the benefits to the climate of switching from coal to nuclear power.

It's tempting to say let's ask the residents of Fukushima what they might think of this thesis, but that's too easy. The more pertinent question to mull is why, if the economics of nuclear power make sense, private industry can't seem to make a go of it. The free market isn't very friendly to nuclear power -- it is most widely implemented, today, in countries where there is a strong state presence in the industry, like France or China. Building enough nuclear power plants to make a dent in climate change will be massively expensive. And if we're going to subsidize new sources of energy why not funnel that government funding toward sectors that do not have waste or potential meltdown issues -- like wind and solar.

The thrust of Lind's piece is that we have nothing to worry about. But that's the wrong moral to take from the surprising surge of accessible natural gas. If the environmental problems associated with fracking can be managed, then the fact that natural gas is cheap and relatively clean should definitely be celebrated. But not because it signals some illusory new golden age of fossil fuels, but rather because it gives us more breathing room than we thought we had to get our act together and find ways to limit the vast -- and increasing -- amounts of fossil-fuel derived greenhouse gas emissions that are currently getting pumped into the atmosphere.