Investigators said they have received estimates of 10,000-15,000 people killed since February 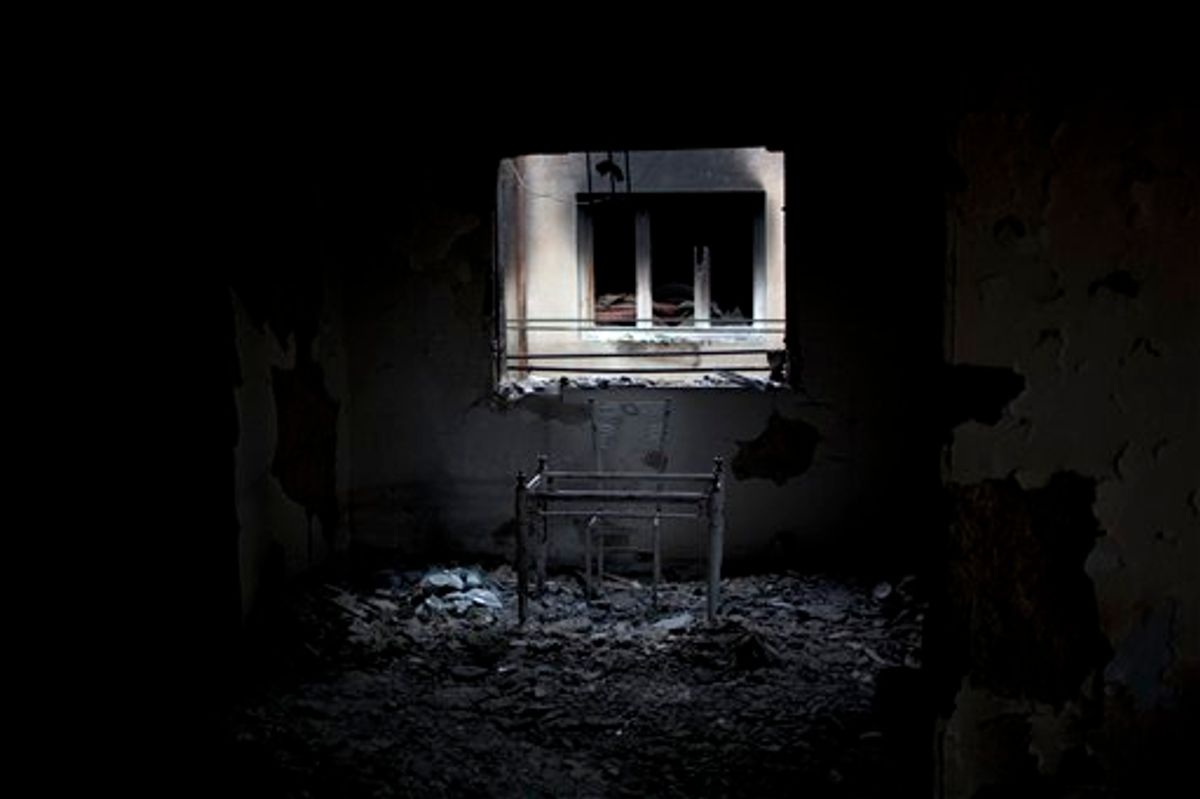 In this photo taken Tuesday, May 24 , 2011, a table and a chair are seen in an apartment used by snipers loyal to Libyan-leader Moammar Gadhafi and destroyed during fighting with rebels for the control of Tripoli Street, Misrata, Libya. Since the weeks-long siege of the city ended in mid-May, Misrata residents make pilgrimages to Tripoli Street, site of the fiercest fighting in the battle for Libya between the rebels and Moammar Gadhafi's forces. People gawk at the wreckage of bombed-out buildings with gaping holes and walls pocked by bullets, and shoot photos of charred hulks of tanks, rubble-strewn streets and a side walk museum featuring drumloads of bullet casings, uniforms of dead enemies, and unexploded munitions. (AP Photo/Rodrigo Abd) (AP)
--

A United Nations panel said Wednesday that Libyan government forces have committed crimes against humanity and war crimes, apparently as a result of orders given by Moammar Gadhafi and other senior officials.

The U.N. investigators said they have received estimates of 10,000-15,000 people killed since February and added there is evidence that opposition forces also committed "some acts which would constitute war crimes."

The three-member panel based its finds on interviews with 350 people in government and rebel-held parts of Libya, as well as in refugee camps in neighboring countries.

It concluded that government forces committed murder, torture and sexual abuses "as part of a widespread or systematic attack against a civilian population" before and during the conflict that started in February.

"Such acts fall within the meaning of 'crimes against humanity,'" the panel said.

"The consistent pattern of violations identified creates an inference that they were carried out as a result of policy decisions by Col. Gadhafi and members of his inner circle," it said.

The panel's 92-page report, commissioned in February by the U.N. Human Rights Council, also found that rebel forces committed "some acts which would constitute war crimes."

"The commission is not of the view that the violations committed by the opposition armed forces were part of any 'widespread or systematic attack' against a civilian population such as to amount to crimes against humanity," it added.

The panel was led by Cherif Bassiouni, a professor of law at DePaul University in Chicago. Bassiouni, an Egyptian, was assisted by Jordanian jurist Asma Khader, and Canadian Philippe Kirsch, a former judge at the International Criminal Court.

That court's prosecutor, Luis Moreno-Campo, has previously said he has "strong evidence" of crimes against humanity committed by Gadhafi's regime.

Last month, Moreno-Campo asked judges to issue arrest warrants for Gadhafi, his son Seif al-Islam Gadhafi and intelligence chief Abdullah al-Sanoussi, accusing them of committing crimes against humanity by targeting civilians in a crackdown against rebels.

The U.N. experts called on both sides to conduct transparent and exhaustive investigations and bring those responsible for abuses to justice.