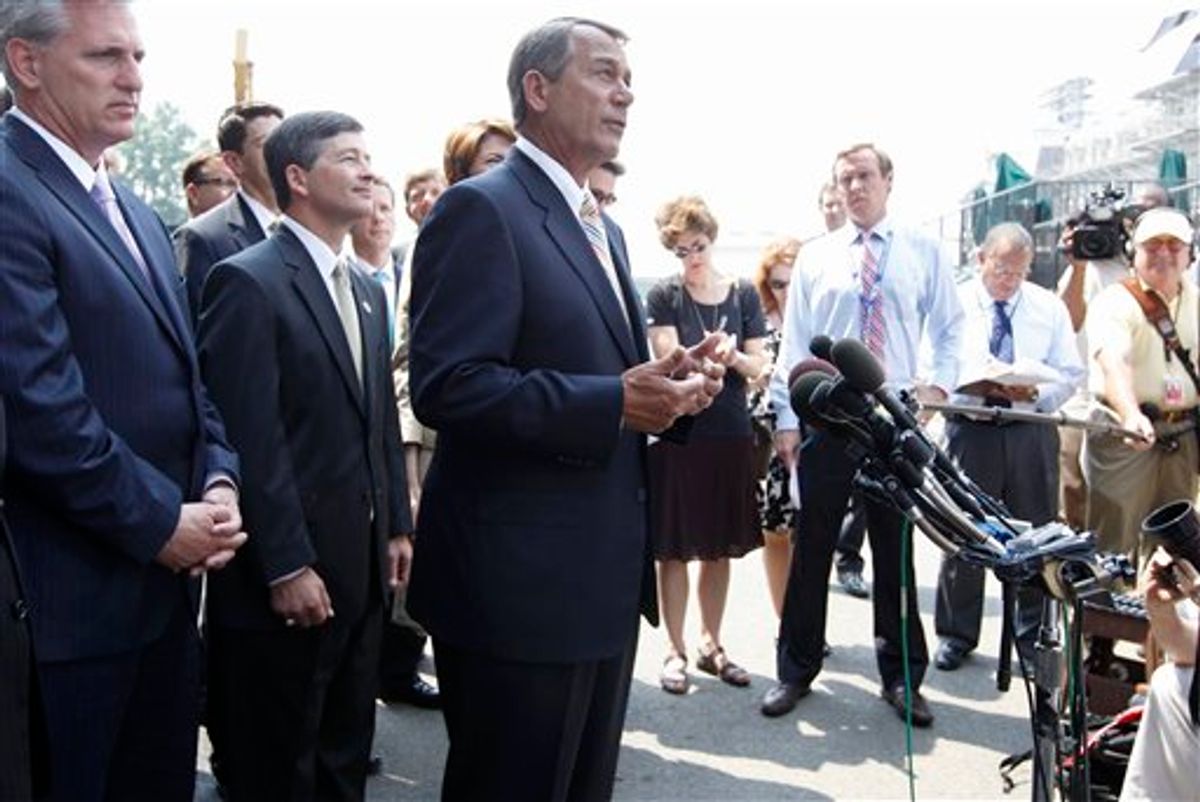 Top House Republicans pressed President Barack Obama Wednesday for a detailed plan on budget cuts, and one leading lawmaker accused him of distorting a GOP Medicare proposal at the center of the partisan divide over spending.

White House press secretary Jay Carney said the meeting was productive despite the absence of any signs of progress. He also made clear that Obama has no intention of letting up on his assertions that Rep. Paul Ryan's plan to send future Medicare recipients into the private insurance marketplace will "end Medicare as we know it."

"He doesn't believe that we need to end Medicare as we know it," Carney said at a White House briefing, about an hour after the East Room meeting between Obama and House Republicans.

The White House session came as the GOP sought to build pressure on Obama for trillions in spending cuts in exchange for any increase in the government's ability to borrow.

Afterward, dozens of rank-and-file GOP lawmakers streamed out of the front door of the White House and into a caravan of blue buses waiting for them on Pennsylvania Avenue, while members of the GOP leadership stopped on the driveway to speak to reporters and camera crews awaiting them in under a steaming sun.

"Any day Republicans and Democrats are actually having a dialogue, this is a good thing, said Republican Rep. Jeb Hensarling of Texas.

Yet it was hard to see any concrete progress from a meeting that, based on descriptions by both sides, amounted to a face-to-face recitation of each side's positions, but no breakthrough on how to reach a debt-reduction deal. The talks came as an Aug. 2 deadline approaches for the federal government to raise the debt limit or go into unprecedented default.

"Unfortunately what we did not hear from the president is a specific plan of his to deal with the debt crisis," Hensarling said. Instead, according to a GOP official briefed on the meeting, Obama noted that he's deputized Vice President Joe Biden to lead talks on deficit reduction.

"This is a large meeting and this is not the forum for specific advances in the negotiations. ... And yet it was productive," Carney said.

"I think it helps in that it allows everyone in the room to look each other in the eye."

House Speaker John Boehner, R-Ohio, said, "I told the president, one more time, this is the moment. This is the window of opportunity where we can deal with this on our terms. We can work together and solve this problem. We know what the problems are. Let's not kick the can down the road one more time."

According to a GOP official briefed on the meeting, Boehner and other leaders told Obama that he hadn't put a specific plan for spending cuts on the table. They brought up a speech he gave at George Washington University in April in which he called for deficit reduction totaling $4 trillion through spending cuts, tax increases and other measures. The Republicans said a speech isn't a plan.

Ryan, who heads the House Budget Committee., had attended the speech only to hear Obama excoriate his Medicare proposal. On Wednesday the Wisconsin congressman told the president he'd viewed that as a sign that Obama was thinking about the 2012 elections and wanted fellow Democrats to turn up the political heat, according to the GOP official.

The official, who spoke on condition of anonymity to discuss the private meeting, said Ryan told the president that leaders have to lead and Obama hadn't shown leadership.

Pressed on that after the meeting Ryan said: "I just said we got to take on this debt and if we demagogue each other at the leadership level then we're never gonna take on our debt."

Ryan said he explained his Medicare plan to the president to get him to stop mischaracterizing it. Obama and Democrats routinely label Ryan's proposal a "voucher" plan that would undo Medicare as it is now known.

"It's been misdescribed by the president and many others and so we simply described to him precisely what it is we've been proposing so that he hears from us how our proposal works so that in the future he won't mischaracterize it," Ryan said.

"The issue isn't what you call it," Carney countered later. "It is a voucher plan."

Republican officials said Boehner and other leaders all pressed Obama on Medicare, saying he had not put forward any plan to save it from going bankrupt. Boehner made the point early on that Medicare is on a path to bankruptcy. Carney said Obama has in fact sought savings from Medicare.

Ahead of Wednesday's meeting, Boehner released a statement signed by more than 150 economists backing his position on coupling spending cuts with any debt limit increase.

"Increasing the debt ceiling without significant spending cuts and budget reforms will send a message to American job creators that we still are not serious about ending Washington's spending addiction," the Ohio Republican said in the statement.

The session between Obama and House Republicans came on the heels of a symbolic and lopsided vote the day before against a GOP proposal to raise the cap on the debt limit by $2.4 trillion. The proposal, intended to prove that a bill to increase the borrowing cap with no spending cuts is dead on arrival, failed badly Tuesday on a 318-97 vote.

Democrats said the vote was aimed more at giving tea party-backed Republicans an opportunity to broadcast a "nay" vote against the administration's position that any increase in U.S. borrowing authority should be done as a stand-alone measure uncomplicated by difficult spending cuts to programs like Medicare. A more painful vote to raise the debt ceiling looms for Republicans this summer.

In fact, Biden is leading talks on reaching spending cuts alongside the debt measure in advance of the Aug. 2 deadline set by the Treasury Department.

If no action is taken by then, Treasury Secretary Tim Geithner has warned, the government could default on its obligations and risk turmoil that might plunge the nation into another recession or even an economic depression.

The government already has reached the limit of its borrowing authority, $14.3 trillion, and the Treasury is using a series of extraordinary maneuvers to meet financial obligations.

By no longer making investments in two big pension funds for federal workers and beginning to withdraw current investments, for example, the Treasury created $214 billion in additional borrowing headroom.