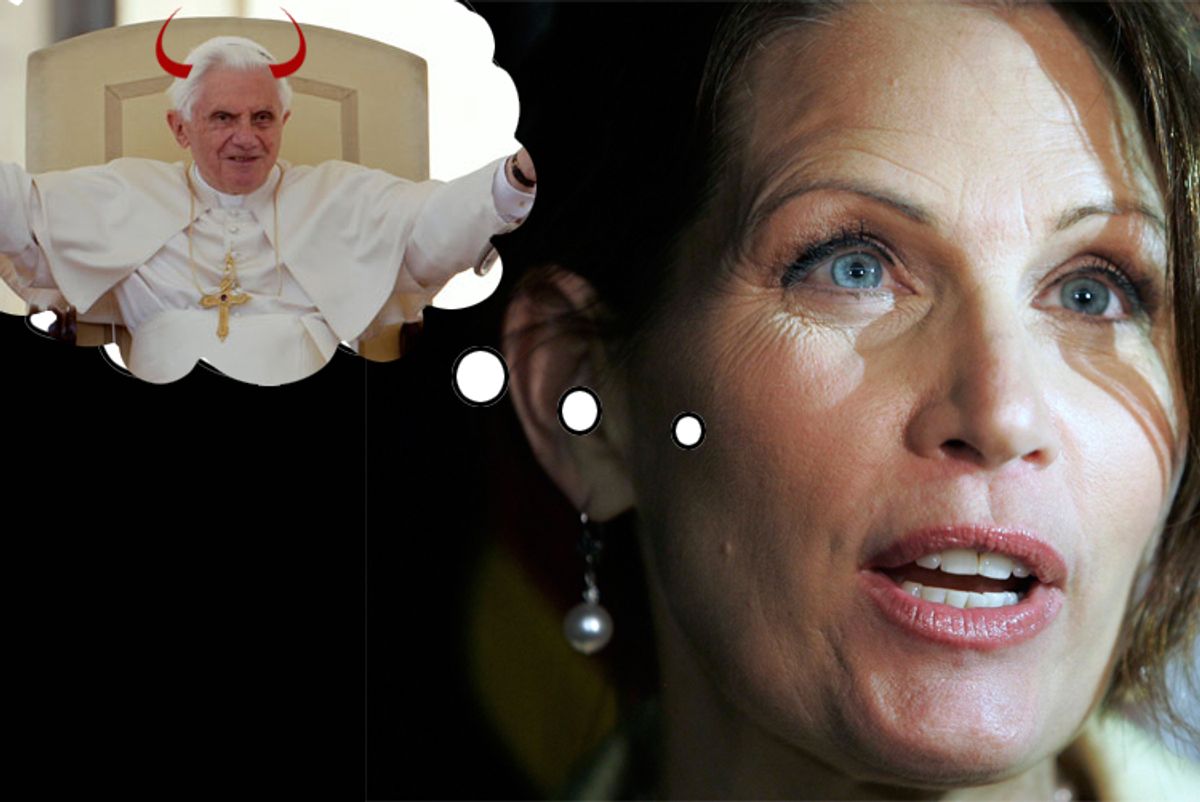 Olive Tree Ministries, based out of Maple Grove, Minn., produces a weekly radio show and a newsletter, and it is also obsessed with Israel because it believes we are living in the end times. Bachmann's been on Markell's radio show multiple times, attended an Olive Tree Ministries conference, and left a testimonial on its website. As MoJo says:

When Minneapolis' City Pages first reported [6] on Bachmann's relationship with Markell in 2005, the then-state senator denied any knowledge of Olive Tree Ministries. However, Markell tells Mother Jones that she's known Bachmann off and on for 35 years, and says she spoke about Israel at Bachmann's church in the late 1970s. "My hunch is that they misquoted her," Markell says. "She's been at my conference. Why she would have said [otherwise], I don't know."

And boy, according to Olive Tree Ministries, we live in very interesting times:

So Bachmann stands with Israel because she needs the Jews to rebuild the Temple in Jerusalem so that Christ can return, rapture the Christians up to Heaven, convince the Jews to worship him during the Tribulations, and then rule over the Earth from Israel for 1,000 years. (This is what these people believe, very, very literally.)

But wait! Before all that happens the antichrist needs to show up and convince everyone he's the Messiah! But who could that end up being? Some people say Obama, but Bachmann's church fingered a different suspect.

Before Bachmann was a Tea Party-affiliated Ron Paul fan obsessed with "liberty," remember, she was a traditional religious right fanatic with a degree from Oral Roberts University, who got into politics through antiabortion activism and who became famous for a school board run during which she and her allies supported teaching creationism in government-funded charter schools. (She is a home-schooling activist, which made a school board run kind of weird, but she was outraged at the idea of state standards forcing her to teach her children about anything other than Austrian economics and eschatology.)

When Bachmann was running for Congress in 2006, her official website bio said she was a member of the Salem Evangelical Lutheran Church of Stillwater, which belongs to the Wisconsin Evangelical Lutheran Synod. WELS is one of the very conservative "confessional" Lutheran denominations that maintains that the "antichrist" is the pope. You know, the leader of the Catholic Church? That pope. WELS confirms that they still "identify this 'Antichrist' with the Papacy," in case you're curious.

Bachmann has denied that her church believes this, but ... it is definitely one of the fundamental doctrines of her church, according to her Synod's doctrinal statements. I mean, if Bachmann doesn't believe it, there are some very nice mainline Lutheran denominations to choose from, though they might be a bit squishy on biblical literalism and hatred of homosexuals.

In 2008, as I'm sure you remember, Michele Bachmann repeatedly called Barack Obama "anti-American" because of his "mentor," the Rev. Jeremiah Wright. And here, via Dumb Bachmann, is Bachmann's good friend and minister Bradlee Dean calling the pope "that devil disguised as a minister of righteousness."

It seems more than fair to ask whether Michele Bachmann is anti-Catholic, and whether, should she be elected president, she'd purposefully sabotage a Middle East peace deal in order to bring about the Second Coming. Or whether she'd launch some sort of tactical strike against Vatican City. I think she would. Look who she pals around with!