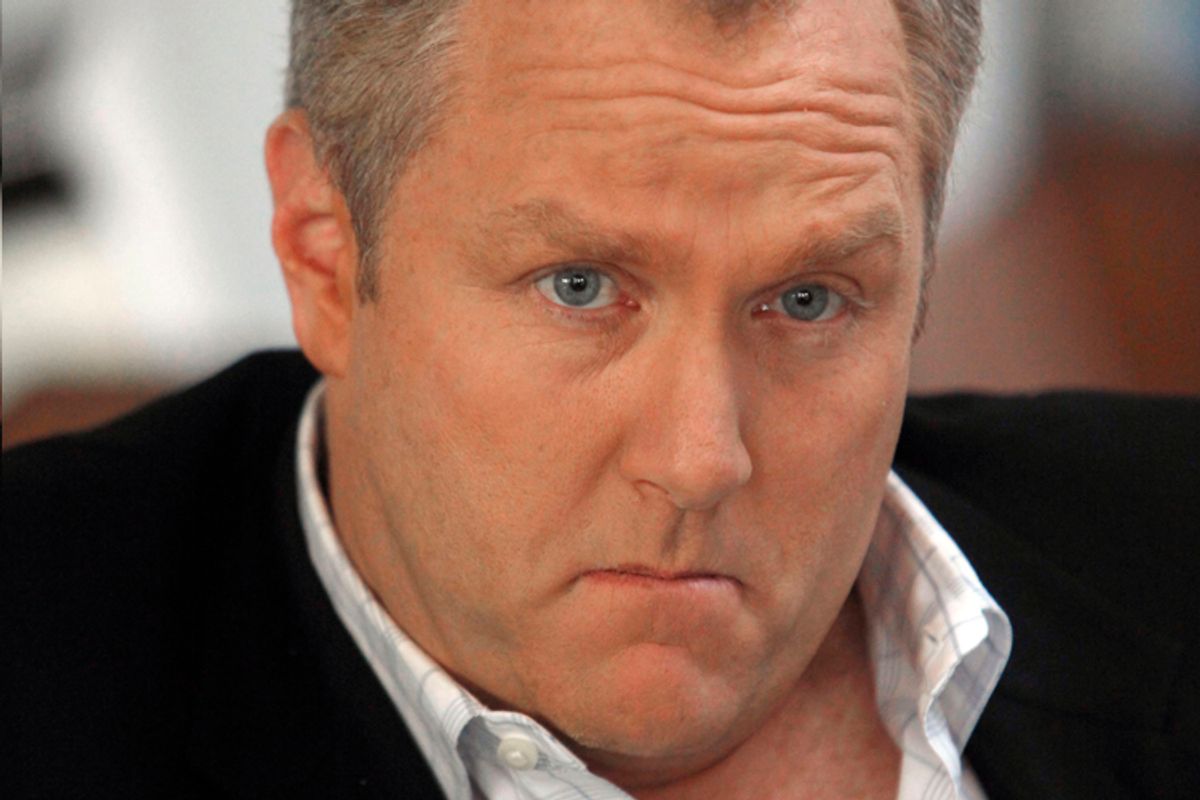 FILE - In this Feb.11,2010 file photo showing conservative online publisher Andrew Breitbart, seen during an at his home in Los Angeles. Love or hate him, you can't avoid Breitbart on cable TV these days. The 41-year-old father of four from Los Angeles has emerged as one of the most incendiary figures from the Beltway to Hollywood, a minor-league Limbaugh who mixes shock-jock calculation, conservative credo and answer-to-no-one swagger. He is the face of the new conservative outrage, exemplar of the smash-mouth politics that divide America. (AP Photo/Reed Saxon,File) (Reed Saxon)
--

Did Andrew Breitbart leak embarrassing personal emails sent to him by the mystery Twitter user at the center of the Anthony Weiner crotch shot scandal? Possibly.

This gets in the weeds of the Weiner saga, but it could help shed light on the origins of the story, so bear with us for a minute. Remember: This all started late last Friday evening when an underwear picture was allegedly sent from the congressman's Twitter account. But no one noticed the image except for Twitter user @patriotusa76, or Dan Wolfe, who seized on the alleged Weiner tweet and publicized it.

Making things stranger, it's clear from his Twitter feed that Wolfe is a right-wing activist who has been obsessed with Weiner for months, even tweeting way back on May 12 that a "top5 RightWing blogger has sexscandal pics" of Weiner.

In any case, within hours, Breitbart's BigGovernment.com site picked up on Wolfe's tweets and became the first media outlet to publish a story on the matter. From there the episode blew up -- slowly at first, and then more quickly when Weiner himself started acting strangely and refusing at first to deny sending the picture, then claiming that he couldn't say "with certitude" that the image was not of him. Given Breitbart's long history of unreliability and deceptive editing, mainstream reporters were at first (and to some extent still should be) leery of the whole story.

The newly released emails involving Breitbart shed light on one key question that remains unanswered: Who is patriotusa76, aka Dan Wolfe? Today, the Smoking Gun published emails that were, the site says, sent from Wolfe in recent days.

The first one, from May 30, does not list a recipient, but includes some notable admissions from Wolfe:

"I have ALOT of personal problems I didn’t want to go into--but as I become the focus of this I am more and more afraid this will all come out. I want to tell you why I haven't talked on the phone yet," he writes, continuing:

I have an en exwife suing me for custody of our 2 kids and for lots of other stuff right now. Her attorneys are after everything I own.

I have an ex girlfriend who has mental problems causing issues for me at work .

My business is suffering as a result.

If my exwife's attorney's got a hold of a call recorded with me on it they'd have a field day with that. I want to try to avoid.

She had recorded me twice before. She worked with my exgirlfriend and had two calls recorded.

It has gotten me in a lot of legal trouble.

I am screwed. If this comes out along with everything I'm dealing with here -- I don't know what to do.

This is intriguing -- especially that final line. And while the recipient on this email is blurred, the Smoking Gun report seems to suggest it was written in response to Breitbart's attempt "to arrange a conference call to discuss how to further exploit and advance 'Weinergate.'"

The other email published by the Smoking Gun, dated Saturday at 4 a.m., just hours after the alleged Weiner tweet went out, lists Breitbart as the recipient. It includes several attached images associated with the incident, including the original Weiner tweet. It ends with the promise, "We have more."

Breitbart did not immediately respond to an inquiry asking if he leaked the emails to the Smoking Gun. But Breitbart now appears to be attempting to distance himself from Wolfe. Here is a string of recent Breitbart tweets, beginning late Wednesday night:

Come out, come out wherever you are 'Dan Wolfe' @patriotUSA76! Stop hiding behind anonymity! Own up to your role & motivation.

Is there a real 'Dan Wolfe' @PatriotUSA76 or has someone for months elaborately pretended to be? #Weinergate gets more confusing!

So for reasons that are not entirely clear, Breitbart wants Wolfe to "own up" to his role in the scandal. The emails to the Smoking Gun at least partially document Wolfe's role. But there remain many unanswered questions: Was Wolfe involved in the "prank" or "hack" that Weiner has alleged? What's his real identity? How did he know back on May 12 that there was a lewd picture scandal involving Weiner on the horizon? And did Breitbart play some other role here that has not yet emerged? We'll update if we hear back from Breitbart.