So far, the mutant bacteria has sickened more than 1,500 people in Europe and killed 18 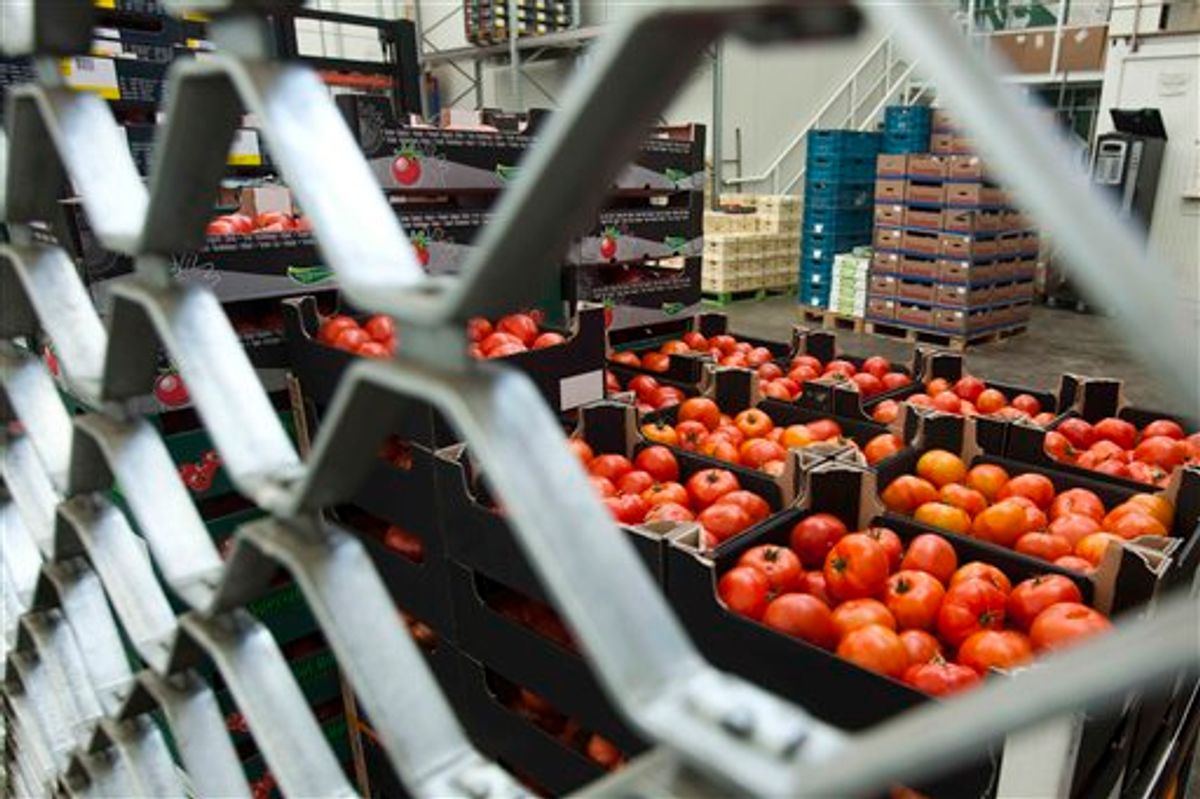 Boxes containing tomatoes stand behind a fence at the closed shop of a distributor at the central fruit and vegetable market in Berlin on Tuesday, afternoon, May 31, 2011. The selling of vegetables especially tomatoes, cucumbers and salad went down after the products are suspected to cause the E. coli outbreak in Germany. (AP Photo/Markus Schreiber) (AP)
--

The World Health Organization said Thursday that the E. coli bacteria responsible for a deadly outbreak that has left 18 dead and sickened hundreds in Europe is a new strain that has never been seen before.

Preliminary genetic sequencing suggests the strain is a mutant form of two different E. coli bacteria, with aggressive genes that could explain why the Europe-wide outbreak appears to be so massive and dangerous, the agency said.

Hilde Kruse, a food safety expert at the WHO, told The Associated Press that "this is a unique strain that has never been isolated from patients before."

She added that the new strain has "various characteristics that make it more virulent and toxin-producing" than the hundreds of E. coli strains that people naturally carry in their intestines.

So far, the mutant E. coli strain has sickened more than 1,500 people, including 470 who have developed a rare kidney failure complication, and killed 18, including one overnight in Germany, the country hit hardest by the outbreak.

Researchers have been unable to pinpoint the cause of the illness, which has hit at least nine European countries, and prompted Russia on Thursday to extend a ban on vegetables to the entire European Union.

Kruse said it's not uncommon for bacteria to continually mutate, evolving and swapping genes. "There's a lot of mobility in the microbial world," she said. Kruse said it was difficult to explain where the new strain came from but said strains of bacteria from both humans and animals easily trade genes, similar to how animal viruses like Ebola sometimes jump into humans.

"One should think of an animal source," Kruse said. "Many animals are hosts of various types of toxin-producing E. coli." Some scientists suspect the deadly E. coli might have originated in contaminated manure used to fertilize vegetables.

Previous E. coli outbreaks have mainly hit children and the elderly, but the European outbreak is disproportionately affecting adults, especially women. Kruse said there might be something particular about the bacteria strain that makes it more dangerous for adults.

But she cautioned that since people with milder cases probably aren't seeking medical help, officials don't know just how big the outbreak is. "It's hard to say how virulent (this new E. coli strain) is because we just don't know the real number of people affected."

Nearly all the sick people either live in Germany or recently traveled there. Two people who were sickened are now in the United States, and both had recently traveled to Hamburg, Germany, where many of the infections occurred. British officials announced four new cases, including three Britons who recently visited Germany and a German person on holiday in England.

Fearful of the outbreak spreading into Russia, the country on Thursday extended its ban on vegetable imports to all of the EU. Russia had banned fresh imports from Spain and Germany on Monday.

The United Arab Emirates issued a temporary ban on cucumbers from Spain, Germany, Denmark and the Netherlands. State news agency WAM said the Gulf nation's Minister of Environment and Water issued the order based on information "from international food safety agencies and news reports."

Lyubov Voropayeva, spokeswoman for the Russian Agency for the Supervision of Consumer Rights, told the AP the Russian ban has been imposed immediately and indefinitely.

The agency's chief Gennady Onishchenko told Russian news agencies that this "unpopular measure" would be in place until European officials inform Moscow of the cause of the disease and how it is being spread.

"How many more lives of European citizens does it take for European officials to tackle this problem?" he told the state-owned RIA Novosti news agency.

No fatalities or infections have yet been reported in Russia.

The European Union argued the Russian ban was disproportionate. Frederic Vincent, a spokesman for the EU's Health and Consumer Policy Commissioner John Dalli, said Thursday that the European Commission would write to Russia to demand further clarification of the ban.

Meanwhile, Spain's prime minister slammed the European Commission and Germany for singling out the country's produce as a possible source of the outbreak, and said the government would demand explanations and reparations.

The outbreak is already considered the third-largest involving E. coli in recent world history, and it may be the deadliest. Twelve people died in a 1996 Japanese outbreak that reportedly sickened more than 9,000, and seven died in a 2000 Canadian outbreak.