The state was last hit by a lethal twister in 1995 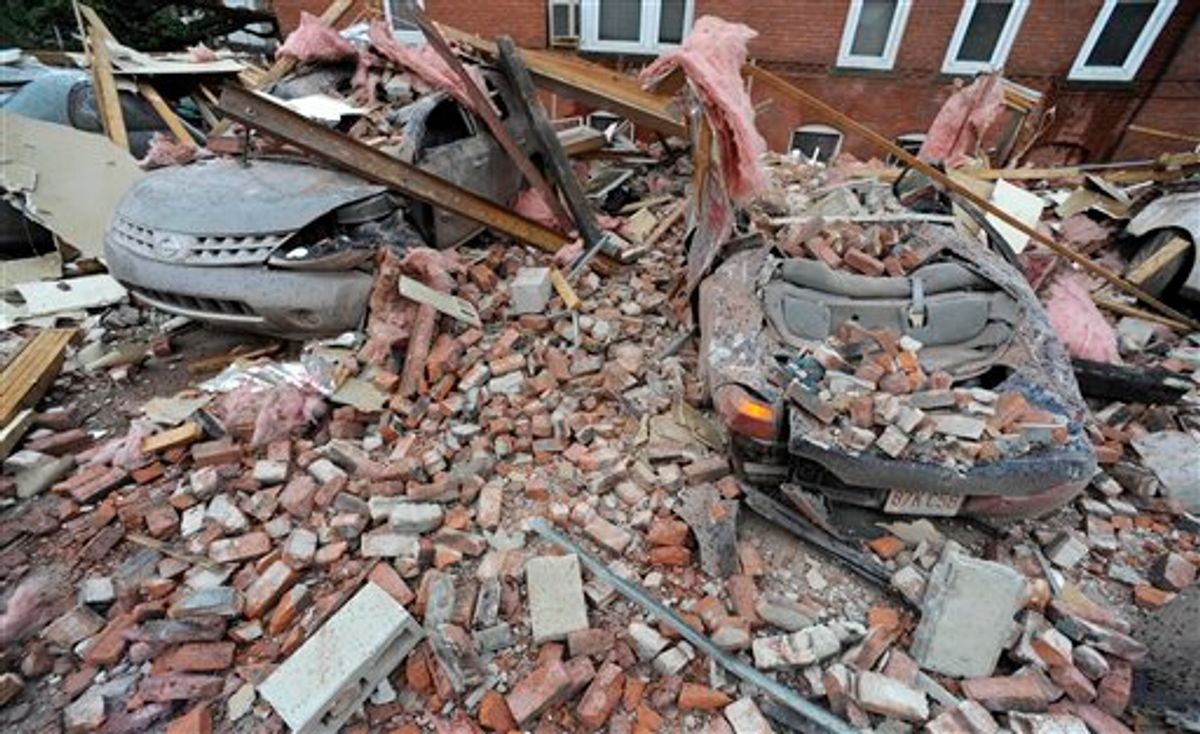 Bricks and debris that fell from a building lay on top of cars after a report of a tornado in Springfield, Mass., Wednesday, June 1, 2011. An apparent tornado struck downtown Springfield, one of Massachusetts' largest cities, scattering debris, toppling trees, and frightening workers and residents. (AP Photo/Jessica Hill) (AP)
--

The Rev. Bob Marrone was pained to see the steeple of his 137-year-old church shattered and strewn on the grass in the central Massachusetts town of Monson, yet he knows he's more fortunate than some of his neighbors who lost their homes after tornadoes tore through the state, killing at least four people, damaging buildings, uprooting trees and shattering lives.

"I can see the plywood of roofs, and see houses where most of the house is gone," said Marrone, pastor of The First Church of Monson. "The road that runs up in front of my house ... There's so many trees down, it's completely impassable."

Residents of 19 small communities in central and western Massachusetts were left to deal with widespread damage Thursday, one day after at least two late-afternoon tornadoes shocked emergency officials and residents more accustomed to dealing with snow and bone-chilling cold than funnel clouds spawned by spring storms.

The state normally averages about two tornadoes per year, with the last lethal twister in 1995.

"It was obviously an incredible surprise ... we'd been monitoring the weather all day and by early afternoon nobody was overly concerned ... but by late afternoon some storm clouds started to appear," spawning tornadoes that battered several towns, said Peter Judge of the Massachusetts Emergency Management Agency.

"Getting severe thunderstorms is not very unusual for a late afternoon at this time of the year, but damaging tornadoes in heavily populated areas are rare," Judge said. "We may have a couple of very slight tornadoes during the course of the year. They end up being in the forest somewhere, but not in major populated areas."

Some experts were to fly over the region Thursday to assess damage from the nation's latest burst of damaging weather, while others planned to review the situation from the ground to determine the number and strength of tornadoes that hit the region, National Weather Service meteorologist Benjamin Sipprell said.

The storm pulverized or sheared off the tops of roofs on Main Street in Springfield, a city of more than 150,000 about 90 miles west of Boston. A mounted video camera captured dramatic footage of a debris-filled funnel as it swept into downtown from the west, then swirling across the Connecticut River.

"Everything started shaking. The whole building was shaking," said Shonda Lopez, who was at home when the tornado struck before dinner time.

Lopez' sister, Margaret Alexander, hid in a closet in her apartment during the storm. She and 15 family members, including a daughter, two granddaughters and the family dog, Sasha, in a crate later went to the MassMutual Center, a cavernous event center in downtown Springfield that was converted into an emergency shelter.

Gov. Deval Patrick declared a state of emergency and called up 1,000 National Guardsmen after the storms, which brought scenes of devastation more familiar in the South and Midwest to a part of the country where such violent weather isn't a way of life.

The governor said the death toll was preliminary and police and firefighters were going door to door in Springfield to assure that no one was trapped in damaged buildings.

Massachusetts hasn't experienced a tornado since 2008, according to the Storm Prediction Center in Norman, Okla. The last killer tornado in Massachusetts was on May 29, 1995, when three people died in Great Barrington, a town along the New York state border. The state's deadliest recorded tornado on June 9, 1953, killed 94 people in the Worcester area.

Springfield Mayor Domenic Sarno said more than 40 people were admitted to hospitals in the city after Wednesday's tornado. State police said at least 5 people were seriously injured and required surgery.

In Sturbridge, at the junction of the Massachusetts Turnpike and Interstate 84, a half-mile section of Main Street was shut down after a tornado damaged homes and felled trees, according to town administrator Shaun Suhoski.

Suhoski said some people suffered "cuts, scrapes, bruises," though no serious injuries were immediately reported. The storm blew trees into houses and severely damaged telephone poles and rooftops, he said.

Two people were killed in West Springfield, one in Springfield and another in Brimfield, according to Patrick, who did not immediately know the circumstances of the deaths.

The storm hit as workers were starting the evening commute home. Police closed some highway ramps leading into Springfield.

Upstairs at the Mass Mutual Center, seniors from Minnechaug Regional High School in Wilbraham dressed in gowns and tuxedos arrived for their prom, which went on as scheduled despite the tornado.

Jola Wnuk said she almost didn't attend because of the weather. But her mother persuaded her to go. "She said it's once in a lifetime," Wnuk said.

Photographers hired for the prom said they had a frightening view of the tornado just outside the center's ceiling-to-floor windows.

"It looked like birds were flying out of the trees and it was rubble," said Martha Vachon of Photography by Duval of Palmer.

The storm knocked out power to tens of thousands of customers. Crews from utilities in Connecticut and New Hampshire were called in to help restore service.

Among the injured in Springfield was a retired priest, according to a spokesman for the Roman Catholic Diocese of Springfield. The priest was living at St. Michael's Retired Priest Residence, which was damaged by the tornado.

A tornado watch had been issued earlier for much of the East Coast, including Philadelphia, New York and Boston.

Bob Pashko, of West Springfield, said he was returning from his doctor's office when the storm started and he went to a downtown bar in Springfield to wait for a ride.

"The next thing you know, the TV says a tornado hit the railroad bridge in West Springfield," Pashko said. "It's the baddest I've seen."

At the bar, Pashko said, the owner told people to get away from the window as patrons saw the storm on TV.

"To see it live on TV when I'm five football fields away is better than being outside," the 50-year-old Pashko said.

Members of the state's congressional delegation said they would seek federal assistance for storm-damaged areas.

Patrick said there was extensive damage in Hampden County, especially to homes and other structures. He asked superintendents in the 19 affected communities to cancel school Thursday and told nonessential state employees in counties impacted by the storms to stay home.

Patrick said the damage has hit home for him and Lt. Gov. Timothy Murray. Murray is the former mayor of Worcester and Patrick owns a home in western Massachusetts.

"These are my neighbors and my friends, too; the lieutenant governor's as well," Patrick said. "We're worried about our friends and neighbors, our fellow citizens in western Massachusetts who have been affected by this terrible tragedy."