Was Abe Lincoln a Jewish pawn of the Rothschilds?

He freed the slaves, preserved the Union and pushed major banking reform. That last part still gets people upset 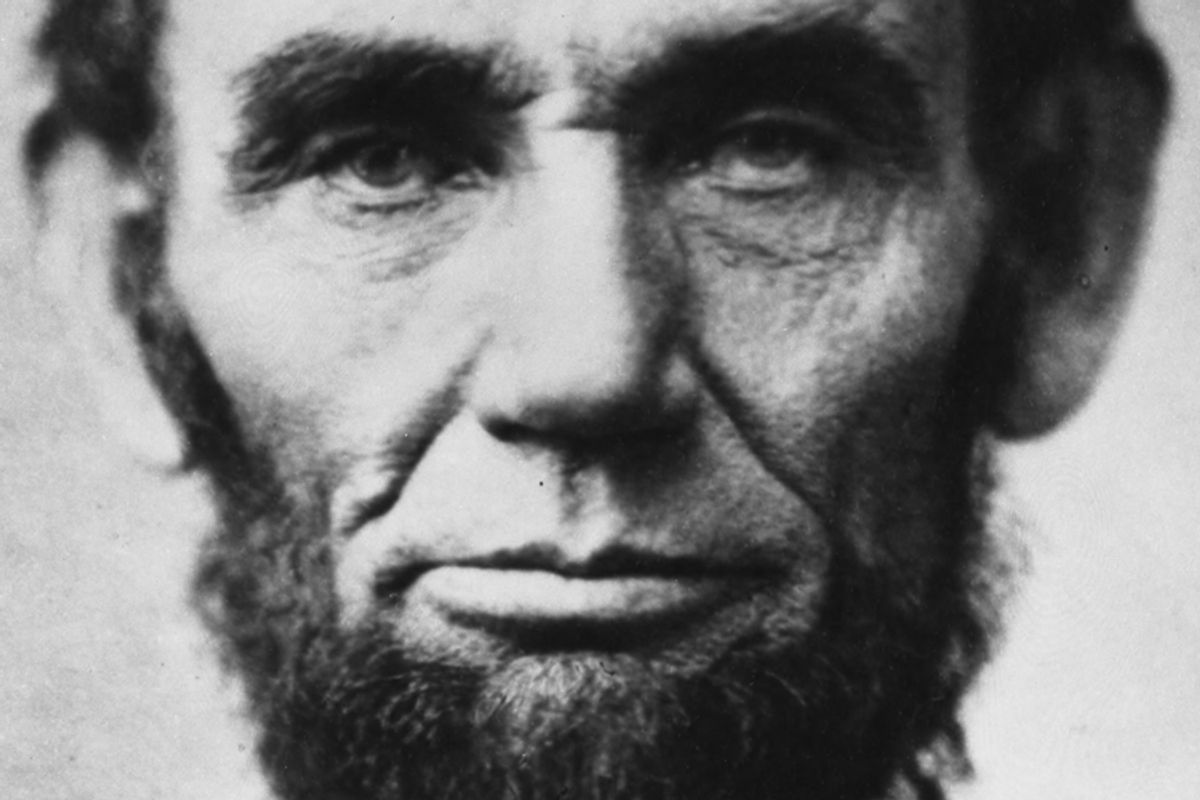 At Salon, we try to keep abreast of as many currently percolating conspiracy theories as possible. Not only is it good for business -- readers always love a good dose of the crazy -- but in recent years what once could be easily dismissed as irredeemably fringe now pops up in mainstream political discourse with alarming and increasing frequency. One day, you might be deleting an email that seems to be little more than random gibberish, and then before you've caught your breath, a presidential candidate is quoting from that same email while out on the campaign trail.

Even with this background in mind, I still probably should not have engaged with a correspondent who wanted me to write a story about a photograph purported to be of a "young Jewish-looking Abraham Lincoln." When I asked what relevance a revisionist reading of Lincoln's religion or ethnicity might have to the historical record, I was informed that a) "he would want to free the black slaves because his ancestors were traumatized about being slaves in Egypt" and b) "he would try to help the European Jews (Rothschilds) in taking over the United States by starting a war and having Americans fight one another while they take control of our banking system."

News like this can make a person reconsider celebrating Presidents' Day, if you take it seriously, which, initially, I did not. You didn't have to be Jewish to think slavery was an abomination, and what I can glean from the historical record seems to indicate that the Rothschilds thought an American Civil War would be bad for business. But I still felt compelled to do some googling to see if I could get a sense of where the "Abe Lincoln as Jewish Rothschild pawn" ranked on the Birther/911 Truther conspiracy theory Richter scale.

I discovered the usual mish-mash of fabricated quotes and wild anti-Semitic ravings. Maj. Gen. Count Cherep-Spiridovitch to the white courtesy telephone, please! One thing you discover quickly when googling the keywords "Rothschilds" and "Lincoln." Blaming Jews for starting the Civil War has been a popular pastime for a long, long time. And I have to say: It certainly simplifies things to decide that Lincoln himself was just another rootless cosmopolitan in on the plot. Even if the "evidence" for this assertion is less than compelling.

But if you dig a little deeper on the specific accusation that the Rothschild motivation for starting the Civil War was to take over the U.S. banking system, you suddenly find yourself facing a set of concerns that are surprisingly close to the surface of contemporary political discourse involving the national debt and monetary policy.

Because Abe Lincoln didn't just free the slaves and preserve the Union. He also ended the so-called "free banking" era, and established a national currency in which paper notes backed by the U.S. government were by law considered to be legal tender.

Mainstream economic historians tend to portray the "free banking" or "wildcat banking" era as chaotic and prone to banking panics. Loosely regulated by states, and not at all by the federal goverment, banks had the power to issue their own currency, resulting in a proliferation of competing bank notes that sometimes weren't worth the paper they were printed on. From this perspective, the passage of the National Banking Acts in 1863 and 1864 marked a welcome step in the maturation of the U.S. financial system.

But whether or not you accept that explanation of history -- and many, many libertarians, led by Rep. Ron Paul, do not -- there was also another clear reason for the consolidation of central government control over U.S. currency. Lincoln had to find a way to pay for his enormously expensive war, and issuing paper currency theoretically backed by government securities was the method he used to do it.

If you listen to some of the more wild-eyed libertarian voices out there, you will find that it is at this point that America really went off the tracks. Abraham Lincoln centralized government control over the money supply! And freedom died. We lost our bearings during the Civil War and have never managed to find our way back.

So of course he's a traitor! And of course some way must be found to transform him into an alien "other."

Remind you of someone else? Some other president who faced a national emergency, borrowed a lot of cash to deal with it, then pushed through major bank reform legislation and found himself immediately tarred as a Muslim socialist out to destroy a great nation? And who now faces an array of contenders for the White House calling for a return to the gold standard, a balanced budget amendment, and the abolishment of the Federal Reserve? It's all connected, man. Abraham Lincoln, the president who ended slavery, and Barack Obama, the first black president of the United States, are peas in the same pod, both irredeemably stained by the hard fiscal decisions they had to make to save their nation.