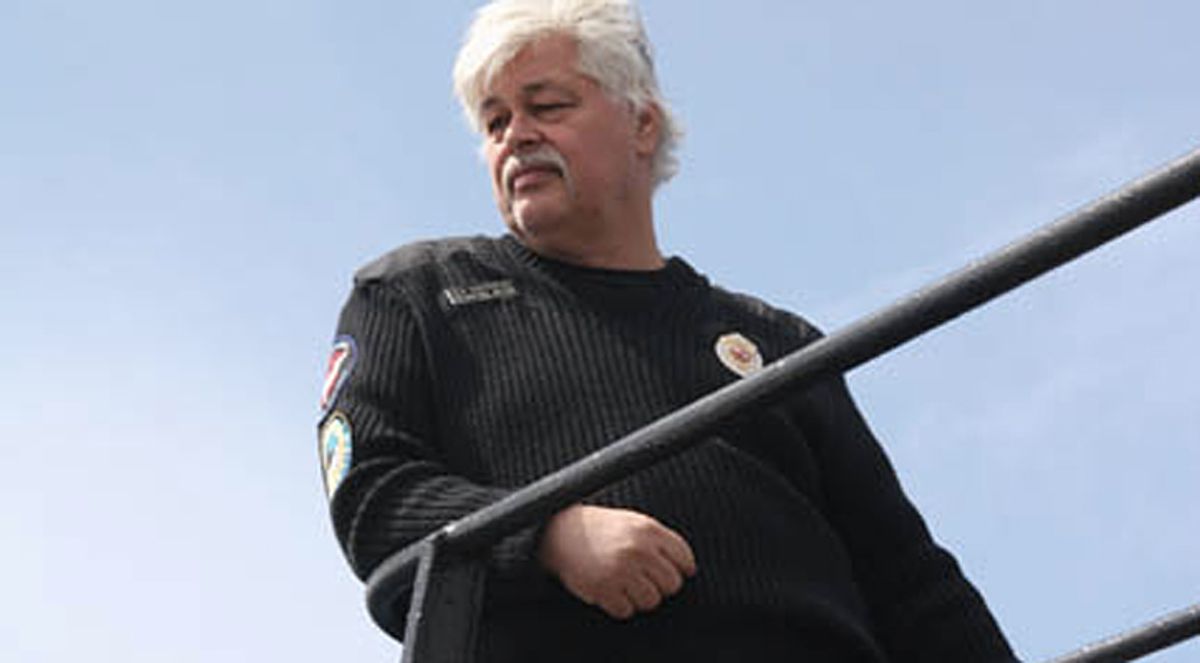 The view from the bridge: Paul Watson, founder of the anti-whaling group Sea Shepherd Conservation Society, surveys his boat in the season premiere of Animal Planet's "Whale Wars."
--

"We live on the most incredible planet, and yet we abuse it, and we abuse it mercilessly," says Paul Watson, head of the Sea Shepherd Conservation Society, in the opening moments of the season 4 premiere of "Whale Wars" (Animal Planet, Fridays, 9 PM/8 central). "Right now we're living in a major extinction event. We'll lose more species of plants and animals between 2000 and 2065 than we've lost in the last 65 million years. If we don't find answers to these problems, we're gonna be victims of this extinction event that we're at fault for."

I have ethical objections to how reality shows strive to turn real people into mythic heroes; the nature-centric cable series on Discovery and Animal Planet are often especially guilty of this. But "Whale Wars" is one of the better shows of its type, and its message is so urgent that it eclipses aesthetic qualms that would otherwise obsess me. Simply put, Watson and his associates are doing heroic, valuable work -- work that's bound to provoke debate even among people who are sympathetic to his cause, because it operates beyond the law, in international waters, and necessarily includes the risk of property damage, injury and death, both for himself and his adversaries.

Watson sees his mission to harass, intimidate and otherwise mess with commercial whalers as a holy calling, and talks about it as if he were the John Brown or Nat Turner of aquatic conservation. He was kicked out of Greenpeace a quarter century ago for being too confrontational. He playfully refers to himself as an "eco-terrarist" -- as in "Terra," the word for earth -- rather than "eco-terrorist," but there's no doubt that he and his fellow Sea Shepherds endorse and use extreme measures.

"Last year we were able to save more whales than [the whalers] killed," Watson tells a news crew in the opening section of tonight's premiere. "This year we're gonna go for 100%. We're gonna get on them right away and try to shut them down immediately." A journalist from Japan -- the world's leading exponent of illegal whaling -- skeptically tells Watson that nobody can ever stop it. "That's what they said once, that you can't stop slavery," Watson replies, "But it was stopped. Yeah, we can stop whaling."

It's a risky mission. During Watson's long crusade, he's seen whalers and his own crew people injured, and has been sued, censured and otherwise treated as a pariah by Norway, the Netherlands, Canada and Iceland as well as Japan. Last year he lost one of the Sea Shepherd fleet's vessels, the trimaran Ady Gil, when it crashed into a Japanese whaling ship. The incident set the group back a bit, depriving them of a key vessel that would have cost $1.5 million to replace and landing its captain, Paul Bethune, in a Japanese jail. But the Shepherds have also acquired an international network of admirers, some of whom kick in money to support Watson and his team. One of the highlights of the premiere is the unveiling of a privately funded replacement for the lost trimaran, a sleek, black, science fictionally striking vessel named Gojira, after the original Japanese name for Godzilla.

While the premiere touts the group's victories, it never pretends that Watson and company have made irrevocable forward progress. Every episode of "Whale Wars" includes footage of whales, dolphins and other protected species threatened with extinction by commercial fishing. Some of the images are horrendously violent. We see twitching whales being hauled up onto ship decks, streaming gore, and helicopter shots of Japanese whaling vessels flagrantly exploiting loopholes in international anti-whaling resolutions by holding up signs that announce that they're doing "scientific research" while behind them, crew members wrangle slabs of whale flesh.

Like the excellent, very disturbing eco-documentaries "Sharkwater" and "The Cove," "Whale Wars" positions itself both a rousing high seas adventure and a document of an ongoing act of inter-species genocide. The group's main foe, the Japanese whaling industry, isn't about to give up without a fight. Even though the Shepherds' vigilantism has been more effective than anyone could have foreseen, there is still a sense in Japan that Americans generally, and American conservationists in particular, are practicing a kind of coded racism or xenophobia -- that they are refusing to respect a lucrative business and a pursuit that's been a part of Japan's cultural identity for hundreds of years, harming the mostly working-class whalers' ability to earn a living, and applying a hypocritical double standard as well, by insisting that certain aquatic creatures deserve total protection even as the so-called conservationists eat other species of sea life for nourishment. Just when the Shepherds think they've turned the tide, here comes a press release from the Japanese whaling fleet saying it's about to double the number of whaling vessels. Suck it, Yanks.

Is it a sin to kill an animal that's deeply intelligent, or that exhibits faintly human-like characteristics? Isn't that anthropomorphism disguised as moral superiority? "Whale Wars" never leaves any doubt as to where it comes down on those questions, but it also engages them actively and with real curiosity. Between the occasional outraged soliloquies by Watson and more measured statements by his colleagues and opponents, "Whale Wars" adds a dollop of Socratic dialog to its melodrama. The show's dire tone says, Pay attention and formulate an opinion on this, because it's important; how you feel about it helps define who you are.

And yet "Whale Wars" never forgets that there's more to these activists' lives than indignation. Much of the show is shot and edited like an action picture, complete with a cheesy, galumphing score that wouldn't be out of place in a Michael Bay flick. But every now and then, often when you least expect it, the series lowers the volume, slows the pace, and becomes a travelogue of remote regions, and a paean to the remains of unspoiled nature.

Midway through tonight's premiere is a scene that shows Watson's own boat (named after Watson's late friend and fellow ecological activist Steve Irwin, a.k.a. the Crocodile Hunter) cruising past an iceberg on the outer edge of the Antarctic sea. From one angle the iceberg looks like flattened top hat; from another, it looks like a woman's shoe. The sound drops low for a while, and the score relaxes into a gentle solo piano riff that sounds like Erik Satie's "Gymnopédie No.1."

Watson and his colleagues gather on the deck to watch the iceberg as they glide past it. "So beautiful," a crew member says. "You can't get much more remote than we are now," Watson says. His voice is soft, but there's joy in it, and for a moment, he looks happy.