The foreign-services veteran, 80, held the top post at the State Department under George H.W. Bush 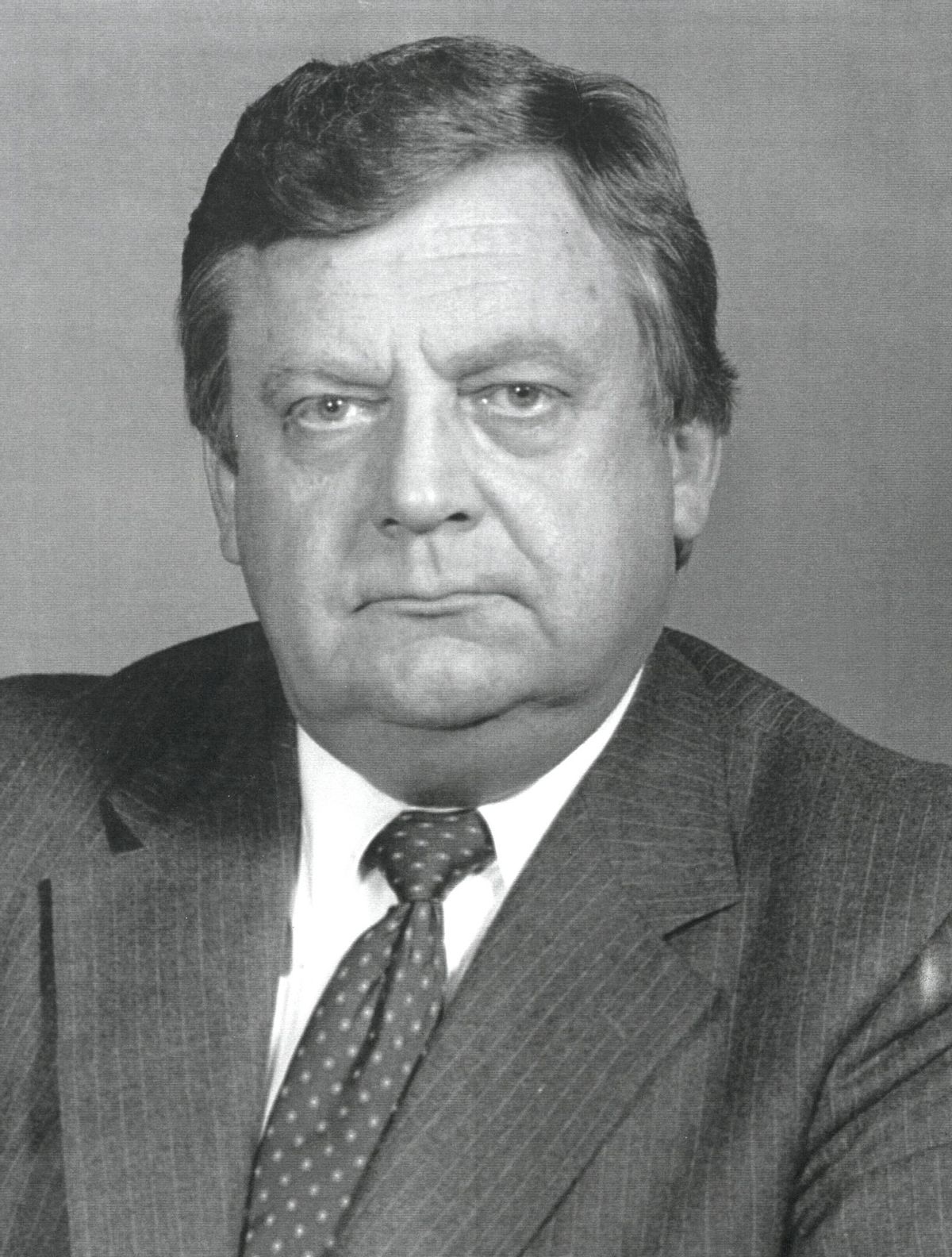 The only career foreign service officer to rise to the position of secretary of state, Lawrence Eagleburger was a straightforward diplomat whose exuberant style masked a hard-driving commitment to solving tangled foreign policy problems.

"As good as they come," recalled his immediate predecessor as America's top diplomat.

In subsequent years, he was available to offer advice, along with other former senior officials, to Hillary Rodham Clinton as she prepared for the job under President Barack Obama.

Eagleburger died in Charlottesville, Va., after a short illness, according to a family friend, Christy Reap. No further details were immediately available.

Tributes poured in immediately, from Obama and Clinton, to two of his one-time bosses, Bush and former Secretary of State James A. Baker III.

Eagleburger held the top post at the State Department for five months when Baker resigned in the summer of 1992 to help Bush in an unsuccessful bid for re-election.

As Baker's deputy, Eagleburger had taken on a variety of difficult assignments, including running the department bureaucracy. With Baker often abroad, Eagleburger was left to tend to the home front.

Eagleburger told The Associated Press in 1990 that he operated "sort of by osmosis. You get a feel how he (Baker) would react to a situation."

He did not fit the image of the office.

He was hugely overweight. He chain-smoked cigarettes, sometimes with an aspirator to ease chronic asthma. He was afflicted with a muscle disease.

Born Aug. 1, 1930, in Milwaukee, Eagleburger graduated from the University of Wisconsin. He grew up in a Republican family, once telling a reporter for the Milwaukee Journal that "my father was somewhat to the right of Genghis Khan."

Eagleburger remained a Republican, but of a more moderate stripe.

Bush called Eagleburger "one of the most capable and respected diplomats our foreign service ever produced, and I will be ever grateful for his wise, no-nonsense counsel during those four years of historic change in our world."

In a statement, Bush said that "during one of the tensest moments of the Gulf War, when Saddam Hussein began attacking Israel with Scud missiles trying cynically and cruelly to bait them into the conflict, we sent Larry to Israel to preserve our coalition. It was an inordinately complex and sensitive task, and his performance was nothing short of heroic."

Baker said Eagleburger "was a legend in the U.S. Foreign Service, a consummate professional who served his country expertly and with great dignity as a selfless diplomat." He said his former colleague was "superb at divining trouble and heading it off. That's why he became the first Foreign Service officer in history to rise to deputy secretary of state and later to secretary of state. Simply stated, Larry Eagleburger was as good as they come -- loyal, hard-working and intelligent, a trifecta for an American diplomat."

In what may have been his last public appearance, a clearly frail Eagleburger regaled a crowd of State Department officials last month, including Clinton and former Secretary of State Madeleine Albright with stories about his early days in the foreign service during the Kennedy administration.

It came May 18 at an event to mark the 50th anniversary of the State Department's Operations Center, the department's 24-hour, seven-day-a-week nerve center. Eagleburger had many in the audience rolling with laughter as he recalled manic confusion among Kennedy's national security advisers during the Bay of Pigs invasion that led then-Secretary of State Dean Rusk to order the creation of a round-the-clock clearing house for information coming in from around the world.

"Larry believed in the strength of America's values, and he fought for them around the world," Clinton said Saturday. "He was outspoken, but always the consummate diplomat. Even in retirement, Larry remained a staunch advocate for the causes he believed in. He never stopped caring, contributing, and speaking out."

Obama called Eagleburger a statesman who "devoted his life to the security of our nation and to strengthening our ties with allies and partners."

For five years, before joining the first Bush administration in 1989 as deputy secretary of state, Eagleburger was president of Kissinger Associates, offering companies advice on international politics and cashing in on his connections as did Kissinger and Brent Scowcroft, a former national security adviser.

The job paid handsomely. He earned more than $1 million in salary and severance payments in his final year.

After Bush's defeat in 1992, Eagleburger took a similar job with a law firm headed by former Sen. Howard Baker, R-Tenn. Eagleburger's intimate knowledge of the issues and the key players was a valuable commodity

Eagleburger chaired the International Commission on Holocaust Era Insurance Claims, which sought to settle decades-old claims brought by victims of Nazi brutality whose right to insurance settlements had been violated during World War II.

Eagleburger served in 2006 on the Iraq Study Group, the blue-ribbon panel headed by Baker and former Rep. Lee Hamilton, D-Ind., that called for a gradual troop pullback and stepped-up diplomacy to help extricate the U.S. from Iraq.

"When I was asked to do this by Jim Baker, I was not at all sure that I was going to want to do it because I had really serious doubts as to whether bipartisanship could prevail in this sort of a session," Eagleburger said at the time.

In 2008, he was a prominent supporter of Arizona Sen. John McCain's presidential candidacy. He did tell an NPR interviewer that McCain's running-mate, Sarah Palin, wasn't up to the task of taking over the presidency in a crisis but could become "adequate."

Over the years, a sense of humor served Eagleburger well.

Asked at a Senate confirmation hearing if he had ever in public or private pinched a woman's behind, Eagleburger replied: "Can I divide that into two questions?"

Asked by reporters how he planned to run the State Department after Baker's departure, Eagleburger responded: "Badly."

"He was a supremely talented diplomat and public servant. And very funny. I will miss him very much," Defense Secretary Robert Gates said Saturday while traveling in Afghanistan.

Eagleburger named each of his three sons Lawrence -- they use their middle names Scott, Andrew and Jason -- and had a lack of pretension that was appreciated on Capitol Hill, and elsewhere.

"It was ego," Eagleburger told The Washington Post about giving his sons the same first name. "And secondly, I wanted to screw up the Social Security system."

"He's a thoughtful, behind-the-scenes operator who allows you to believe he's open to your advice," said Sen. John Kerry, D-Mass., on another occasion.

During the Persian Gulf war, Bush sent Eagleburger to Israel, where he was held in high regard, to counsel patience as Iraq landed Scud missiles on the Jewish state. The Bush administration did not want Israel to retaliate, fearing it would shake the coalition with Arab nations that had joined in the fight to liberate Kuwait.

Eagleburger surveyed bombed-out rubble, supporting himself with a cane.

"I knew the Israelis. ... (The missile attacks required) someone they know cares about them," he said.

He also made clear he would hold to the American line even if they disagreed with it.

When he returned to Washington and a reporter asked about his poor health, Eagleburger retorted: "What are you writing for -- some medical magazine?"

Eagleburger took on special missions to China and to Panama. His greatest concentration in overseas assignments was on Yugoslavia, where he spent seven of his 11 years abroad.

In 1992, he likened the country's dissolution, which began a year earlier, to a Greek tragedy and predicted "a lot of people are going to die."

He found fault with all ethnic groups; found none of them particularly noble.

Eagleburger was married to the former Marlene Ann Heinemann, who died last year. Her family was in the bakery business in Milwaukee. An earlier marriage ended in divorce.

Their home was a 40-acre estate west of Charlottesville, Va., where Eagleburger enjoyed listening to opera and playing poker, which he often did with reporters accompanying him and Kissinger on long overseas flights.

"Lawrence is not a worrier," his wife once said. "If he thinks he can do something about a problem, he does. If he doesn't, he can compartmentalize it and come back to it."