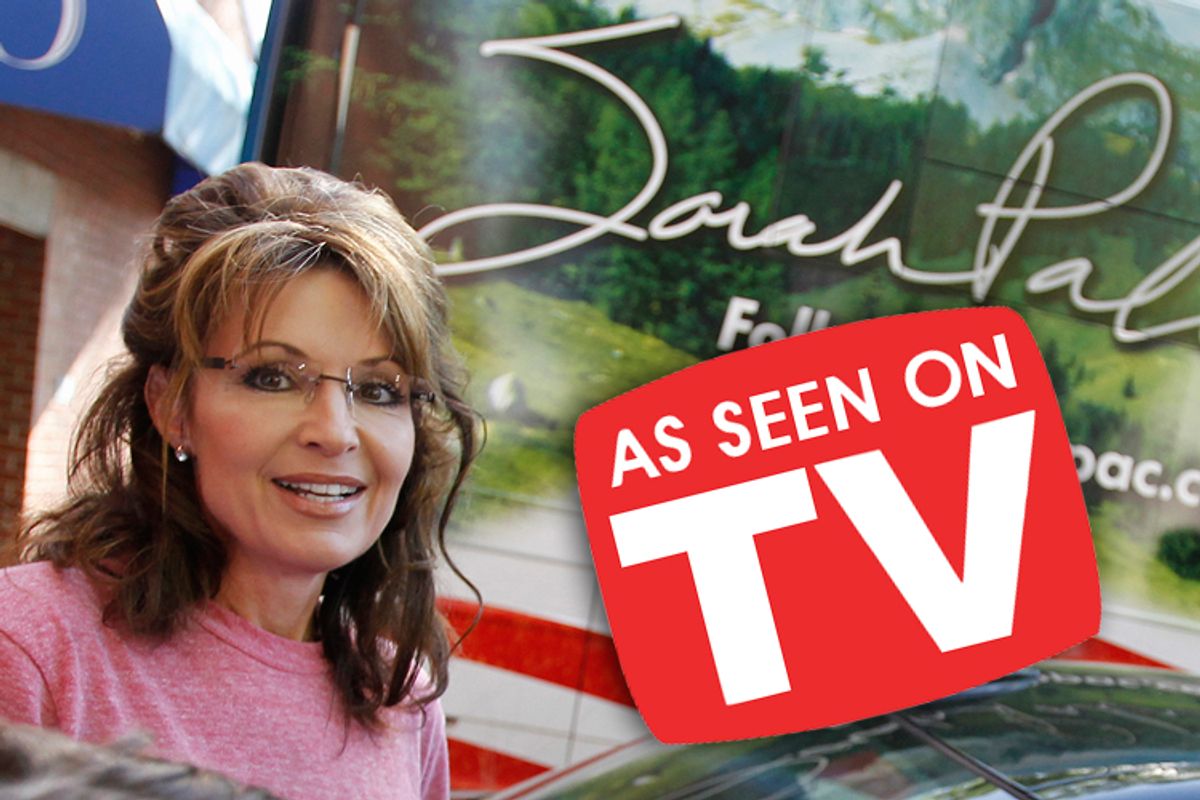 Sarah Palin in front of her bus
--

Since kicking off her "One Nation" bus tour, Sarah Palin has insisted that she's just on a road trip to see iconic places in American history, like the part of New Hampshire where Mitt Romney declared his presidential candidacy. Suspicious that even a Real American like Palin would need a bus bedecked with the Constitution for a simple family vacation, the media has been beside itself trying to figure out if this means Palin is running for president. But it's almost beside the point. Whether she’s testing the waters for a presidential bid or just testing a new reality show format, Palin wins either way.

Nothing she's done since resigning her position as governor of Alaska really suggests she's planning a serious presidential candidacy, nor are her current activities indicative of any real commitment to public service. What they do demonstrate is an understanding that outrageous statements, calculated controversy and the blurring of the line between candidate and celebrity are a sure route to lots of attention -- and lots of money.

For all of Palin's gushing over the Statue of Liberty and Independence Hall, the most revealing stop of the trip occurred Wednesday, when she sat down for a slice of pizza with Donald Trump. Fresh off his own feint at a presidential bid, Trump seems to share Palin's understanding that there's money to be made in political celebrity.

Usually, the money-politics relationship works the other way. Mitt Romney is a classic case of a wealthy wannabe contender who's used the considerable funds at his disposal to buy name recognition. But what Palin and Trump have figured out is that high profiles can generate money rather than the reverse. Of course, it's nothing new for politicians to cash in on their reputations after leaving office; hefty book advances and cushy jobs as consultants are pretty standard. But not many politicians have the celebrity -- or the audacity -- to use their political career as an extremely lucrative piece of performance art.

Because whether by picking fights with the president or allying oneself with conspiracy theorists, parlaying political fame into fortune requires two things: getting the spotlight and staying in it.

This strategy can be risky, as Trump's experience demonstrates. Attempts to stoke controversy and paint yourself as a straight-talking free thinker can quickly give way to ridiculous, unhinged pronouncements. It's hard to know how badly the anti-Trump backlash hurt the Donald financially, since he won't release information on his net worth, but by the time he withdrew from the race he'd never quite entered, it was clear his personal brand -- upon which much of his value as a businessman is staked -- had taken a beating. Groupon announced it would withdraw ads from "The Apprentice" website, and ratings for "Celebrity Apprentice" tanked as viewers grew increasingly disgusted with Trump's rantings. Tragically, Trump even had to give up his role as driver of the pace car at the Indy 500.

Palin's situation is a bit different. Though Trump sought to use politics to boost his celebrity, his value is fundamentally rooted in the private sector, where anything goes -- provided it stokes ratings or boosts sales. (See also: Charlie Sheen.) Trump's mistake was in miscalculating how far he could push things before incurring a backlash. Palin's fame and fortune, on the other hand, are derived directly from her political persona. She's in the business of politics, and so are her backers; they're not about to be caught off-guard by a controversial statement or two. Plus, Palin is much savvier than Trump when it comes to getting her message across. She knows how to play the political press in a way that Trump never quite got the hang of, and they hang on her every word. Of course, reprimanding the media for covering her is futile; what's good for Palin's pocketbook is good for page views too. Fox figured that out early on and institutionalized it.

The question is whether any of this should bother us. For all our bellyaching over the prioritization of the horse race over "the issues," most elections are ultimately determined by fundamentals like the state of the economy. And anyone who knows even a little bit about American political history knows that the noble civil servants in the mold of Mr. Smith are few and far between in any era. The self-promoting huckster, from Huey Long to Glenn Beck, is a much more pervasive figure, and arguably the one that best expresses America's contradictory impulses toward populism and getting really, really rich.

And yet, it's hard not to feel that taking such cynicism in stride only cements our disillusionment about the possibilities of electoral politics. When the people we proclaim to be leaders don't take the democratic process seriously, why on earth should anyone else?