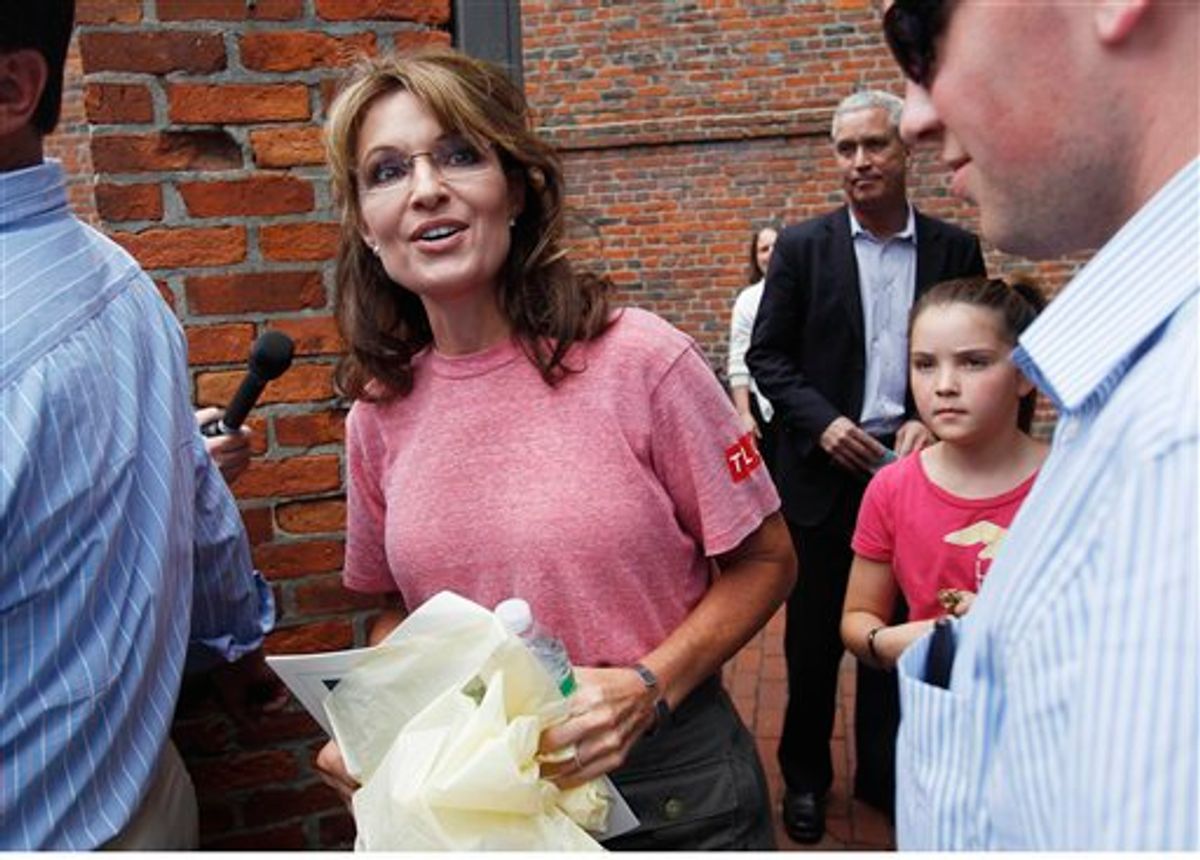 Sarah Palin insisted Sunday that history was on her side when she claimed that Paul Revere's famous ride was intended to warn both British soldiers and his fellow colonists.

"You realize that you messed up about Paul Revere, don't you?" "Fox News Sunday" anchor Chris Wallace asked the potential 2012 presidential candidate.

"I didn't mess up about Paul Revere," replied Palin, a paid contributor to the network.

Palin, who again said she has not decided whether to run for president, was asked about the Revolutionary War hero during a stop Thursday in Boston on her East Coast bus tour.

Palin's brush with the nation's history came toward the end of her "One Nation" bus tour that generated intense interest as she traveled from Washington to New England. Along the way, she steadfastly refused "a million times" to say whether she was running for president.

"I'm publicizing Americana and our foundation and how important it is that we learn about our past and our challenges and victories throughout American history, so that we can successfully proceed forward," Palin said in the broadcast interview. "It's not a campaign tour."

And was she leaning toward or against running, Palin was asked?

"Still right there in the middle," she said.

There's no ambiguity about the intense interest Palin generates, a point that doesn't sit comfortably in some quarters of a party without a clear front-runner to face President Barack Obama next year.

Palin's closely watched bus trip is a key example. Its camera-ready events competed for coverage in the same week and region as former Massachusetts Gov. Mitt Romney's entry into the race. His candidacy is perhaps the most formidable of the emerging field.

Asked Sunday whether he could envision supporting Palin for president, Mississippi Gov. Haley Barbour, a former hopeful, told "Face the Nation" on CBS: "If Barack Obama was the head of the other ticket, I could."

For her part, Palin was contrite.

"I apologize if I stepped on any, any of that PR that Mitt Romney needed or wanted that day," Palin said. "I do sincerely apologize. I didn't mean to step on anybody's toes."

While she continued to insist that she wasn't competing for anything in particular, Palin said she would welcome Minnesota Rep. Michele Bachmann, another Republican with tea party appeal, to the race.

For now, Palin is clearly grappling with the downside of celebrity.

Even her otherwise successful media events can leave lingering questions about Palin's grasp of and interest in history, public policy and other subjects of substance.

On Sunday, Palin insisted she was right about the purpose of Revere's famous "midnight ride."

"I know my American history," she told Wallace.

The Paul Revere House's website says that on April 18, 1775, Dr. Joseph Warren instructed Revere to ride to Lexington, Mass., to warn Samuel Adams and John Hancock that British troops were marching to arrest them. In an undated letter posted by the Massachusetts Historical Society, Revere wrote of the need to keep his activities secret and his suspicion that a member of his tight circle of planners had become a British informant.

According to the letter, written around 1798, Revere did give up some details of the plan to the British that night, but after he had notified other colonists, and under questioning by British soldiers.

Surrounded, Revere revealed "there would be five hundred Americans there in a short time, for I had alarmed the Country all the way up," he wrote.

More downside for Palin is that nothing is private.

Looming in the week ahead is Alaska's release of 24,000 pages of emails sent and received by Palin during her time as governor. They will provide an inside look into her rise from obscurity to a spot on the national stage.

The emails cover a majority of her short term as governor and could provide the most insight into how she governed the nation's largest state. Her only other elected office was as a two-term mayor of her hometown of Wasilla, Alaska, which has a population of about 7,000.

The emails cover the first 21 months of Palin's tenure, ending in September 2008, after GOP presidential nominee John McCain selected her to be his running mate.

Palin resigned partway through her term, in July 2009.

"Every rock in the Palin household that could ever be kicked over and uncovered anything, it's already been kicked over," Palin said, noting that a lot of the emails are between staff and family members and were not meant for public consumption. The letters, she said, "won't distract me."