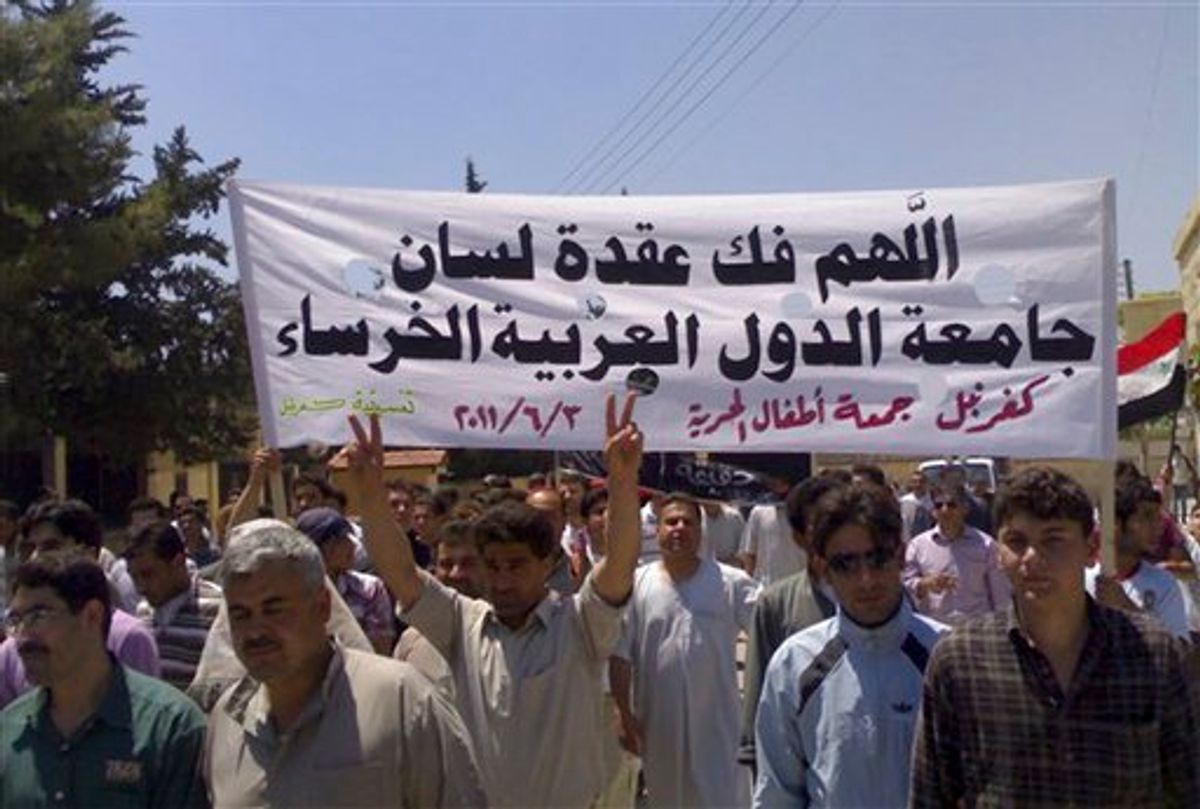 In this citizen journalism image made on a mobile phone and provided by Shaam News Network, Syrian protesters hold an Arabic banner read:"May God help break the silence of the Arab League," as they march during a protest at the village of Kfar-Nebel, in the northen province of Edleb, Syria, on Friday June 3, 2011. Syrian troops pounded a central town with artillery and heavy machinegun fire Friday, killing at least two people in the latest onslaught as authorities cut off Internet service in several regions in an apparent move to prevent the uploading of videos of anti-regime demonstrations, activists said. (AP Photo/Shaam News Network) EDITORIAL USE ONLY, NO SALES, THE ASSOCIATED PRESS IS UNABLE TO INDEPENDENTLY VERIFY THE AUTHENTICITY, CONTENT, LOCATION OR DATE OF THIS HANDOUT PHOTO (AP)
--

Syrian TV claims 120 police and security forces have been killed by armed groups in a northern town.

It says 82 of them were killed in an attack on a security post. The report on Monday could not immediately be verified.

The confrontations occurred in the town of Jisr al-Shughour in Idlib province were Syria's military has been conducting military operations for days as part of a crackdown on an uprising calling for an end to President Bashar Assad's regime.

Human rights groups say at least 35 people have been killed there since Saturday.

Ibrahim Shaar says "we will not be silent" about attacks against the state, comments that appeared to be a prelude to an even stronger government crackdown against a popular uprising that began in mid-March.

He spoke in a terse statement broadcast on Syrian state television Monday after government reports that 80 policemen and security forces were killed in an ambush and confrontations with armed men in a tense northern town.

The reports said the armed groups in Jisr al-Shughour attacked a security post and set fire to government buildings.