42 million displaced by natural disasters in 2010 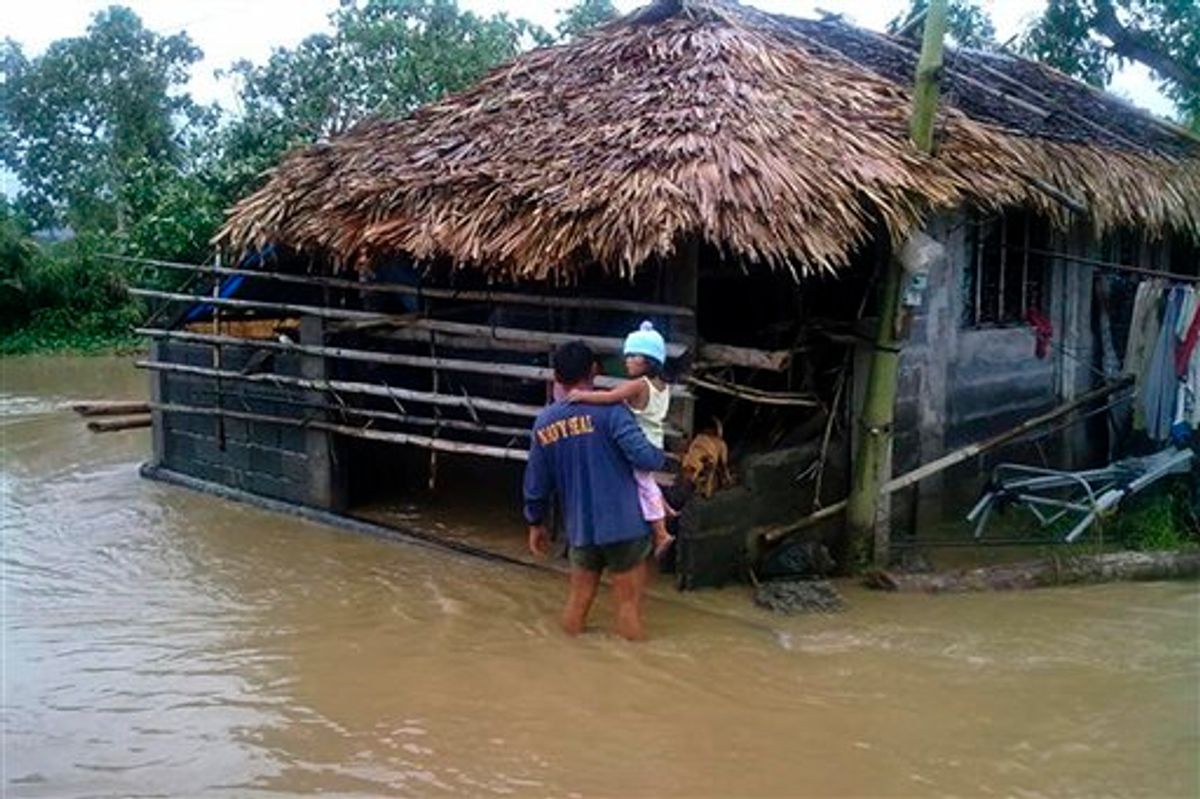 In this photo released by the Philippine Naval Forces Southern Luzon, a Disaster Response and Rescue Team member holds a child as they evacuate families at an area flooded by Tropical Storm Aere in Libon town, Albay province, eastern Philippines on Monday May 9, 2011. Disaster officials warned villagers in the Philippines' agricultural north to be on guard for landslides and flash floods Monday as Tropical Storm Aere carved a deadly path across the country. (AP Photo/Philippine Naval Forces Southern Luzon) NO SALES (AP)
--

About 42 million people were forced to flee their homes because of natural disasters around the world in 2010, more than double the number during the previous year, experts said Monday.

One reason for the increase in the figure could be climate change, and the international community should be doing more to contain it, the experts said.

The Internal Displacement Monitoring Centre said the increase from 17 million displaced people in 2009 was mainly due to the impact of "mega-disasters" such as the massive floods in China and Pakistan and the earthquakes in Chile and Haiti.

It said more than 90 percent of the disaster displacements were caused by weather-related hazards such as floods and storms that were probably impacted by global warming, but it couldn't say to what extent.

"The intensity and frequency of extreme weather events is increasing, and this trend is only set to continue. With all probability, the number of those affected and displaced will rise as human-induced climate change comes into full force," said Elisabeth Rasmusson, the secretary general of the Norwegian Refugee Council.

The monitoring center and refugee council presented the report at an international conference about climate change and displacement in Oslo.

The number of people displaced last year -- about 42 million -- is roughly the size of Argentina's entire population, and the onslaught of natural disasters so far this year also has been grim.

The March 11 earthquake and tsunami in Japan left more than 10,000 people dead, some 17,500 missing and about a half-million homeless.

In the United States, tornadoes have wreaked havoc from Alabama to Massachusetts, while floods have inundated states from Montana to Louisiana. In the southwest Missouri city of Joplin, the U.S.'s deadliest tornado in six decades killed at least 141 people and destroyed more than 8,000 homes in a city of about 50,000 people.

Speaking at the Oslo conference, U.N. High Commissioner for Refugees Antonio Guterres called the issue of climate-related displacement "the defining challenge of our times" and criticized the international community for lacking the political will to reduce to pace of climate change.

"There is increasing evidence to suggest that natural disasters are growing in frequency and intensity and that this is linked to the longer-term process of climate change," Guterres said.

Asia was the hardest hit region last year, with the largest number of displaced people seen in countries such as India, the Philippines, Bangladesh, Indonesia, China and Pakistan.

"This report provides us with evidence of the extent and urgency of the problem that we cannot ignore. We must increase collaborative efforts to prevent displacement by natural disasters, and do a better job of protecting those displaced," Rasmusson said.

Malin Rising in Stockholm contributed to this report.