Outbreak has so far killed 24 people and infected over 2,400 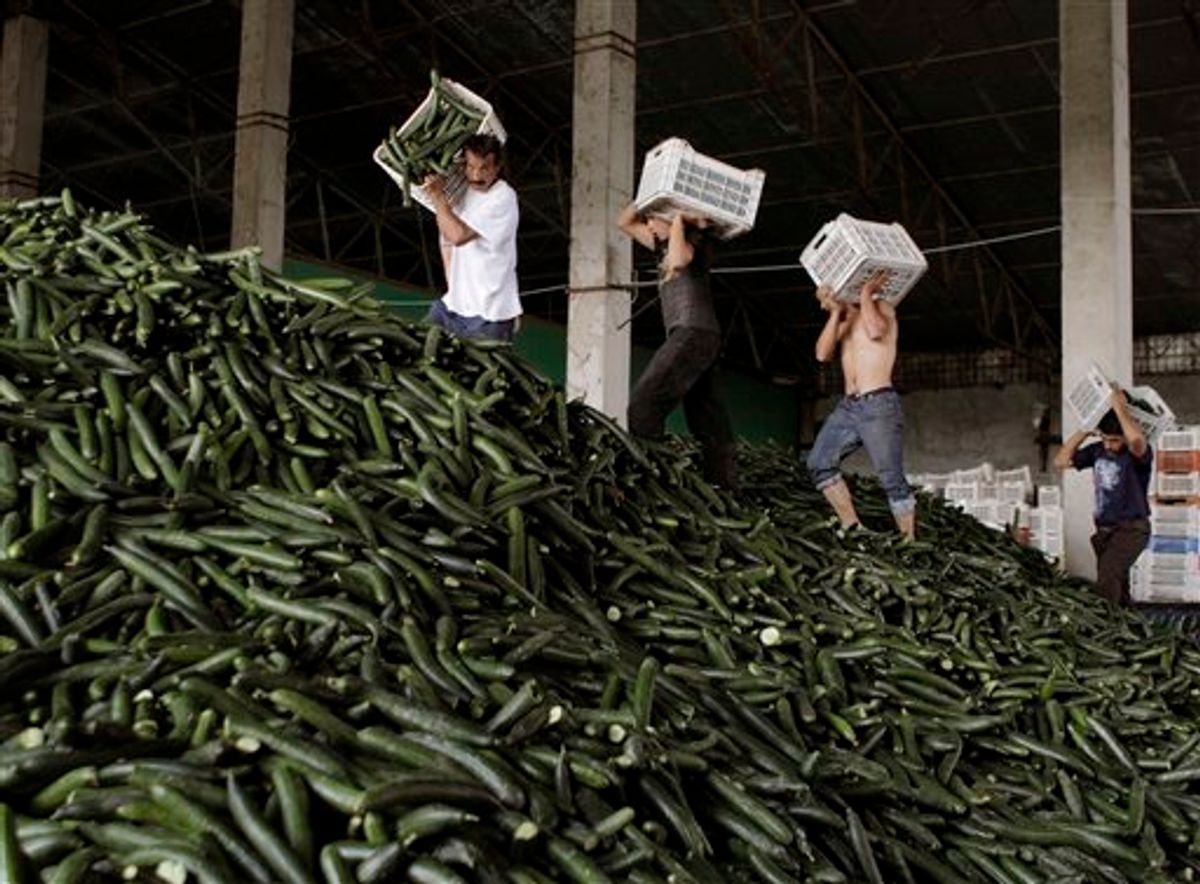 Men carry cucumbers collected for destruction at a greenhouse compound outside Bucharest, Romania, Monday, June 6, 2011. Producers destroyed thousands of tons of cucumbers over the past two days, according to local media, after their production was either turned back from exports or refused for sale by supermarkets in Romania for fear of E. coli bacteria contamination. The current crisis is the deadliest known E. coli outbreak, killing at least 22 people and sickening more than 2,300 across Europe. (AP Photo/Vadim Ghirda) (AP)
--

Farm Commissioner Dacian Ciolos said EU agriculture ministers were considering whether farmers can recoup from EU coffers up to 30 percent of the value of vegetables that cannot be sold because of the E. coli outbreak that has killed 24 people and infected over 2,400.

EU farmers outside northern Germany, where the crisis is located, have been livid that prices for their crops have plummeted after being erroneously blamed for the contamination crisis.

"We propose euro150 million. We will obviously see what we get," Ciolos said at a meeting Tuesday in Brussels.

The figure roughly translates to the 30 percent compensation, but EU nations were expected to haggle over the details for several hours. An agreement in principle on the aid was expected later in the day.

Spain and France, traditional vegetable producers, insisted it would not be enough. "No, Spain does not see it as sufficient," Spanish Agriculture Minister Rosa Aguilar said.

Aguilar said that Spain and a number of other countries had met and drawn up a document proposing a list be made of the products affected and farmers be given between 90 percent and 100 percent of the market price.

Since this was a farm meeting, there was no discussion of compensation for victims. EU farmers have a strong lobby, both in their home nations and in Brussels, and about 35 percent of the entire EU budget already flows to them in the form of subsidies and compensation payments.

The European farmers union COPA-COGECA painted a bleak picture when it compared vegetable prices this year to an average of the past five years. In a letter to EU leaders, the group said cucumber prices have fallen to 5 euro cents each from 21 cents, tomato prices have sunk from 60 cents to 13 cents a kilogram (2.2 pounds), and lettuce prices have plummeted from 70 cents to 5 cents.

The federation said vegetable farmers were experiencing "unprecedented economic losses running into several million euros per day." The crisis was being compounded by the fact that it was hitting just when many vegetables and fruits were ripe and ready for market.

EU health chief John Dalli earlier warned Germany against premature -- and inaccurate -- conclusions on the source of the contaminated food, which spread fear all over Europe and cost farmers millions in exports.

Dalli told the EU parliament in Strasbourg that information from health officials must be scientifically sound and foolproof before it becomes public.

"It is crucial that national authorities do not rush to give information on the source of infection that is not proven by bacteriological analysis, as this spreads unjustified fears (among) the population all over Europe and creates problems for our food producers," Dalli said.

Over the past days Germany first pointed a finger at Spanish cucumbers, then at local sprouts, before backtracking on both.

"Today is about (finding) a European solution It is a European problem," she said at the Brussels meeting.

Aigner also defended the country's warnings on Spanish cucumbers and bean sprouts from a German farm, saying both issues were suspicious enough to be alerted.

The EU has also been angry at Russia for banning all EU vegetable exports in the crisis, which is firmly centered in northern Germany. Over 2,350 of the victims so far are German.

Briefing reporters in Brussels, Russian Ambassador Vladimir Chizhov defended the ban and, laughing, linked the name of the bacterium with the 27-nation bloc.

"The problem is not with the Russian ban," Chizhov said. "The problem is with the -- well, I wouldn't like to say the EU. coli -- but the disease which has struck a dozen countries of the European Union."

He said the ban was imposed at first because Russian authorities received no information at all on the E. coli outbreak. Even now, he said, the data being given to Russia is mostly statistics rather than information about the cause of the disease.

In response to a question, he said that if the cause is never pinpointed but the region being hit by the outbreak was isolated, the import ban could be regionalized rather than applying to the entire EU.

He said he sympathized with European farmers who were losing money. But he added, "No material loss is comparable to the loss of human life."

An expert at the World Health Organization, meanwhile, said time was running out for German investigators to find the source of the outbreak.

"If we don't know the likely culprit in a week's time, we may never know the cause," Dr. Guenael Rodier, director of communicable diseases expert at WHO, told The Associated Press on Tuesday.

Germany's national disease control center, the Robert Koch Institute, on Tuesday raised the death toll to 24 and the number of infections in Germany to 2,325, with another 100 cases in 10 other European countries and the United States.

Juergen Baetz in Berlin, Don Melvin in Brussels and Nataliya Vasilyeva in Moscow contributed to this story.