Gadhafi vows to fight to the death 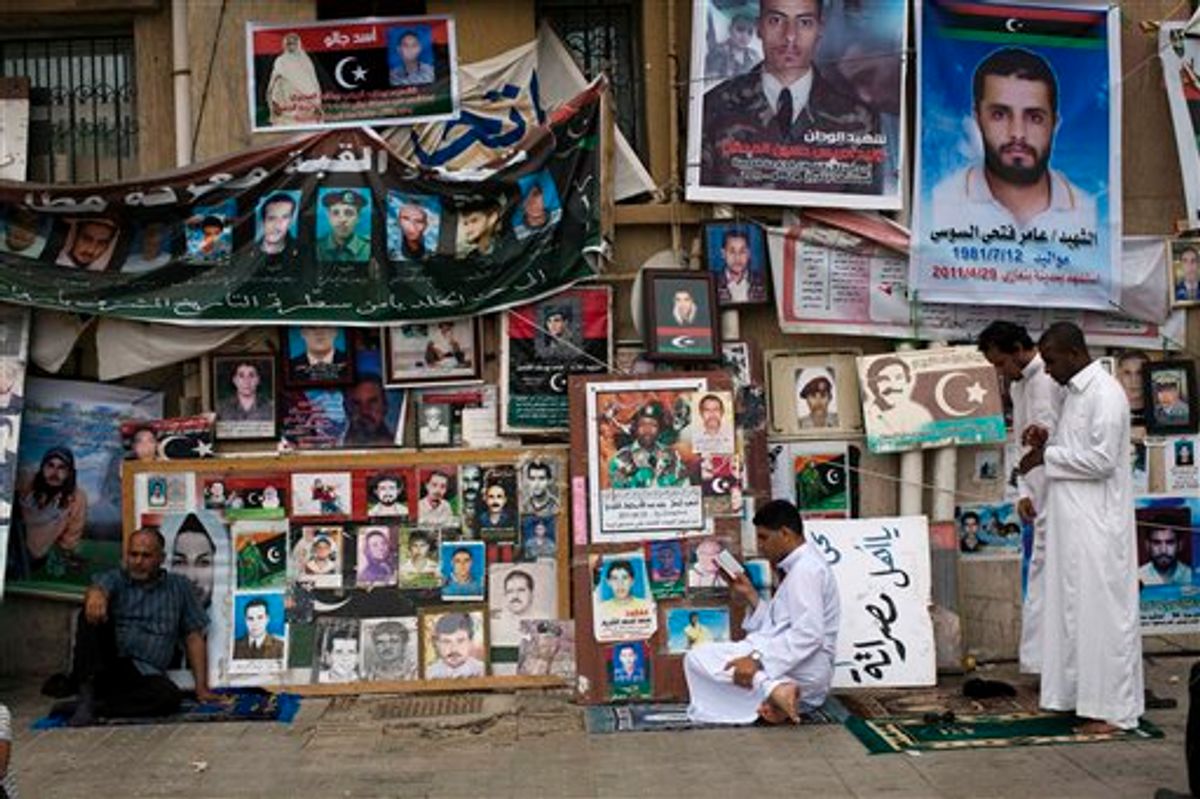 Men pray next to portraits of people killed or who disappeared during the rule of Libyan leader Moammar Gadhafi's regime during Friday prayers in Benghazi, Libya, June 3, 2011. (AP Photo/Rodrigo Abd) (AP)
--

Libyan ruler Moammar Gadhafi vowed to fight to the death in a defiant speech Tuesday after NATO military craft unleashed a ferocious series of some daytime airstrikes on Tripoli.

In a phone call to Libyan state television station, Gadhafi angrily denounced the rebels who rose up against him in mid-February, inspired by a wave of Arab uprisings.

As he spoke, the sound of low-flying military craft could be heard whooshing through Tripoli again, and Gadhafi quickly hung up.

Minutes later, five more explosions shook the capital as NATO apparently launched another round of strikes. Pro-Gadhafi loyalists also fired a round of gunfire into the air after his speech, which lasted about 10 minutes.

Gadhafi was last seen in television footage showing him sitting with visiting South African President Jacob Zuma in late May.

Several structures in the Gadhafi compound were badly damaged in Tuesday's strikes. Daylight NATO raids have been rare and signal an intensification of the alliance bid to drive Gadhafi from power.

At least one man was killed.

NATO officials have warned for days that they were increasing the scope and intensity of their two-month campaign to oust Gadhafi after more than 40 years in power. The alliance is assisting a four-month old rebel insurgency that has seized swaths of eastern Libya and pockets in the regime's stronghold in the west.

Ambulances, sirens blaring, could be heard racing through the city during the daylong raids that shook the ground and sent thundering sound waves across the capital. Some of the strikes targeted a military barracks near Gadhafi's sprawling central Tripoli compound, said spokesman Moussa Ibrahim. Others hit the compound itself.

Ibrahim told foreign reporters it was the heaviest day of shelling in the capital.

Gadhafi's phone call appeared to take state television by surprise and the sound was hastily adjusted to make it louder.

Gadhafi has mostly been in hiding since NATO strikes in April targeted one of his homes. Libyan officials said one of his sons, Saif al-Arab, and three of his grandchildren were killed.

The strikes began at around 11:30 a.m. local time and continued through the day. Some landed in clusters of two and three booming explosions.

Ibrahim said the barracks likely hit Tuesday have been repeated targets of NATO. Reporters saw that other strikes smashed and destroyed buildings inside the Gadhafi compound. They also saw the body of one man under the rubble.

"Instead of talking to us, they are bombing us. They are going mad. They are losing their heads," Ibrahim said.

The spokesman said the daylight strikes were particularly terrifying because families were separated during the day. Libyan children are taking final exams at the end of the school year.

NATO strikes before dawn Monday targeted a building of the state-run Libyan television station, he said, reporting that 16 people were injured. The building was only partially destroyed and Libyan television is still broadcasting.

As NATO intensifies air attacks on Tripoli, there appears to be renewed diplomatic efforts to find a peaceful end to the civil war.

A U.N. envoy was expected in the country Tuesday. Ibrahim would not say who envoy Abdul-Elah al-Khatib would meet, or how long he would stay.

So far diplomacy has failed, given that rebels are demanding Gadhafi leave power. The dictator steadfastly refuses to cede power.

Also Tuesday, Tripoli dispatched Foreign Minister Abdul-Ati al-Obeidi to Beijing for a three days of talks, an apparent effort to restore some of Libyan government influence and defuse a setback delivered by China last week. Chinese officials announced on Friday that they had reached out to the rebel forces challenging Gadhafi, a significant effort to boost Chinese engagement in the Libya conflict and possibly jostle for a mediator role.

Beijing had stayed on the sidelines for the first few months since the revolt against Gadhafi's government erupted in mid-February, pointedly avoiding joining international calls for Gadhafi to step down and saying that is for the Libyan people to decide. China also abstained in the U.N. Security Council vote authorizing the use of force against Libyan government loyalists and has repeatedly criticized the NATO bombing campaign in support of the rebels.

But last week, Beijing said the head of Libya's rebel council met with China's ambassador to Qatar in Doha, in what was the first known contact between the two sides. China's decision to engage the rebels was a diplomatic setback for Gadhafi.

Chinese Foreign Ministry spokesman Hong Lei told reporters at a regular briefing Tuesday that talks with al-Obeidi would focus on the need for a political solution to the Libyan crisis.

He also reiterated China's appeals for an immediate cease-fire and called on all parties to "fully consider the mediation proposals put forward by the international community so as to defuse the tensions as soon as possible."

In Benghazi on Tuesday, a Russian delegation met with the rebel's National Transitional Council, which controls the city and Eastern Libya.

Special representative for Africa Mikhail Margelov said that Gadhafi had lost his legitimacy but that NATO airstrikes were not a solution to the stalemate in Libya.

"As long as bloodshed continues the more difficult it will be to build a national reconciliation process after the civil war," Margelov told reporters Tuesday.

Margelov left Benghazi for Cairo, the Interfax news agency reported, adding that the rebels said they supported Russia's mediation with Tripoli. The envoy did not, however, have plans to go to Tripoli.

Russia, along with China, abstained in the U.N. Security Council vote authorizing the use of force against Libyan government loyalists and has repeatedly criticized the NATO bombing campaign in support of the rebels.

The revolt against Gadhafi followed popular uprisings that overturned the longtime rulers of Tunisia and Egypt. A coalition of rebels seized control of much of eastern Libya and set up an administration based in the eastern city of Benghazi. As the conflict escalated, it grew beyond an insurrection by a small group and has now evolved into a civil war. The rebels, led by the National Transitional Council, are well in control of nearly a third of the inhabitable part of Libya the country.

Associated Press Writer Hadeel Al-Shalchi in Benghazi and Gillian Wong in Beijing contributed to this report.