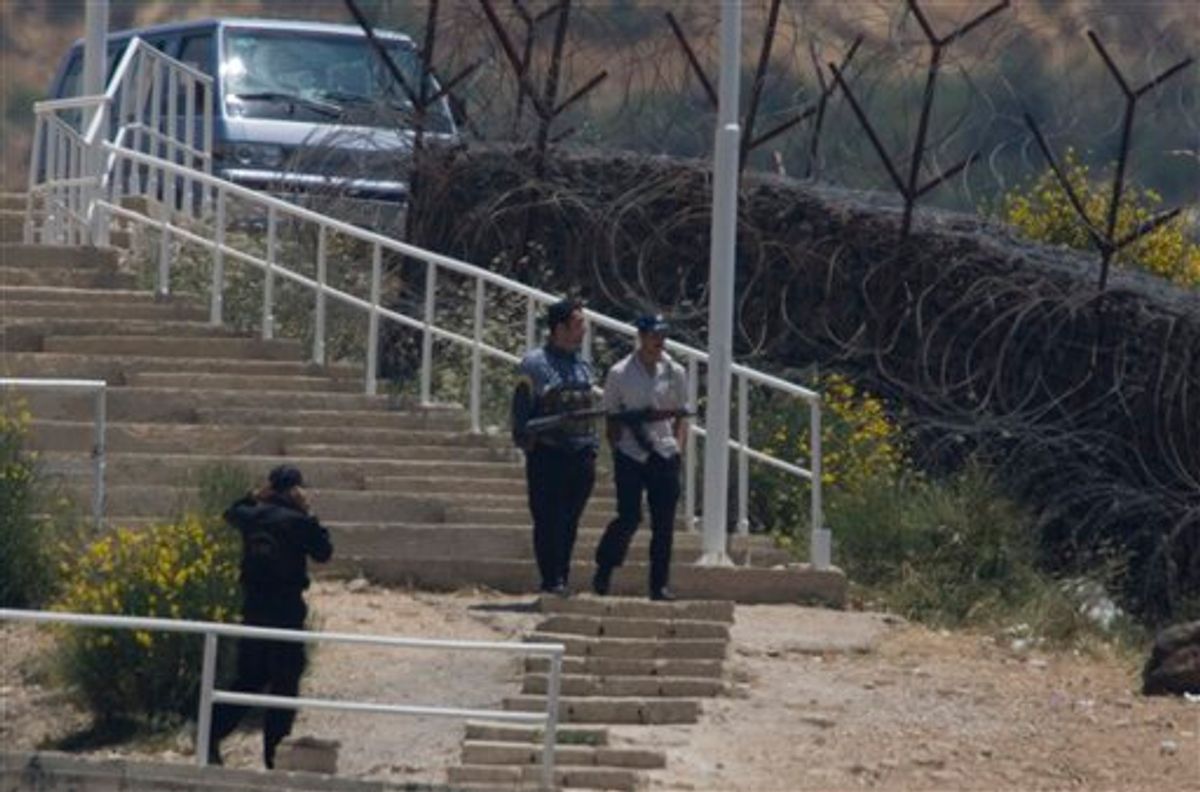 Seen from Majdal Shams, an armed Syrian security officer on a hill over looking Majdal Shams near the border between Syria and Israel in the Golan Heights early Monday, June 6, 2011. Syrian police blocked dozens of pro-Palestinian protesters from approaching the Israeli frontier on Monday. The toll of demonstrators killed trying to break through into the Israeli-controlled Golan Heights rose to 23. Syrian police set up a pair of checkpoints, including one a half-mile (kilometer) from the border. Nearly 20 protesters, some waving Syrian flags, began walking down a hill leading to the border when two police officers blocked their advance by extending their arms. (AP Photo/Ariel Schalit) (AP)
--

The government has vowed to respond "decisively" to the violence in Jisr al-Shughour, and a resident reached by The Associated Press Tuesday said people in the tense area had been fleeing for days.

"People were struck by fear and panic after the government statements last night, it's clear they are preparing for a major massacre," he said.

Jisr al-Shughour has been the latest focus of Syria's military, whose nationwide crackdown on the revolt against President Bashar Assad has left more than 1,300 Syrians dead, activists say. The town was a stronghold of the country's banned Muslim Brotherhood in the 1980s. Human rights groups said at least 42 civilians have been killed there since Saturday.

Syria's government said "armed gangs" killed 120 security forces in an ambush but did not explain how the heavily armed military could suffer such an enormous loss of life. Communications to the area are spotty, foreign journalists have been expelled, and many people reached by phone are too afraid to talk.

The resident, who spoke on condition of anonymity for fear of reprisals, said 80 percent of the residents fled, many of them to villages along the border with Turkey about 12 miles (20 kilometers) away.

Some activists, including the one in Jisr al-Shughour, said there was a mutiny, with a few soldiers switching sides and defending themselves against attacking security forces. Other reports said many Syrians took up arms to defend themselves.

A resident of the area who spoke from a nearby village where he fled days ago scoffed at reports of armed resistance.

"Since the 80s, residents of Jisr al-Shughour are banned from possessing any kind of weapons, even a hunting rifle," he said. "So how can there be armed resistance?"

A prominent activist outside Syria with connections to the area said many Syrians had taken to carrying weapons in response to the killings of protesters. But he said clashes over the past few days were mainly between supporters of the Muslim Brotherhood and Syrian security forces.

He said the weapons were smuggled from Turkey.

"The area is effectively outside the control of Syrian security forces now," he said.

Turkish authorities said Tuesday 35 Syrians wounded in the clashes were being treated at Turkish hospitals after crossing the border from Jisr al-Shughour.

The Turkish Foreign Ministry said 224 Syrians were sheltering at a camp near the border and authorities were taking measures in case of a major influx of refugees.

Syria's government has a history of violent retaliation against dissent, including a three-week bombing campaign against the city of Hama that crushed an uprising there in 1982. Jisr al-Shughour itself came under government shelling in 1980, with a reported 70 people killed.

Reports on the weekend clash from northern Syria were sketchy and contradictory.