How Anthony Weiner should've handled this

The Sarah Palin way, of course 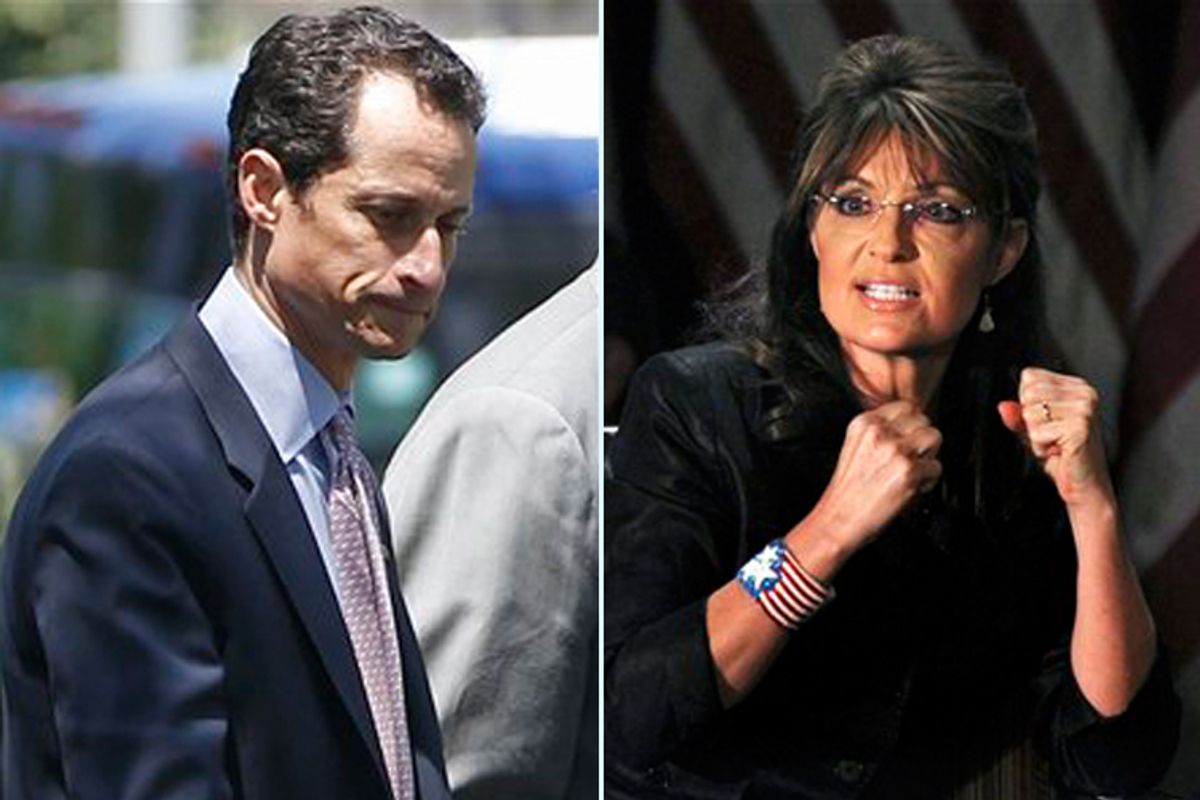 Before Memorial Day weekend, Anthony Weiner was one of the Democratic Party's better cable news messengers, a largely beloved figure among the "netroots," and the likely next mayor of New York City. Now, he is a national punch line. Where did he go wrong? Sending dirty pictures to a half-dozen women he didn't know in real life is the easy answer to that question. Where he really messed up was in handling the bad press that resulted from sending dirty pictures of himself to a half-dozen women.

How should he have reacted? Fessed up early on and deprived the story of oxygen before it became a day-long roll-out of beefcake photos on a right-wing website? Maybe. But he also could've just acted like the most successful pseudo-candidate in the nation: Sarah Palin. Here's the Palin guide to handling a P.R. crisis.

Just blatantly, unreservedly say whatever you can think of, as soon as you think of it, without really caring what the actual "facts" at hand are. People will eventually point out that you are just making things up, but that could take hours. The American people will have moved on by then!

Robust fact-checks take time, and they're usually only published in fusty old "newspapers." The kids today get their news from Twitter, where there is only room to print the initial quote!

Weiner should've said, last week, that the underwear shot was actually a picture of the "hacker," he should've accused a political enemy of being the hacker, and then he should've said that he doesn't even own a single pair of underwear, at all, so it couldn't have been him.

Once people catch on that you're just making stuff up, they may attempt to call you on it. Now is your chance to just say that whatever you said before was actually totally right, and then make up a new thing that you insist is the same thing that you said before. Be completely shameless about this, because the traditional political media is simply not built to handle a person who feels no shame.

Like, for example, if everyone in the nation is laughing at you for messing up the very well-known children's story of Paul Revere's ride, claim that you didn't mess it up and then mess it up even more.

Or, if you're Anthony Weiner, announce that everything you said about the hacker was true, even though there was no hacker, because he was actually a plant on your staff, trying to embarrass you. And also the picture is you but you meant to send it to your wife, but the hacker made you hit the wrong button on your BlackBerry. And you don't have a BlackBerry.

Take the dumbest, most venal people in the press and online attacking you and conflate them with the perfectly respectable ones asking reasonable questions. Claim every journalist in the nation is personally biased against you. If you botch or refuse to answer a legitimate question, say it was a "GOTCHA."

Declare war on the very media that sustain you as a national figure. They're used to it! Say everyone is lying about you but don't go into specifics.

Weiner obviously had a great opportunity here to go after Andrew Breitbart, a known liar and enemy of liberals everywhere. He could've blamed this on Breitbart, on Glenn Beck, on Roger Ailes and Rupert Murdoch, maybe on the Kochs somehow, anyone but himself. He could've claimed that the non-right-wing journalists asking questions were shamefully taking their cues from the right-wing noise machine. He could've said Andrew Breitbart and Rupert Murdoch got together to make this up because they had to destroy him. Who cares if that's crazy, it would've distracted people for a while!

If the press availabilities get too embarrassing, just stop doing them. Only answer questions from friends. Release statements directly via Facebook and never talk to a gaggle of real reporters. Have a communications staff that barely functions, too.

If it's hard to act like that while holding public office, quit your job! You weren't really doing much with it, anyway!

Have an army of sycophants who worship you

This is maybe the most important part! Weiner had a lot of fans, yes. But he seems to have used his many admirers more for ... private gratification than for cowing those who dared speak ill of him.

If you have thousands of people who believe you to be America's savior, and think every word you speak is true, you can do a lot more than just find sexting pals! You can get journalists to bend over backward to seem extra "fair" to you, because they don't want to deal with the hassle of getting hundreds of emails and phone calls from your fans. You can have Wikipedia edited to (briefly) reflect your interpretation of reality. You can get seemingly serious pundits and columnists to mount really bizarre defenses of indefensible things you say and do because you're on the "team" and defending you is part of the price of admission.

Sadly, Weiner just sort of evaded questions for a week and then admitted to everything, which is the coward's way out. He'll never eat pizza with Donald Trump in this town again.