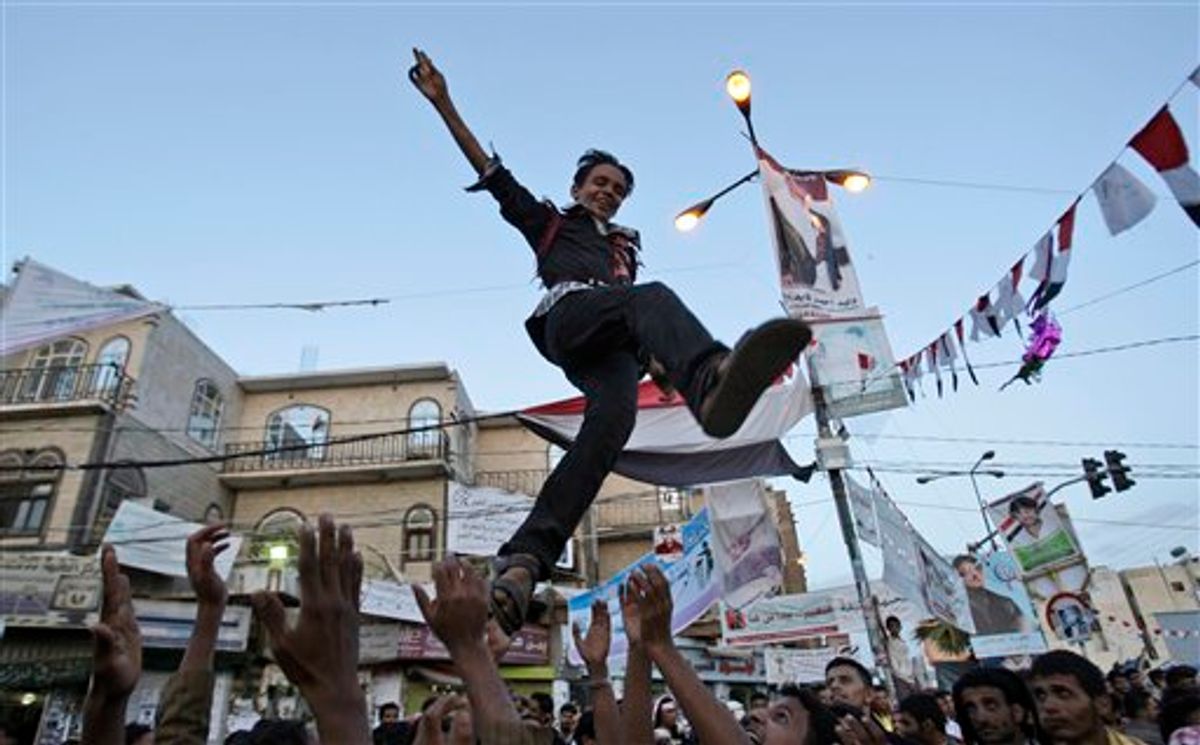 Anit-government protestors reach to catch a youth, after throwing him in to the air while celebrating President Ali Abdullah Saleh's departure to Saudi Arabia, in Sanaa, Yemen, Monday, June 6, 2011. A cease-fire in Yemen's capital was at risk of unraveling Monday as regime supporters opened fire on opposition fighters in renewed clashes that killed at least six. The violence raises fears over the potentially explosive situation after the wounded President Ali Abdullah Saleh left the country, creating a deep power vacuum. (AP Photo/Hani Mohammedi) (AP)
--

Obama administration officials said Tuesday that Yemeni President Ali Abdullah Saleh was more badly injured than thought in a blast at his compound last week, complicating the U.S. response to increased instability in a key battleground in the war against al-Qaida.

Saleh is receiving treatment in Saudi Arabia for burns covering some 40 percent of his body, three U.S. officials said. Yemen's leader also is suffering from bleeding inside his skull, the officials said on condition of anonymity because of the sensitivity of the situation.

One current and one former U.S. official also said Saleh had additional, significant injuries to his upper body. Those officials, speaking on condition of anonymity to discuss intelligence matters, said U.S. officials think the injuries were caused by a bomb planted inside his compound in the Yemeni capital, not a rocket attack from outside the compound walls. That conflicts with initial reports of the attack.

Also Tuesday, The Pentagon confirmed that the U.S. military has ceased its training of Yemeni forces.

Col. Dave Lapan, a Pentagon spokesman, said the training is now "in abeyance" but the U.S hopes it will be able to resume the program. He declined to say exactly how many U.S. military personnel are now in Yemen, including the number of special operations trainers, which has fluctuated over time. U.S. officials, however, have suggested the number of trainers has been close to 80.

The developments Tuesday fueled fears about the deepening unrest in a nation that has been a launching pad for attacks against the U.S. by the Yemen-based al-Qaida in the Arabian Peninsula. Those include the foiled Christmas Day 2009 bombing of an airliner over Detroit and explosives found in parcels intercepted last year in Dubai and Britain.

The United States initially believed that Saleh escaped the Friday attack unscathed, though officials later amended their assessment to say he had suffered slight wounds.

Saleh underwent surgery on Monday to remove shards of wood from his chest and treat heavy burns on his face and chest from the attack, which killed 11 bodyguards and seriously wounded five other senior officials.

It is not known when the leader of 33 years planned to return to Yemen, but a top official said he would return home within days. The United States opposes his return.

A return by Saleh would likely spark new, intensified fighting between his forces and opposition tribesmen determined to topple him. Both sides' fighters are deployed in the streets of the capital, and a cease-fire brokered by Saudi Arabia only a day earlier was already starting to fray, with clashes killing at least six over the past 24 hours.

The information on his condition was circulating in Washington as the U.S. continued to press him to step down, so that a transition process can end months of political unrest. The U.S. also fears the dangerous al-Qaida in the Arabian Peninsula offshoot could take advantage of the chaos to expand its power.

On Monday, Secretary of State Hillary Rodham Clinton called for an "immediate transition" in Yemen. She said the country needs a process that "everyone knows is going to lead to the sort of economic and political reforms that they are seeking."

Government forces have killed 30 Islamic militants in Yemen's troubled southern province of Abyan, the defense ministry said Tuesday, in what appears to be an escalation of a military campaign to retake areas captured by extremists.

The violence underscores fears of increasing instability in the Arab world's most impoverished country.

Warplanes bombed areas around the town of Zinjibar, which was seized by Islamic militants late last month, overnight, according to witnesses and military officials.

Fighting also occurred on the ground when dozens of militants attacked an army position in Abyan, prompting a gunfight that left nine soldiers and six of the attackers dead, according to the military officials, who spoke on condition of anonymity because they weren't authorized to release the information. The army had regained control of the post after hours of fighting.

A brief defense ministry statement said 30 Islamic militants were killed Monday night and Tuesday, but did not provide a breakdown or give more details about the fighting.

An attack on the presidential palace in Taiz on Sunday was blamed on a group recently set up to avenge the killing of anti-regime protesters at the hands of security forces. It was not immediately clear whether the same group was behind Tuesday's attack.