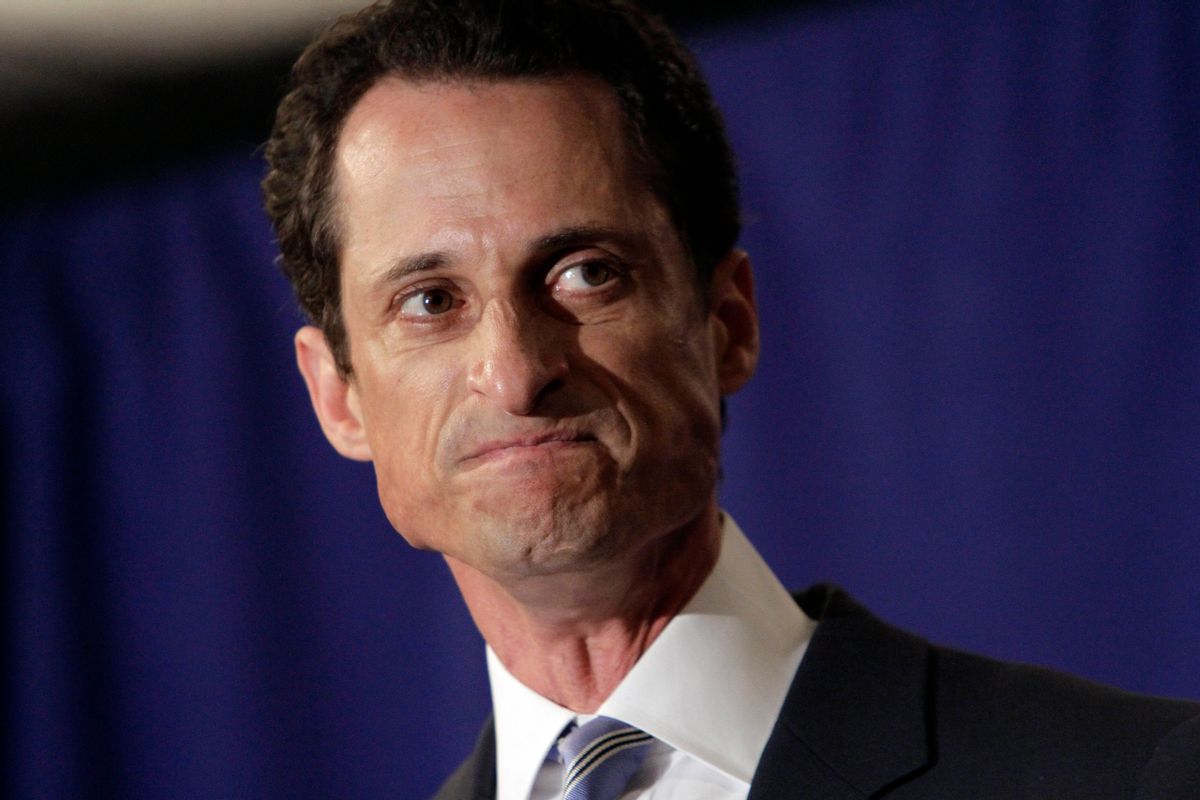 U.S. Congressman Anthony Weiner, D-NY, addresses a news conference in New York, Monday, June 6, 2011. After days of denials, a choked-up New York Democratic Rep. Anthony Weiner confessed Monday that he tweeted a bulging-underpants photo of himself to a young woman and admitted to "inappropriate" exchanges with six women before and after getting married. (AP Photo/Richard Drew) (Richard Drew)
--

In the wake of Anthony Weiner’s unprecedented press conference Monday, most commentary is focusing on what is almost undoubtedly the end of his quest to be New York’s mayor and his possible fate before the House Ethics Committee.

But when it comes to his political future, Weiner has a more immediate problem: He could find himself without a congressional district next year.

Because of stagnant population growth in the most recent census, New York will lose two of its 29 seats in the House of Representatives through the reapportionment process that will precede the 2012 elections. For some time, Democrats in Albany had planned to draw favorable new lines that eliminated exclusively GOP seats, but their narrow loss of the state Senate last November scuttled plans for a harsh gerrymander. Consequently, it is a near-certainty that the final map will eliminate one Democratic and Republican seat.

While there are theoretically 20 Democratic seats to choose from, legal and geographic considerations severely limit the number that might actually be targeted, and Weiner‘s Brooklyn/Queens-based 9th District is among the few that could be at risk.

For instance, four of the seven Republican-held seats are upstate, all of them captured from Democrats last year, and the lost GOP seat will almost certainly come from this group. The only GOP seat in New York City, anchored around Staten Island, would be difficult to divide, and would anger too many powerful interests in the borough. This is bad news for Democrats like Weiner because, given the dire economic straits of the region, state legislators are unlikely to allow both axed seats to come from the upstate area. The Democratic seat will be slashed from downstate.

Cutting a seat on Long Island would be more difficult because of the complexities that would be involved in shifting lines west, thereby insulating Southampton’s Tim Bishop and Huntington’s Steve Israel. Plus, because the Voting Rights Act protects the autonomy of minority seats, House members like Charlie Rangel, Ed Towns, Jose Serrano, and Yvette Clarke essentially have immunity from elimination. Realistically, this means the eliminated district will probably be one of the majority-white districts based in the city.

The smart money has generally been on members like Gary Ackerman, whose district is based in Queens and stretches into parts of Long Island, and Manhattan’s Carolyn Maloney to lose this game of musical chairs. Both are well into their 60s and are seen as being in the twilight of their careers. 64-year-old Eliot Engel, whose district reaches from the Bronx to suburban Rockland County, is another potential target.

But Weiner’s embarrassing scandal changes this calculus and puts the biggest target squarely on his back.

For one thing, Weiner’s district would be very easy to carve up. Occupying narrow swath of Brooklyn (Midwood, Marine Park, and Sheepshead Bay) and Queens (Forest Hills, Kew Gardens, and Howard Beach), it could be broken up and dispersed among his Democratic neighbors in short order.

Politically, this would make a great deal of sense. Weiner’s district clocks in at D+5 in the Cook Partisan Index (a commonly cited measure of a district’s partisan tendencies in relation to the average national vote share of the party’s two previous presidential nominees), which actually makes it the city’s second least Democratic district (after the Staten Island-based 13th District, which is now held by a Republican. Moreover, Weiner’s district is actually trending away from his party. No district in the nation swung more from Democrat to Republican between 2000 and 2004 -- a whopping 25 percent in the wake of 9/11 -- and Barack Obama actually did worse in there than John Kerry. Given his problems, it’s not inconceivable that Republicans could wage a serious campaign against Weiner next year, providing a clear incentive for Democrats to dismantle his district.

But more important, Democrats in Albany and in Washington may now have the excuse they‘ve been looking for to rid themselves of Weiner, who has always been a lone wolf and is not particularly close to his fellow New York delegation members. His aggressiveness and political savvy (at least before this past week) have made him a well-known figure in Washington and a frequent talking head on the national cable circuit, but that stardom irritated his colleagues.

This could now come back to haunt Weiner. After all, in redistricting, as any congressman knows, it’s everyone for himself (or herself). Folks like Ackerman, Maloney, and Engel, who have faced speculation on the loss of their own careers in the last few months, will have no compunction turning on Weiner now, especially if it will guarantee the preservation of their own seats.

If Weiner’s seat is chopped off, his plight would have fascinating parallels to that of Steve Solarz, the late Brooklyn congressman whose seat was eliminated after the 1991 census. While Solarz was not tripped up by scandal, he had (like Weiner) become a well-known Democrat nationally, stoking the ire of some of his Empire State colleagues, who had no qualms about eliminating his seat. Solarz tried to run in a newly created district, but fell short in the Democratic primary to Nydia Velazquez, who has been in Congress ever since.

If the same fate befalls Weiner, he’ll have his own brash personality to blame. It would be a sad end for a once-promising and completely self-made career.