Oh no, Bachmann and Palin are fighting 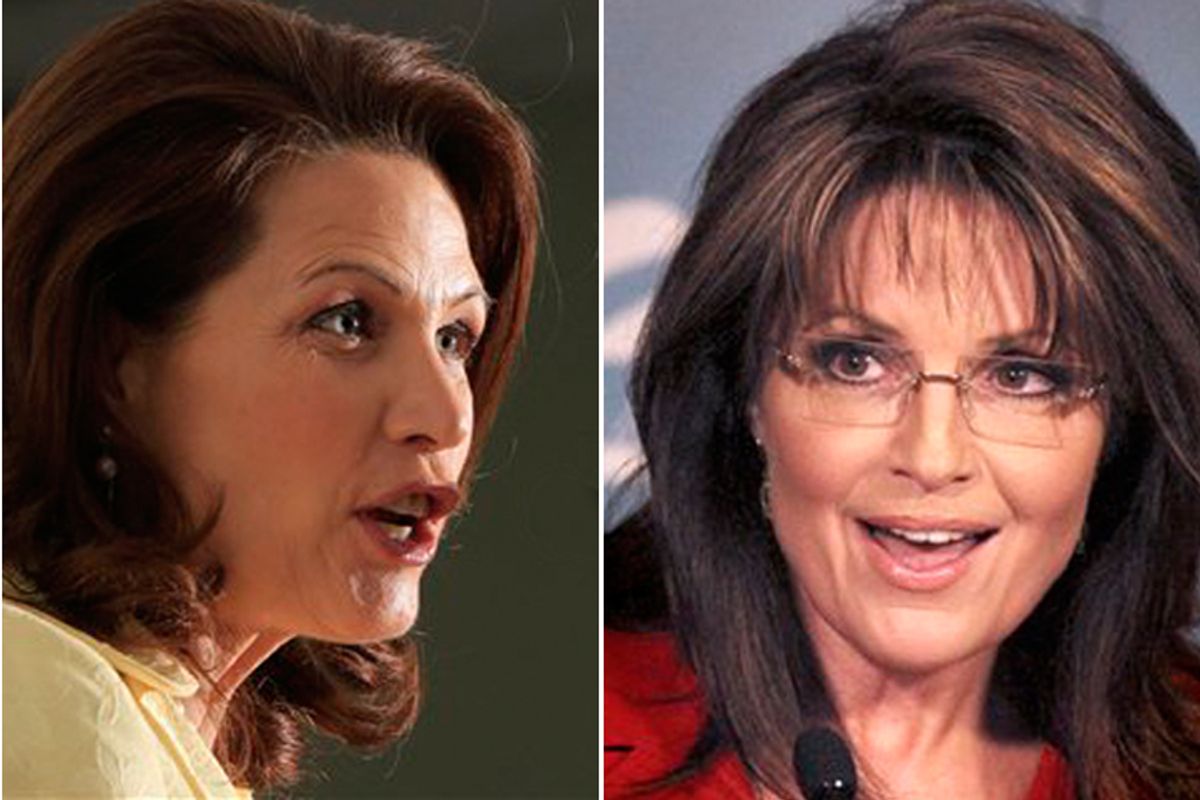 Poor Michele Bachmann! She'd been working the divisive culture warrior routine for years, to great success, when suddenly John McCain transforms a low-profile Alaska governor into the Queen of the Tea Parties. It's enough to make anyone resentful. So it's not too surprising that the Bachmann presidential campaign has begun its war with the Sarah Palin pseudo-campaign.

We live in a society that expects and sometimes demands that ambitious women battle each other for the limited number of slots available to them at the top of power structures, so the story of Bachmann "taking on" Palin would've been inevitable even if Bachmann strategist Ed Rollins hadn't begun directly drawing contrasts between the two. (Yes, we also live in a society where Ed Rollins is working to get Michele Bachmann elected president and we just have to deal with that.)

The problem is, as Steve Kornacki explained, Bachmann's campaign began gearing up when it looked like there was no chance of Palin entering the race. But Palin's riding a bus across the country now for some reason, so Bachmann's people need to make sure she remains a pseudo-candidate.

First, Rollins accused Palin of being unserious on talk radio yesterday, and he pointed out that Palin quit her job, while Bachmann is still an elected official. In an interview with Politico's Ben Smith, Rollins laid out the Bachmann campaign's official anti-Palin message: Bachmann is smarter than Palin but just as adorable:

Bachmann will "be so much more substantive," Rollins said. "People are going to say, 'I gotta make a choice and go with the intelligent woman who’s every bit as attractive.'" (See also: Sarah Palin, Michele Bachmann size each other up)

"I’m not afraid of Palin," he said, adding the strategy would have been the same for Mike Huckabee. (See also: Ed Rollins hops on Michele Bachmann bandwagon)

Hah, so the strategy would've been to say that Michele Bachmann is "every bit as attractive" as ... Mike Huckabee? That seems wrong, Ed Rollins.

The fun stuff in the story is that when Palin and Bachmann made their joint appearance in 2010, in support of Bachmann's reelection effort, there were "tensions over logistics," which usually means that Palin is an unreliable flake. Palin the unreliable flake has also "expressed 'disdain' for the congresswoman," which is unsurprising, because Palin disdains everyone. But Bachmann "has the same warm words for Palin in private as in public," which is nice.

The disdain probably explains why Bachmann's team is going after Palin instead of courting her support -- they know Palin probably thinks of Bachmann as a coattail-riding second-rate imitation. But Palin should show some respect: Bachmann practically invented acting horrible all the time and only getting more famous and beloved for it.