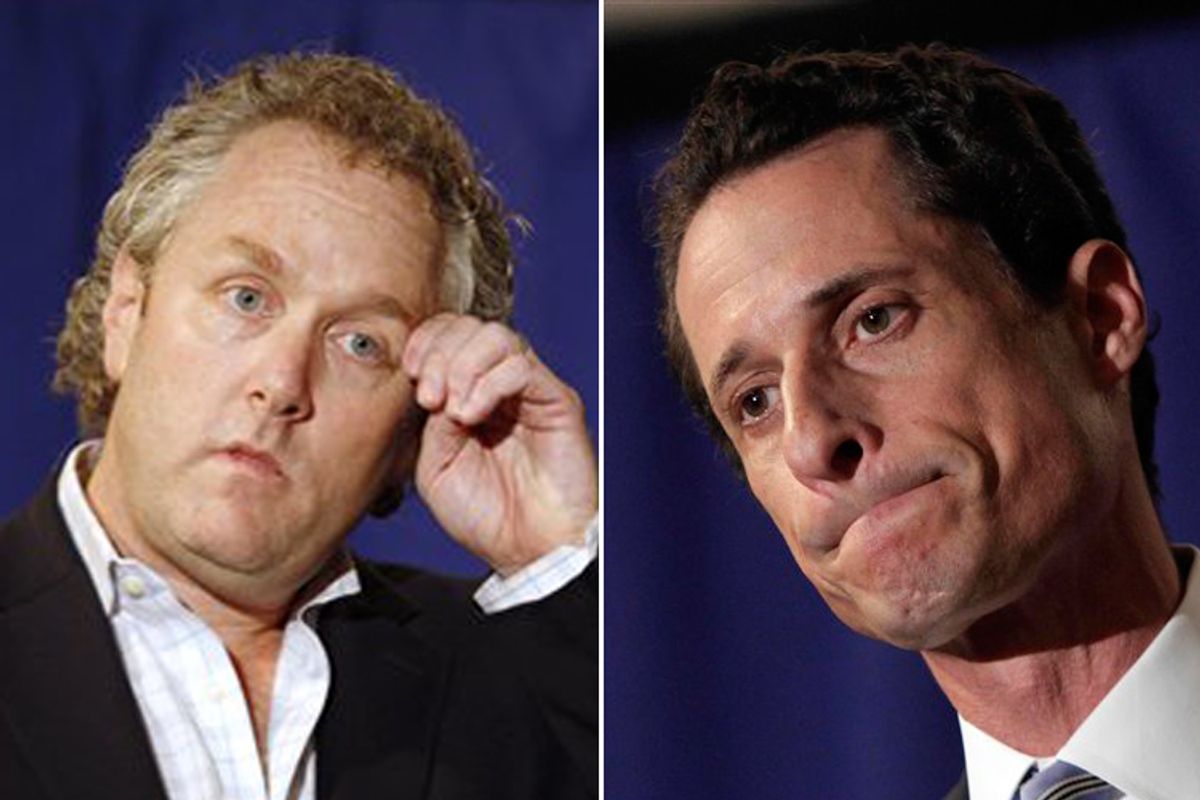 (UPDATED) A pair of radio shock jocks are claiming that Andrew Breitbart showed them a picture of Rep. Anthony Weiner's weiner -- and they have now circulated the image on the Web. But it's not clear at this point whether the image is authentic.

Remember, at the press conference on Monday where Weiner admitted to sending lewd images to women he met on the Internet, Breitbart also appeared and claimed that he had an "X-rated" image of Weiner -- presumably sent to one of the women -- but that out of a sense of responsibility he would not be releasing it.

But Breitbart appeared today on the Opie & Anthony radio show. And, according to the hosts, he showed them that very X-rated picture on his phone. The hosts say they captured video of Breitbart's phone while the image was on its screen, which (Not Safe For Work) you can see here and here. The radio show's Twitter feed promptly sent screengrabs from that video out to the world. According to Opie's tweets, this is what happened:

We had @ AndrewBreitbart on the show today and we prodded him to see the "pic" that was rumored to be out there. He finally passed his phone around to show a pic of @repweiner 's well "weiner". I believe it was not @AndrewBreitbart 's intention to get the pic out there at this time. As the phone made the rounds around the room to @jimnorton @anthonycumia and myself the picture was captured by a video camera that was on! I did try to take a pic of @AndrewBreitbart 's phone but it came out blurry because @anthonycumia grabbed the phone. Wasn't until @AndrewBreitbart left the studio that we realized what was captured on our video camera. #weinersweiner

It should be noted here that Breitbart has not yet commented on all this and that Opie and Anthony have previously been involved in some epic hoaxes (e.g., falsely reporting the mayor of Boston was dead).

I briefly reached Breitbart on the phone but he said he was on the other line and ended the call before I could get a question out. He has not responded to an email or answered subsequent calls. We do know that Breitbart was carrying his BlackBerry at the show, as this image shows.

At the press conference on Monday, Breitbart portrayed himself as a restrained and responsible newsman.

"I'm doing this to save his family," he said, explaining why he would not release the X-rated photo. "And if this guy wants to start fighting with me again, I have this photo. I'm not doing this for nefarious purposes, I'd like an apology from him. "

UPDATE: And now Breitbart releases a statement offering his version of what happened and expressing "regret":

Earlier today, a photograph resembling one that I had withheld from publication in the Weinergate saga was released without my knowledge or permission.

Prior to the publication of our story on BigGovernment.com and BigJournalism.com this past Monday morning, it was necessary to show the pictures I had received from our source to several news producers, including several at major news networks, to prove that the additional material I described really did exist, which some have continued to doubt.

This morning, I showed a photograph, which our source claims Weiner sent her, to radio hosts “Opie and Anthony” of the Sirius XM radio network on my mobile device. Somehow, without my knowledge or permission, apparently a picture was taken of my mobile device, and subsequently published by Opie (Gregg Hughes) on Twitter.

“In regards to the photo of Anthony Weiner that was leaked by members of The Opie And Anthony show on 6/8, I want to make it clear that Andrew Breitbart had no knowledge that this photo was being made public. A phone with the photo was being displayed and a camera in the studio caught it. It was then uploaded to twitter [sic], again, without Andrew Breitbarts [sic] knowledge.”

I regret that this occurred.