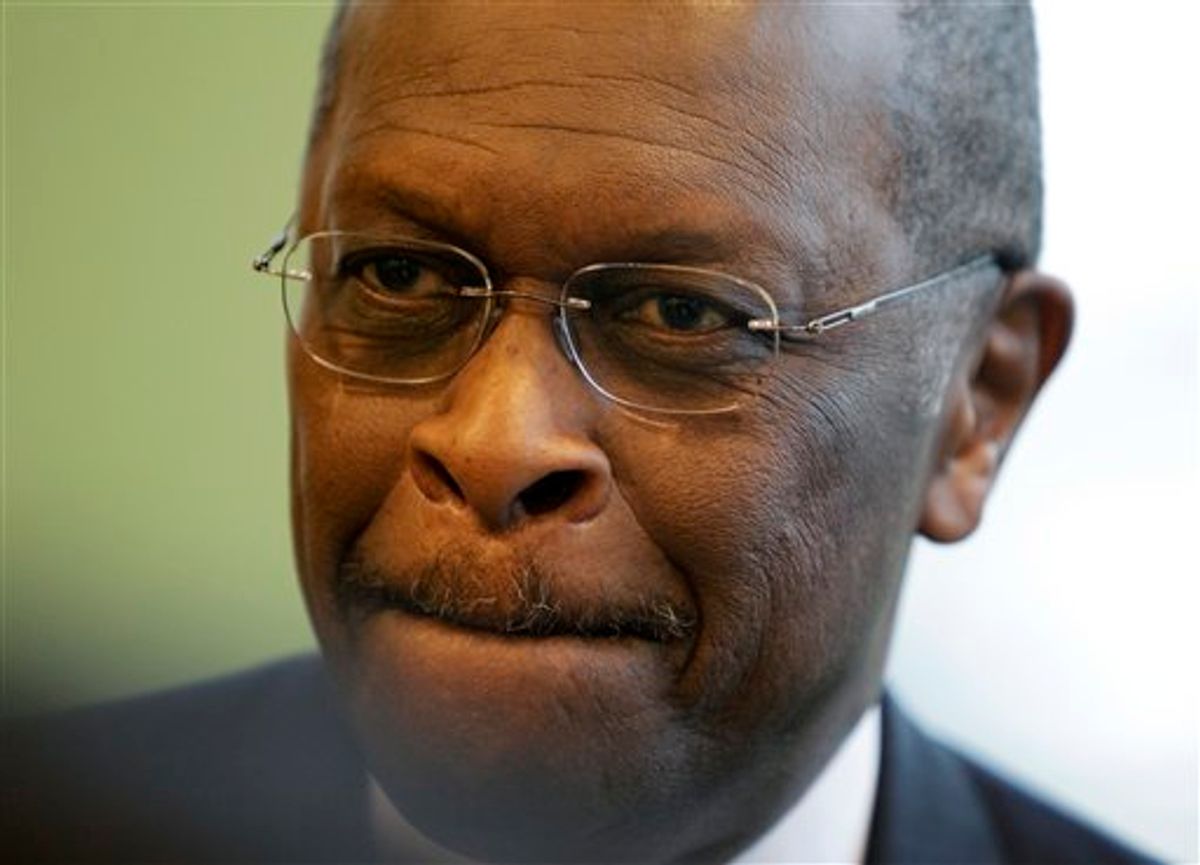 FILE - Former CEO of Godfather's Pizza Herman Cain is seen at the Iowa Faith and Freedom Coalition, in this March 7, 2011 file photo taken at the Point of Grace Church in Waukee, Iowa. The 65-year-old Cain will try to see if he can use grass-roots enthusiasm to turn a long-shot presidential campaign into a realistic bid. He plans to announce his candidacy at a rally in Atlanta on Saturday May 21, 2011. (AP Photo/Charlie Neibergall, File) (AP)
--

Herman Cain, the next president of the United States, had a brilliant idea the other day: He will only sign bills that are three pages long. If the bill is longer than three pages, Herman Cain will veto it, and your pizza is free.

CAIN: Engage the people. Don’t try to pass a 2,700 page bill — and even they didn’t read it! You and I didn't have time to read it. We’re too busy trying to live — send our kids to school. That's why I am only going to allow small bills — three pages. You’ll have time to read that one over the dinner table. What does Herman Cain, President Cain talking about in this particular bill?

Herman Cain will only allow small bills, because America needs to make change. Herman Cain's America will not accept hundreds!

You'd think there'd be a happy medium between 2,700 and ... three, but I've never been sure at what point exactly legislation becomes too long. A three-page limit does basically mean that there will be no passing of any meaningful legislation in a Herman Cain administration, but that is probably what they want! (But how will they pass the tax cuts?)

Though the limit wouldn't totally keep the federal government from passing major bills. As Jason Linkins points out, one of the very few pieces of recent legislation that meets the three-pages-or-less standard is the original draft of the Troubled Asset Relief Program, also known as the bailouts that all the Tea Partyers hates.

Oh, also, Cain would like to build a "Great Wall of China"-style wall along our border with Mexico, and that is only the beginning of his immigration plan, which also involves the use of "electrical technology":

Now, my fence might be part Great Wall and part electrical technology. . . . Put me in charge of the fence and it will be a twenty foot wall, barbed wire, electrified on the top. And on this side of the fence, I’d have that moat that President Obama talked about. And I would put those alligators in that moat!

Future Cain promises will include replacement wasteful government employees with robots like in the Jetsons and only appointing Supreme Court justices with easy to spell names. Herman Cain is the 2012 campaign's TRUE idea man!