Do churches have the right to discriminate? 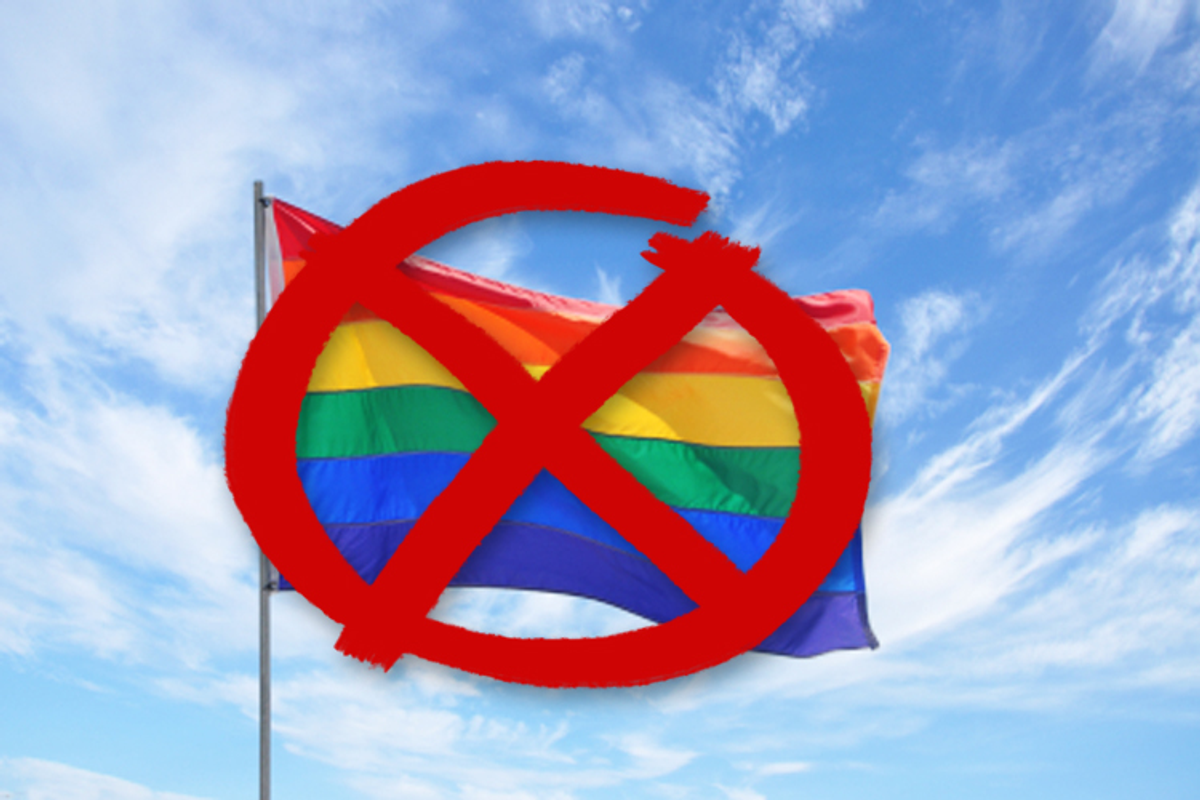 Imagine this scenario: As a part of its efforts to fight hunger, the State of Illinois gives out a number of grant contracts to private agencies that run food bank programs. One of these grants goes to the Catholic Church's social services arm, Catholic Charities, which runs a number of food bank programs in several Illinois cities. Soon, state investigators discover that Catholic Charities has imposed a severe condition on its food bank program: They will not distribute the food to hungry families unless the recipients sign an affidavit stating that none of the family members are gay, lesbian, bisexual or transgender. Illinois then terminates its grant to Catholic Charities. The group immediately files suit claiming religious discrimination, and conservative legislators repeatedly introduce new legislation in an attempt to exempt all religious organizations from having to follow the state's human rights laws even when they are using state money to fund their programs.

Outrageous, you're thinking. This would never happen, you're thinking. Even if the Catholic Church were so brazen in its bigotry as to deny food to hungry LGBT people, they have to know that they can't use public funds to do so, right? Think again.

In the State of Illinois, a real battle is underway between Catholic Charities and the state's human rights laws. Specifically, Catholic Charities has suspended its publicly funded adoption and foster care services because they anticipate state sanctions if they were to continue refusing to serve LGBT families. They have now filed a lawsuit seeking an injunction against the state from enforcing the Illinois Religious Freedom Protection and Civil Unions Act, which went into effect on June 1. The Act gives same-sex and opposite-sex couples the right to enter civil unions, which are defined as the equivalent to marriage. Partners in a civil union are to be treated as spouses as the word is defined by Illinois law. If a group such as Catholic Charities discriminates against civil union spouses by denying them access to programs funded with public state dollars, they are now in violation of several Illinois anti-discrimination laws and in danger of losing their state grants.

In many cities around the country, adoption and foster care services are farmed out to private agencies, many of them religious, through lucrative state contracts. Adoption and foster care have long been big business for the Catholic Church, and up until the last few years they have always been happy to benefit from public dollars. But now that states have begun to recognize LGBT families as part of the public, as members of the community who deserve equal treatment, those state dollars come with a catch. Publicly funded programs can't deny services to members of the public whose rights are protected by anti-discrimination laws. That has now started to include every religious conservative's favorite punching bag: LGBT families. This is not the first time Catholic Charities has gone to bat against LGBT families in states that have recognized their equality. Catholic Charities of Boston and D.C. both shut down their publicly funded adoption and foster care services rather than comply with anti-discrimination laws in those cities. But the Church still wants to have its cake and eat it too, and isn't willing to give up on those state contracts so easily. In Illinois, they're fighting on both the judicial and legislative fronts. In addition to the civil lawsuit seeking an injunction, they've also been pushing hard on friendly legislators to amend the civil union law to exempt religious organizations from having to comply.

So far, the legislative efforts have failed several times in committee. The lawsuit should also be a no-brainer. Catholic Charities essentially argues that the new civil unions law prohibits them from functioning as a religious organization according to their own religious values. Same-sex couples can go elsewhere, they say, to become foster and adoptive parents, and therefore they are not being denied access to these public services. (Never mind that the unfortunate children assigned to Catholic Charities suffer when loving, qualified parents are turned away for being gay.) To no great surprise, they have failed to anticipate constitutional arguments. Their complaint also glosses over the very real problem that many anti-gay religious groups have when attempting to use state funds to enrich their own programs: Cherry picking. Not only does Catholic Charities want to cherry pick between the members of the public who benefit from public funds, but they want to do so in a way that would not be legally permissible for a public agency. Further, the Church cherry picks through its own religious values. They have no ban on atheist applicants or applicants who have previously been divorced; these types of discrimination would also be illegal under Illinois law. Catholic Charities has never been allowed to discriminate on the basis of religion, and yet somehow managed to operate without a problem for all these years as a state contractor. The court should have a difficult time buying that being heterosexual is more integral to the Catholic doctrine than a belief in Jesus. Finally, no one is forcing Catholic Charities to take public money. They can continue to run private adoption services in as discriminatory a fashion as they like, using the Church's own private funds.

There are some Illinois citizens who will buy the argument that the civil unions law forces Catholic Charities to compromise its religious values. For them, I included the fictitious food bank example at the beginning. Any decent person can see why the Catholic Church would be dead wrong to refuse to feed LGBT families and to call that discrimination an integral part of Catholic religious doctrine. The controversy over civil unions is exactly the same. Catholic Charities wants to ignore the fact that LGBT kids exist, are assigned to the agency, and may benefit greatly from being placed in a home headed by a same-sex couple. The Church leadership wants to ignore the fact that same-sex couples often make wonderful parents, as good or even better than their straight counterparts, and that there is a dearth of eligible foster families for the number of kids who need homes. By refusing to serve LGBT families, Catholic Charities appropriates a huge quantity of state resources and reserves them exclusively for straight members of the public. Now that the state has recognized that this is illegal discrimination, it's time for them to either start serving the entire public or to give up the public funds.