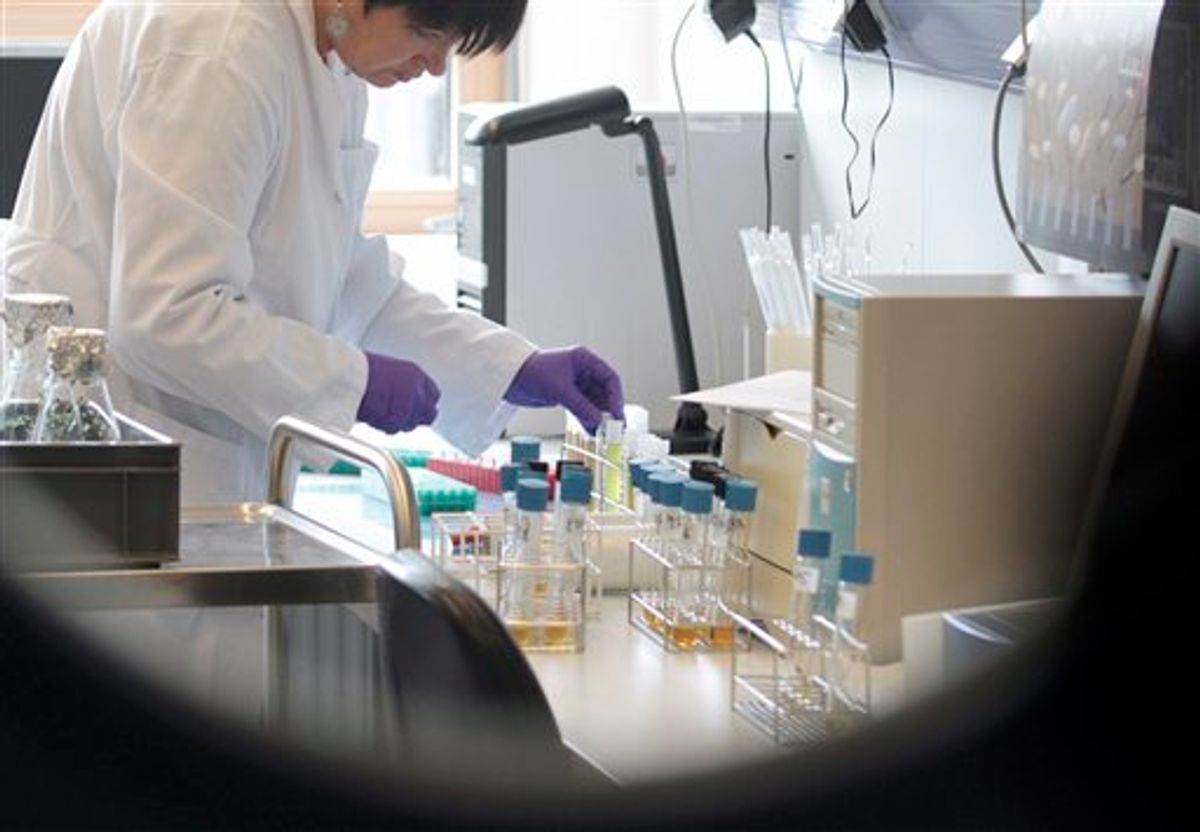 An employee of the consumer protection authority of Lower Saxony examines samples of sprouts from a farm in the Uelzen area in Oldenburg, northern Germany, Monday, June 6, 2011. In a surprising U-turn, German officials said the initial tests provided no evidence that sprouts from an organic farm in northern Germany were the cause of the country's deadly E. coli outbreak. The Lower-Saxony state agriculture ministry said 23 of 40 samples from the sprout farm suspected of being behind the outbreak have tested negative for the highly aggressive, "super-toxic" strain of E. coli bacteria. It said tests were still under way on the other 17 sprout samples. (AP Photo/dapd, Markus Hibbeler) (AP)
--

Health Minister Daniel Bahr spoke before an emergency meeting in Berlin with health officials from the European Union, which is getting concerned about Germany's handling of the crisis.

"I cannot yet give an all-clear, but after an analysis of the numbers there's reason for hope," Bahr told ARD television. "The numbers are continuously falling -- which nonetheless means that there can still be new cases and that one unfortunately has to expect new deaths too -- but overall new infections are clearly going down."

Bahr said the death toll has risen to 26 -- 25 in Germany plus one in Sweden.

Germany's national disease control center, the Robert Koch Institute, said the number of reported cases in Germany rose by more than 300 to 2,648. Nearly 700 of those affected are hospitalized with a serious complication that can cause kidney failure. Another 100 E. coli cases are in other European countries and the United States.

The Koch Institute did not fully back Bahr's optimism. It said there was a declining trend in new cases but added it's not clear yet whether that's because the outbreak is truly waning or whether it's because consumers are staying away from the raw vegetables believed to be the source of the E. coli.

EU health chief John Dalli, meanwhile, demanded that German health authorities work more closely with international experts in fighting the deadly epidemic, saying they should use "the experience and expertise in all of Europe and even outside of Europe," according to the Die Welt newspaper.

"The focus of this meeting is to ensure that all the steps are being taken to get to ... the final elimination of this contamination as soon as possible and to see whether any more resources and efforts should be made," Dalli told reporters as he went into the Berlin meeting.

Outside health experts and even German lawmakers have strongly criticized the German investigation, saying the infections should have been spotted much sooner.

Weeks after the outbreak began on May 2, German officials are still looking for its cause. Spanish cucumbers were initially blamed, then ruled out after tests showed they had a different strain of E. coli. On Sunday, investigators pointed the finger at German sprouts, only to backtrack a day later when initial tests were negative.

On Wednesday, the agriculture minister of Lower Saxony, who had first warned of eating sprouts on Sunday, said authorities are still expecting new lab results from an organic farm that has been the focus of their investigation.

Gert Lindemann said authorities still considering the farm in Bienenbuettel in northern Germany a possible source for the E.coli outbreak.

Bahr reiterated that the source of the infection may never been found, a stance U.S. experts have called a cop-out.

A warning against eating cucumbers, tomatoes, lettuce and vegetable sprouts is still in place.

Consumers across Europe are shunning fruit and vegetables, with EU farmers claiming losses up to euro417 million ($611 million) as ripe produce rots in fields and warehouses. On Tuesday, Spain, Italy and France angrily demanded compensation for their farmers who have been blindsided by the huge losses in the E. coli outbreak.

The outcry forced the EU farm chief to increase his offer of aid to over euro150 million.

Grocery stores in Germany are reporting losses up to 40 percent in sales of fresh produce, daily Bild reported.

In China, authorities ordered stepped-up health inspections for travelers arriving from Germany to prevent the super-toxic strain from reaching its shores.