NATO to push for more involvement in Libya strikes 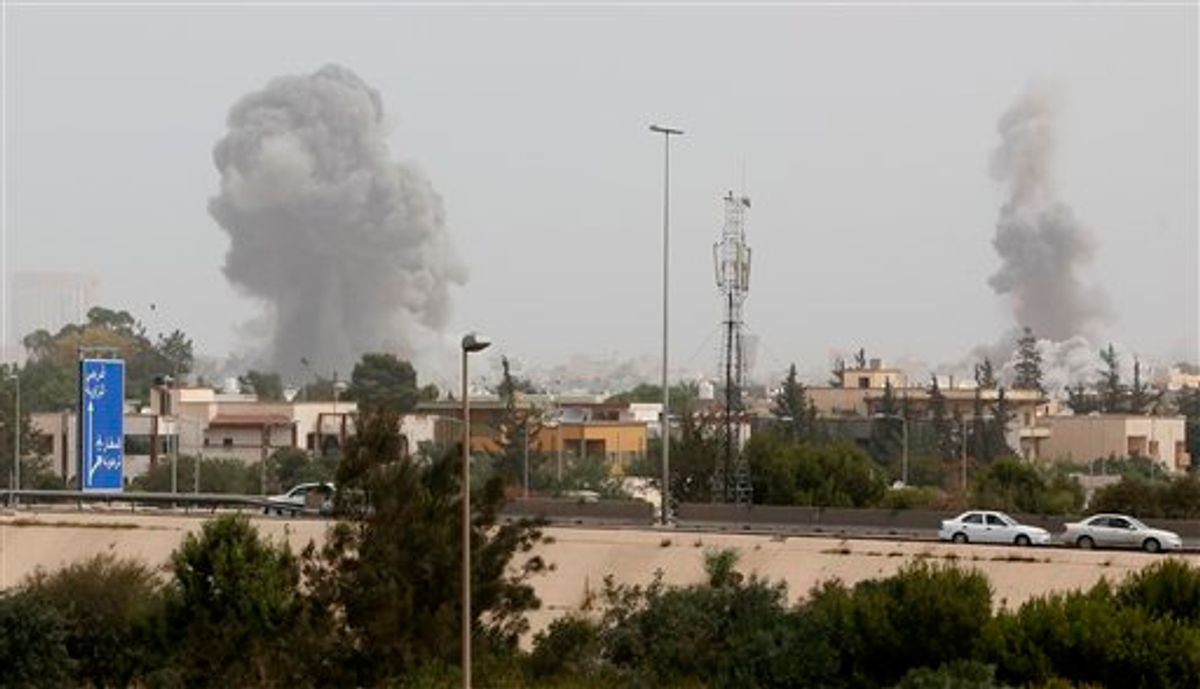 A smoke and dust cloud from an explosions rises into the sky after a NATO airstrike in Tripoli, Libya Tuesday, June 7, 2011. Moammar Gadhafi vowed to fight to the death in a defiant speech Tuesday after NATO military craft unleashed a ferocious series of daytime airstrikes on Tripoli. (AP Photo/Abdel Meguid al-Fergany) (AP)
--

With NATO war planes pounding Tripoli in daylight raids, the alliance's secretary-general was pressuring allies Wednesday to step up their participation in what appears to have become an escalating mission to oust Libyan leader Moammar Gadhafi.

British and French attack helicopters struck for the first time inside Libya over the weekend, significantly ramping up NATO's operations. Ten explosions shook the capital early Wednesday, a day after the alliance's most intense wave of air strikes of the two-month campaign.

The intensified air strikes raise the question of whether NATO is sticking rigidly to its U.N. mandate to protect civilians from attack by Gadhafi's forces.

NATO said it flew 66 "strike sorties" Tuesday and hit five command and control facilities in Tripoli, among other targets.

Wing Commander Mike Bracken at NATO's Libya operations headquarters in Naples told The Associated Press there has been "increased tempo over recent days over Tripoli" as the alliance seeks to further weaken Gadhafi's military.

But he stressed that "Gadhafi as an individual has not been a target and won't be a target."

An alliance official insisted that striking at Libyan military and intelligence command and control centers like those targeted in Tripoli has "a direct correlation" with protecting civilians because it means Gadhafi's forces can no longer receive orders from commanders.

The strikes "cut off and confuse" forces on the ground, the official said. He spoke on condition of anonymity because he was not authorized to speak publicly about the mission.

Secretary-General Anders Fogh Rasmussen has said he will use a two-day meeting of alliance defense ministers, which starts Wednesday at NATO's Brussels headquarters, to push for broader participation by allies. He wants more countries from the 28-nation alliance to share the costs and risks involved in the campaign.

"Obviously some of those allies and partners carrying the heavy burden start to ask whether it would be possible to broaden the participation a bit," Fogh Rasmussen said earlier this week. "That is also the essence of our alliance: that allies that actually have the necessary assets at their disposal, also contribute those assets, based the principle of solidarity."

NATO is not publicly releasing figures on how many nations are involved in the strikes, but it is thought to be around 17.

One of the alliance's most powerful members, Germany, is refusing to take part in the mission and that stance looked unlikely to shift Wednesday, whatever pressure is put on Berlin.

"We will not change our position concerning the military action. We will not participate," said German Secretary of State Christian Schmidt.

Sweden's government announced Wednesday it has reached a deal with opposition parties to extend the mission of Swedish jets taking part in Libya reconnaissance missions by three months when it expires June 22.

Under the plan, five of the eight Swedish jets currently taking part in the operation will continue to carry out reconnaissance missions over Libya.

A defiant Gadhafi, meanwhile, vowed Tuesday to fight to the death.

"We will not surrender: we only have one choice -- to the end! Death, victory, it does not matter, we are not surrendering!" Gadhafi said on state television.

British Defense Secretary Liam Fox said he wanted to see "increased urgency in some quarters" for the Libya campaign.

"The United Kingdom has been very forward-leading, very clear that we want to see the Libyan people safe from the excesses of the Gadhafi regime," Fox said. "We will want to push that point today."

The United States handed control of the mission to NATO in late March but continues to provide intelligence, surveillance and reconnaissance assets. U.S. planes also are providing about 70 percent of airborne refueling for the mission.

U.S. Defense Secretary Robert Gates did not speak to reporters as he entered the meeting, the last NATO gathering he will attend before retiring at the end of the month.

Gates arrived in Brussels after a farewell visit to American troops in Afghanistan. The 10-year war with Taliban insurgents is expected to dominate NATO discussions Thursday.