Newt: For Shariah law before he was against it

Not so long ago, the Muslim-baiting presidential hopeful had surprisingly warm relations with the Muslim community 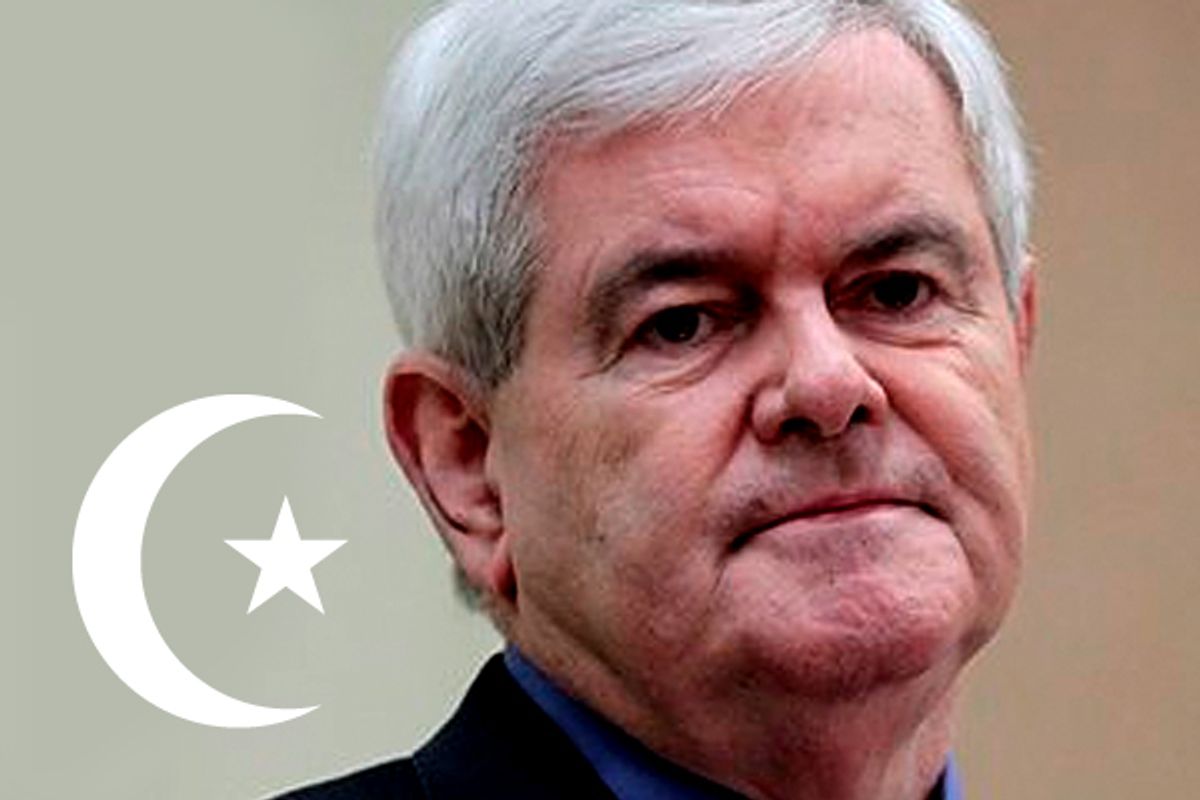 Newt Gingrich has become one of the most vocal Muslim-baiting Republicans in the country, from his call for a federal ban on Shariah to his comparison of the organizers of the "ground zero mosque" to Nazis. But Gingrich's recent rhetoric represents a little-noticed shift from an earlier period in his career when he had a strikingly warm relationship with the American Muslim community.

As speaker of the House in the 1990s, for example, Gingrich played a key role in setting aside space on Capitol Hill for Muslim congressional staffers to pray each Friday; he was involved with a Republican Islamic group that promoted Shariah-compliant finance, which critics -- including Gingrich -- now deride as a freedom-destroying abomination; and he maintained close ties with another Muslim conservative group that even urged Gingrich to run for president in 2007.

Gingrich's changing relationship with the Muslim community mirrors a similar evolution in the Republican Party at large. President Bush won a majority of Muslim votes in 2000, but after Sept. 11 and the subsequent passage of the Patriot Act, the invasion of Iraq, and Abu Ghraib, Muslim Americans shifted to the Democratic column. After Bush -- who had at least given rhetorical support to the idea of non-discrimination -- left office, explicitly anti-Muslim voices in the GOP became more prominent, most visibly during the hullabaloo last summer about the planned Islamic community center near ground zero.

Among them was Gingrich, who launched a particularly feverish media and fundraising offensive against the so-called "ground zero mosque." Last summer Gingrich also delivered an address at the American Enterprise Institute warning of "stealth jihadis" using "political, cultural, societal, religious, intellectual tools" to destroy Western civilization. "Shariah in its natural form has principles and punishments totally abhorrent to the Western world," Gingrich declared. In its blanket condemnations of Shariah -- a broad term referring to the Islamic legal tradition -- this was hardly a nuanced speech.

But a little over a decade ago, the same man, as speaker of the House, went out of his way to give Muslim staffers space for Friday prayers in one of the House office buildings. At a Council on Foreign Relations event last week, the interfaith activist Eboo Patel recalled that, when Gingrich was approached about the issue by a Muslim staffer friend of Patel's, the speaker promised, "I'm going to make sure you have a place to pray for 50, and our staff will move the tables and the chairs for you. And as long as I'm speaker, you can count on that." Joked Patel: "So Mr. Gingrich has the distinction of helping to facilitate Shariah." (Ironically, a conservative group recently called for an investigation of controversial imams who allegedly addressed this same weekly prayer meeting.)

Gingrich's warm relations with the Muslim community continued well into the mid-2000s. Around 2004, for example, he participated in a planning meeting of the Islamic Free Market Institute, according to an activist who also attended the meeting. "His tone was nothing like what you hear today," recalls the activist. "He was very positive, very supportive. His whole attitude was that Muslims are part of the American fabric and that Muslim Americans should be Republicans."

By the standards of the Gingrich we know today, the Islamic Free Market Institute was essentially engaged in "stealth jihad." The now defunct group, founded by conservative activist Grover Norquist in 1998 to woo Muslim Americans to the GOP, was involved in educating the public and policymakers about Islamic or Shariah-compliant finance. Its 2004 IRS filing reported the group spent tens of thousands of dollars to "educate the public about Islam[ic] finances, insurance, banking and investments." To most people, there's nothing nefarious about Islamic finance -- there is a large international banking business centering on special financial instruments that are compliant with Islamic strictures against interest, and so on.

So in 2004 Gingrich attended a planning meeting of a group devoted to promoting Shariah-compliant finance. Fast forward to 2010 and here's what he said in his speech to the American Enterprise Institute:

"[I]t's why I think teaching about Sharia financing is dangerous, because it is the first step towards the normalization of Sharia and I believe Sharia is a mortal threat to the survival of freedom in the United States and in the world as we know it. I think it's that straightforward and that real."

Mother Jones recently reported that Gingrich attended another Islamic Free Market Institute meeting in 2001 at which he was said to be "attentive and supportive."

As late as 2007, a Republican group called Muslims for America actually nominated Gingrich for president in its newsletter, citing the fact that "unlike other politicians, Gingrich does not see us at war with Islam." The group is run by the Hasans, a Colorado family that became big Republican donors after amassing a fortune in the HMO business. The matriarch of the family, Seeme Hasan, both founded the group Muslims for Bush in 2003 and, according to her bio, represents Gingrich's group, American Solutions, in Colorado and Nevada. The website of Muslims for America prominently features a picture of Gingrich with Seeme's son, Muhammad Ali Hasan.

Seeme Hasan was not available to comment about Gingrich's evolution, but she told Talking Points Memo last August that she was considering leaving the GOP because "the past few years in the Republican Party has been constant humiliation for Muslims."

Gingrich, for his part, is currently on a cruise in Greece and his spokesman did not immediately respond to a request for comment.