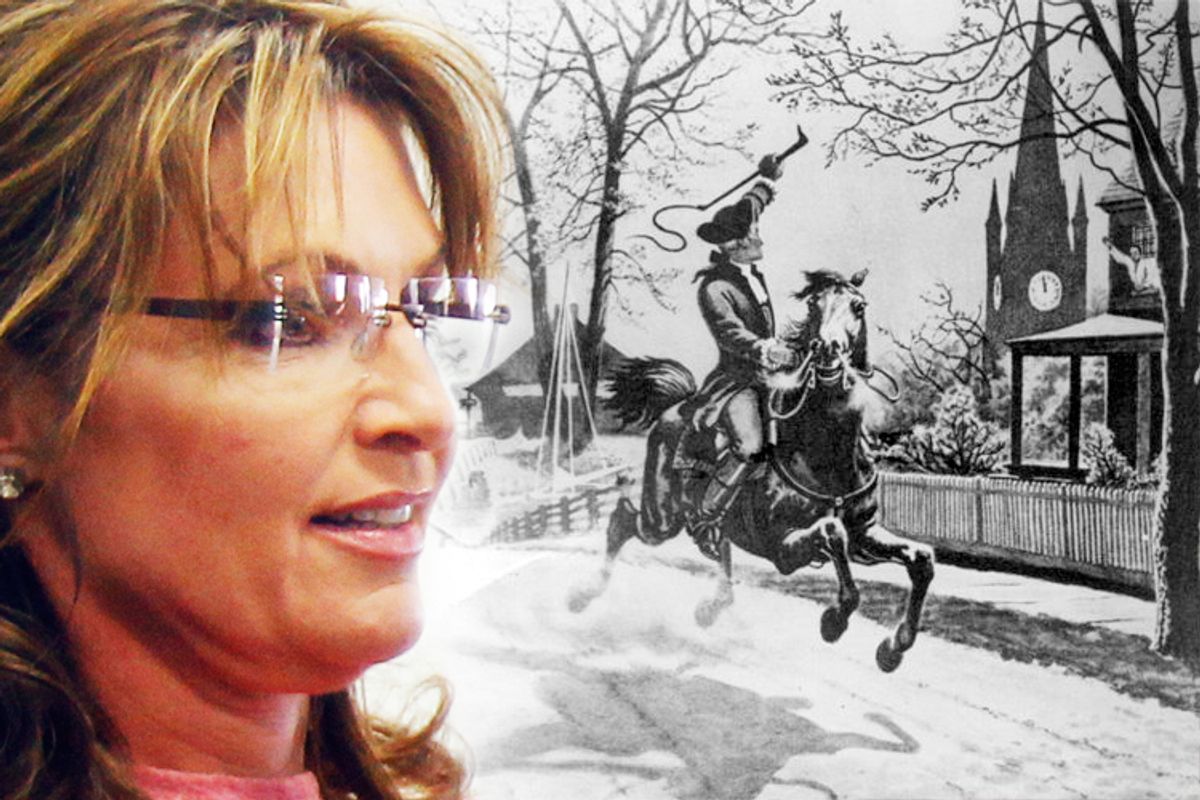 On MSNBC's "Hardball" Tuesday night, Chris Matthews ended the show with an extended comment about Sarah Palin's crude concept of America. "I don't think she's at all interested in American history," he said, characterizing her as a professional troublemaker.

Well, of course she's not interested in American history. Hearing her stumble over her words as she mangled the story of Paul Revere was depressingly familiar. As history professors specializing in the Revolutionary era, we have heard our share of students returning muddled answers to basic questions. The difference between them and the former half-term governor, though, is that they are generally careful not to embarrass themselves. When they haven't read the assignment, they'll lower their heads and pray the professor doesn't see them. If called out, they'll promptly admit to a lack of preparation and promise to get their act together. Few of them ever plunge into the great unknown, and flail away, as Palin does routinely, with an off-the-wall answer, followed by a next day do-over amid protest that the professor didn't get what she meant the first time. College undergraduates possess at least a modicum of self-respect.

It's our job as professors to tell them what happens when you merely skim the material: You don't comprehend the historical impact of ideas and events. In short, historical comprehension is measured by the ability to process information thoughtfully.

We should judge Palin as we do college students. She took the Boston tour, read the exhibit descriptions, and learned absolutely nothing. She apparently half-heard what the tour guide presented. Maybe she was busy thinking about how her hair looked. Regardless, she got an "F" on the Paul Revere quiz. And there's no extra credit. Everyone knows what happens when the ill-prepared student comes to the professor's office, hoping that by smiling, crying, or inventing excuses she can get her grade changed. But Palin thinks she can get away with an appearance on friendly Fox News, pretending that what she said was historically true. At least this time, Chris Wallace's grin provided evidence that he wasn't buying her dubious do-over.

Palin has a knack for blaming others for her spectacular blunders. In her ghostwritten post-campaign biography, "Going Rogue," she accused Katie Couric of being rude when the CBS anchor asked, "What newspapers and magazines did you regularly read?" In a long-after-the-fact explanation, Sarah claimed she was tongue-tied only because she was flabbergasted. It was a matter of honor for her to refuse to answer the big-city bully.

Really, though? The ploy Palin (or ghostwriter) constantly uses is that of misdirection: Blame Couric instead of your infallible self by making it an issue of honor rather than ignorance. The dodge makes it seem that Palin could have answered but chose not to–never mind that it was a simple question.

The most obvious reason to read regularly, and read in depth, is to exhibit the kind of curiosity that makes you a more interesting person. We are wont to ask our students what reading they do outside of class. It's only a gotcha question if you do not read. Should Palin get a free pass when she displays her outstanding lack of curiosity about American history?

What is ignorance? It has nothing to do with where you are born or whether or not you are comfortably situated in the middle class. To be ignorant is to be unaware: the state of being uninformed, unknowing, unlearned. The word comes from the Latin ignōrans, ignōrāre -- to not know. It is related, of course, to the verb "to ignore." Our society values competence and the ability to think clearly. Whether to read and discover, or to ignore, is a choice.

Sarah Palin's real problem is that she is not embarrassed by her ignorance. Rather than recover from a misstep by engaging with a competently written text, she will generate a tactical comeback based on something an aide tells her. The impulse to ignore means that she will never truly be prepared. She will continue to fudge the facts and return, thoughtlessly, to the offensive with one of her platitudinous old reliables: Paul Revere loved freedom. And gun rights. Only the true believers, those who love her pouty, angry poses, will agree that she was right all along about the patriot silversmith.

Okay, Sarah. Here's your guide to what you need to know about Paul Revere. He did not ring bells or fire warning shots. He did not warn the British. He did not defend "freedom." And he did not yell, "The British are coming!" because he was a British subject in 1775. As Professor David Hackett Fischer explained in his book "Paul Revere's Ride," Revere would have shouted, "The regulars are coming!" That is, the regular army. Americans in and around Boston were called "country people." Revere was not defending a nation, because the nation we became did not exist yet. Before the phrase "United States of America" was born with the Declaration of Independence, those resisting British power, identifying with the Continental Congress, were collectively known as the "United Colonies."

Paul Revere became a legendary figure not in 1775, when he rode, but around the time of the Civil War, owing to the phrasings of Henry Wadsworth Longfellow. The poet's famous work, "Paul Revere's Ride," invented a mythic lone rider who sent up his "cry of alarm to every Middlesex village and farm" and held the "fate of the nation" in his hands. To be historically correct, Revere was asked by the courageous Harvard-trained physician Joseph Warren to ride out of Boston and warn Samuel Adams and John Hancock that the regulars were pursuing them. But he didn't make it past Lexington, where Adams and Hancock were staying, because he was detained by British soldiers. He never reached Concord.

Nor was he alone in this enterprise. A rider named William Dawes followed an alternative route from Boston, outpacing Revere, and there were many others who acted as messengers. It must surprise all of us who attended elementary school that "One if by land, two if by sea," the lantern message celebrated in Longfellow's poem, was not performed by Revere; nor does he receive the message on the opposite shore. The lantern did not make much of a difference in the night's events. Bells rung or shots fired as the regulars approached Lexington were carried out by unnamed locals. The people opposing the soldiers were roused, indeed–not by Revere, but by a host of country people.

If there must be a hero of that night, as the battles of Lexington and Concord impended, it was Dr. Joseph Warren, who was martyred two months later when he took up arms as a simple soldier at the Battle of Bunker Hill. And why was it that Longfellow wrote the "Midnight Ride" poem in 1861? As the grandson of a man who knew Revere personally, he was looking for a historic model in rallying New Englanders to take up the gauntlet against slavery and defend the ideal of liberty on the eve of the Civil War.

Getting history right should matter more to the politicians who invoke it in limelight-grabbing statements before the cameras. Sarah Palin's constant mangling of our history is indicative of nothing so much as the state of America's celebrity culture. If she travels in a big fancy bus, adorned with a mock-up of the Constitution, it is imagined that she loves America and loves its history. The truth is that her approach to the nation's past is merely an extension of her ongoing Reality TV show. Instead of the wilderness of Alaska, of which she is admittedly something of an expert, she is venturing into a foreign country when she weighs in on United States history.

We are not so cynical as to suggest that her visit to historic sites was completely contrived. But when she boasts of how proud she is of "real" Americans of today or yesteryear, she ought to know what she's talking about. Chris Matthews says he thinks she sees the federal government as the modern equivalent of an oppressive British government circa 1775. He sees her purposes as sinister. He reads national politicians for a living.

For us, the matter is more one of a basic respect for knowledge. For without intellectual engagement (and working at getting facts straight), you're not qualified to tell TV viewers that you have a vision for America's future. Sarah Palin has cashed in on being the McCain campaign's most unforgettable foul-up; as a result, she is able to go on vacation pretty much whenever and wherever she wants. This time, though, she took a vacation from history.