A pregnancy changes everything

Dragging a pregnant wife through more slime is unthinkable. Weiner has to resign 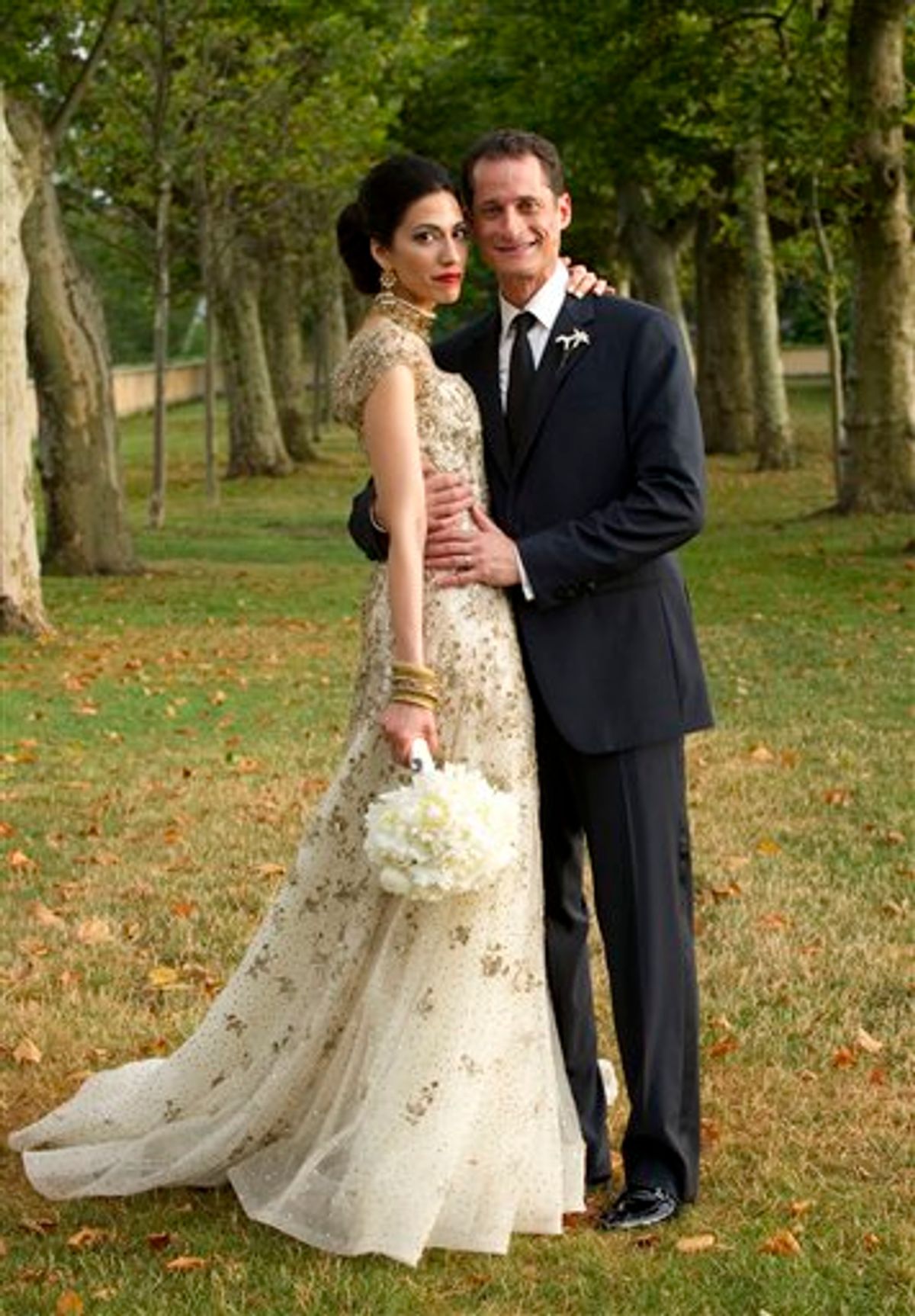 FILE - In this July 10, 2010, file photo provided by Marie Ternes, Rep. Anthony Weiner, D-N.Y., poses with his wife Huma Abedin, close aide to Secretary of State Hillary Rodham Clinton, for a formal wedding portrait at the Oheka Castle in Huntington, N.Y. Weiner confessed Monday, June 6, 2011, that he tweeted a bulging-underpants photo of himself to a young woman and admitted to "inappropriate" exchanges with six women before and after getting married. (AP Photo/Barbara Kinney, File) (AP)
--

If Huma Abedin is pregnant, as the New York Times is reporting, I think Anthony Weiner has to resign -- and I actually expect him to. That news changes everything.

I've resisted calling for Weiner's resignation, even though I've deplored his reckless behavior. Since I've defended the "victim" of the mess all along, the 21-year-old college student who received the photo unwillingly on her account, and who was slimed by conservative bloggers, I have to acknowledge that Weiner brought about her sliming. And now he's apparently done the lowest thing most of us can think of: Humiliate not just his wife, but his pregnant wife.

If that's true, deciding to hang tough, weather an ethics investigation and fight the coordinated right-wing effort to run him out of office becomes an act of cruelty. Already the naked photo Andrew Breitbart said he wouldn't make public (unless he had to protect the women involved) became public, when two conservative shock jocks happened to snap a photo of it on Breitbart's phone, and posted it online. Breitbart issued a statement saying he "regrets" the unauthorized photo of his photo by the scampy shock jocks. It reminds me of Condi Rice saying, "No one could have predicted" terrorists would use "airplanes as missiles," after she'd already been briefed on just such plots. Showing the photo to right-wing shock jocks, and believing it would stay private, is either unbelievable, or unbelievably stupid. But hey, let's give him the benefit of the doubt.

There are almost certainly more photos, more women who could come forward. He admitted to six cyber-affairs; we've only heard from three of the women, so far. The harder Weiner fights, the more likely he is to face more shaming. I argued last night on "The Ed Show," along with Bill Press, that so far we don't know that Weiner's done anything illegal -- and if we had let right-wing slime plots derail Democratic politicians, Bill Clinton never would have been president. And I still have to say: Who's next? Because there will be another takedown.

But this news is impossible to parse on a political level; the default reaction for most people is going to be personal. It was bad enough that he cyber-cheated on his wife, and behaved so recklessly that the whole world found out about it. Dragging her through any more humiliation, while she's pregnant, would be cruelty. He can't do it. Weiner has to resign. He owes it to his family.

Abedin may be through with him; she hasn't spoken about the news, and admirably, she left with Secretary of State Hillary Clinton on a trip to northern Africa today. Still, she'll have more peace and privacy if Weiner puts this mess behind him, and she deserves it.

Update: I've heard several people suggest that Weiner shouldn't resign if his wife wants him to fight. If that turns out to be the case, I might feel differently. Others have suggested that her pregnancy should change nothing at all; it's a private matter. That's all fine. I'm personally not capable of saying: Cyberinfidelity: fine. Tweeting naked photos idiotically recklessly. No problem. Lying about it, and making reporters complicit in your coverup? AOK. Doing all of that when you have a pregnant wife (who has rather conspicuously failed to come out in your defense)...I can't go there. But if the details change, you won't hear about it from me. I'm getting out of the muck. As many people are arguing, correctly, this is a lurid distraction from real news.