How many people has Andrew Breitbart shown the Weiner photo to, exactly?

An attempt at "doing the decent thing" lasts about two days 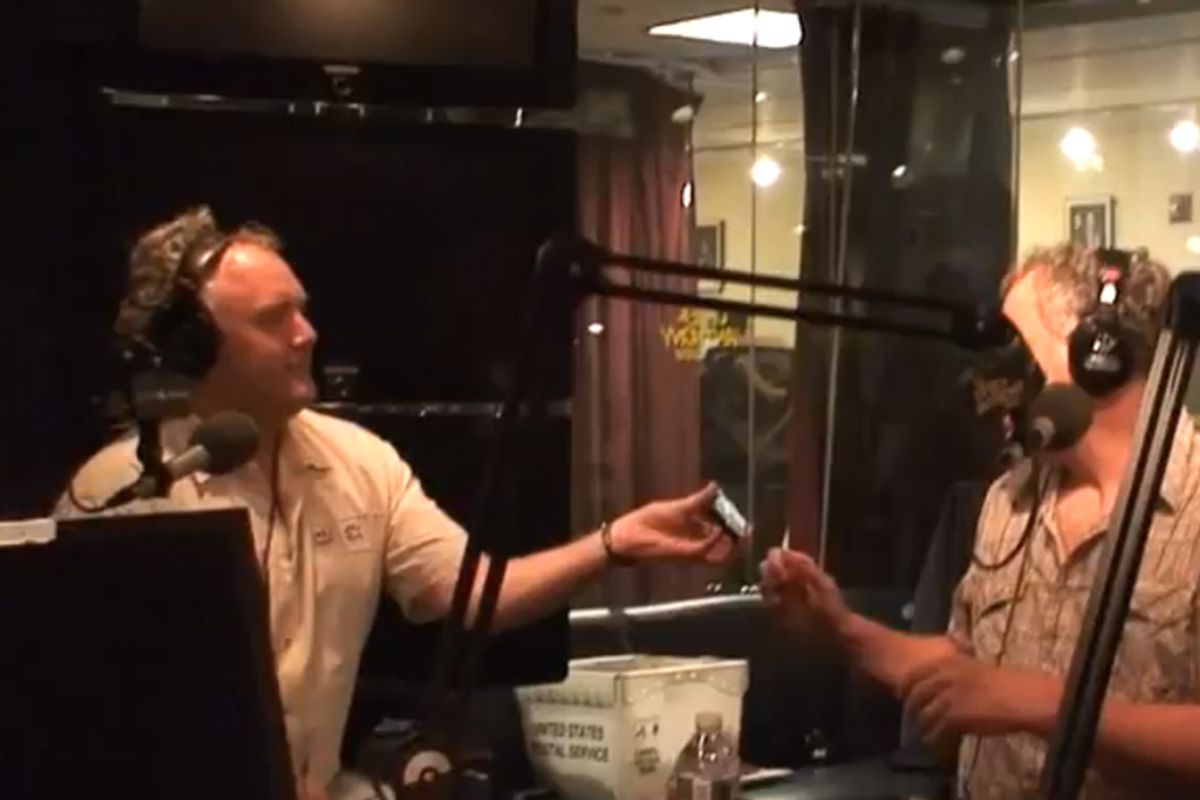 In his alternately self-pitying and self-aggrandizing performance at the start of Anthony Weiner's press conference on Monday, Andrew Breitbart fulsomely praised himself for declining to publicly release the especially lewd photo of the congressman that he wanted everyone to know that he totally had and would totally release if he had to, because the liberals made him. (That is the most sense I can make of what he was saying.)

Breitbart wanted to be praised for his kindness and discretion. He felt true compassion for Mr. Weiner! "I am doing this to save his family," he said. "I'm trying to do the decent thing here and not release the photo."

Two days later, the photo made it onto the Internet. Ha ha, whoops. So much for the decent thing!

The reason it leaked so quickly: Breitbart has apparently just been going around showing the photo to people who want to see it. I guess it's not a public release if you're showing it one person at a time?

Breitbart loaded the picture up on his phone and passed it around while he was doing an interview with Opie and Anthony, two "shock jocks" who of course film themselves doing their show, with video cameras. A clear shot of the picture on Breitbart's phone was then soon sent out on Twitter by Opie.

Breitbart eventually issued something that resembles an apology, but it is not actually an apology, because it carefully lays the blame for everything on other people:

Earlier today, a photograph resembling one that I had withheld from publication in the Weinergate saga was released without my knowledge or permission.

Prior to the publication of our story on BigGovernment.com and BigJournalism.com this past Monday morning, it was necessary to show the pictures I had received from our source to several news producers, including several at major news networks, to prove that the additional material I described really did exist, which some have continued to doubt.

This morning, I showed a photograph, which our source claims Weiner sent her, to radio hosts "Opie and Anthony" of the Sirius XM radio network on my mobile device. Somehow, without my knowledge or permission, apparently a picture was taken of my mobile device, and subsequently published by Opie (Gregg Hughes) on Twitter.

Opie backed him up: Breitbart didn't intend to put the photo online. But Breitbart was not showing the photograph to news producers in order to prove its veracity. He passed his fucking phone around to everyone in a satellite radio studio.

There's audio, too, of everyone in the studio giggling as everyone looks at the picture Breitbart said he would keep to himself, out of a sense of decency that only applies when Breitbart is not on the radio, apparently. "It was necessary to show the pictures I had received from our source to several news producers, as well as the head detective from 'Law and Order: Criminal Intent,' plus the comedian Jim Norton, in order to get famous people to like me."

So here's my question: This is at least four people Breitbart showed the photo to who had no pressing journalistic need to see it. How many more are there? How many other people has Andrew Breitbart shown the photo to since Weiner apologized to him? Shouldn't Andrew give us a specific list of the people he's shown the picture to, and when he showed it to them? Does he think this behavior is compatible with "trying to do the decent thing"? Has he shown it to Ann Coulter? I am just asking questions! If Mr. Breitbart has any respect for truth and journalism and integrity and flags and liberty, he will tell us, immediately.