Why is the U.S. striking Yemen? 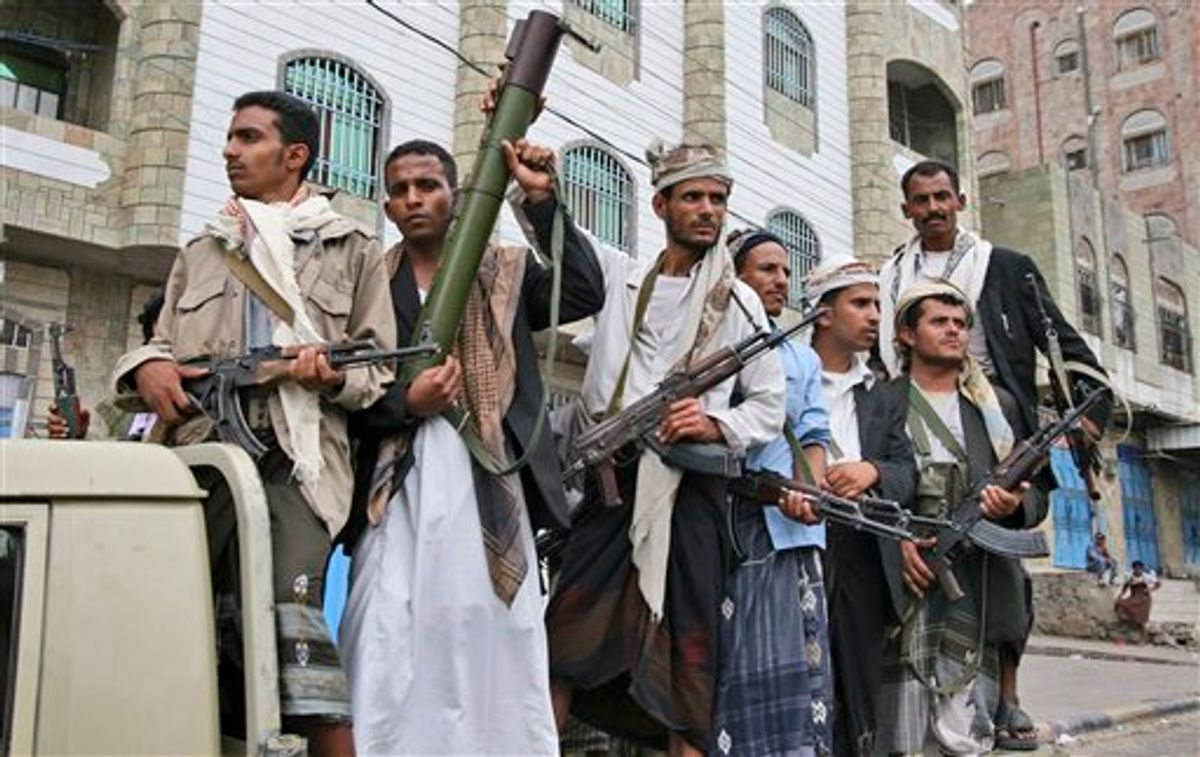 Armed Yemeni tribesmen stand on the back of a vehicle in Taiz, Yemen, Wednesday, June 8, 2011. Hundreds of armed tribesmen have taken control of part of Yemen's second-largest city, Taiz, security officials said Wednesday. The advance on Taiz showed the government's already tenuous control over the country has slipped further since President Ali Abdullah Saleh was wounded in a rocket attack on his compound in the capital Sanaa on Friday and left for medical care in neighboring Saudi Arabia. Saleh left as his country was edging closer to civil war. (AP Photo/Anees Mahyoub) (AP)
--

The New York Times reported Wednesday evening that the U.S. is intensifying a "secret campaign" of air strikes in Yemen:

The Obama administration has intensified the American covert war in Yemen, exploiting a growing power vacuum in the country to strike at militant suspects with armed drones and fighter jets, according to American officials.

U.S. attacks in Yemen are nothing new. A diplomatic cable released by Wikileaks in last December's cache dump revealed that Yemen had been covering up U.S. drone strikes targeting al-Qaida suspects within Yemeni borders. According to the Times, these covert air strikes were paused for most of the past year, owing to "concerns that poor intelligence had led to bungled missions and civilian deaths." Attacks resumed in recent days, as the Times reports:

American jets killed Abu Ali al-Harithi, a midlevel Qaeda operative, and several other militant suspects in a strike in southern Yemen. According to witnesses, four civilians were also killed in the airstrike. Weeks earlier, drone aircraft fired missiles aimed at Anwar al-Awlaki, the radical American-born cleric who the United States government has tried to kill for more than a year. Mr. Awlaki survived.

News of this renewed U.S. military activity comes during a particularly fraught time in Yemen. President Ali Abdullah Saleh fled the country on the weekend to Saudi Arabia for treatment of severe burns he suffered in last week's bomb attack on his presidential compound. Tens of thousands celebrated his departure in the streets, despite vows from Saleh's representatives that he would soon return. Deadly fighting between government forces and fractured opposition groups continues.

The question arises then, as to whether the U.S. should be continuing a campaign that was originally predicated on collusion with Saleh's unpopular regime? According to the Times, however, the American activity has the go-ahead from Yemen's major opposition leaders:

Concerned that support for the campaign could wane if the government of Yemen’s authoritarian president, Ali Abdullah Saleh, were to fall, the United States ambassador in Yemen has met recently with leaders of the opposition, partly to make the case for continuing American operations. Officials in Washington said that opposition leaders have told the ambassador, Gerald M. Feierstein, that operations against Al Qaeda in the Arabian Peninsula should continue regardless of who wins the power struggle in Sana.

The U.S. official line has urged a swift transition of power, which would see Saleh cede power to an interim administration within 30 days in exchange for immunity from prosecution. White House spokesperson Jay Carney said:

Indeed, according to U.S. sources, it is because the Yemeni government have shifted resources to fighting for their own survival as opposed to battling al-Qaida that the U.S. have resumed air strikes to fill this void.

But, as the Times notes, new conflict in Yemen imports new risk to this kind of international involvement: "one faction might feed information to the Americans that could trigger air strikes against a rival group." Now, more than ever, the Obama administration has to tread carefully in a fragile region.