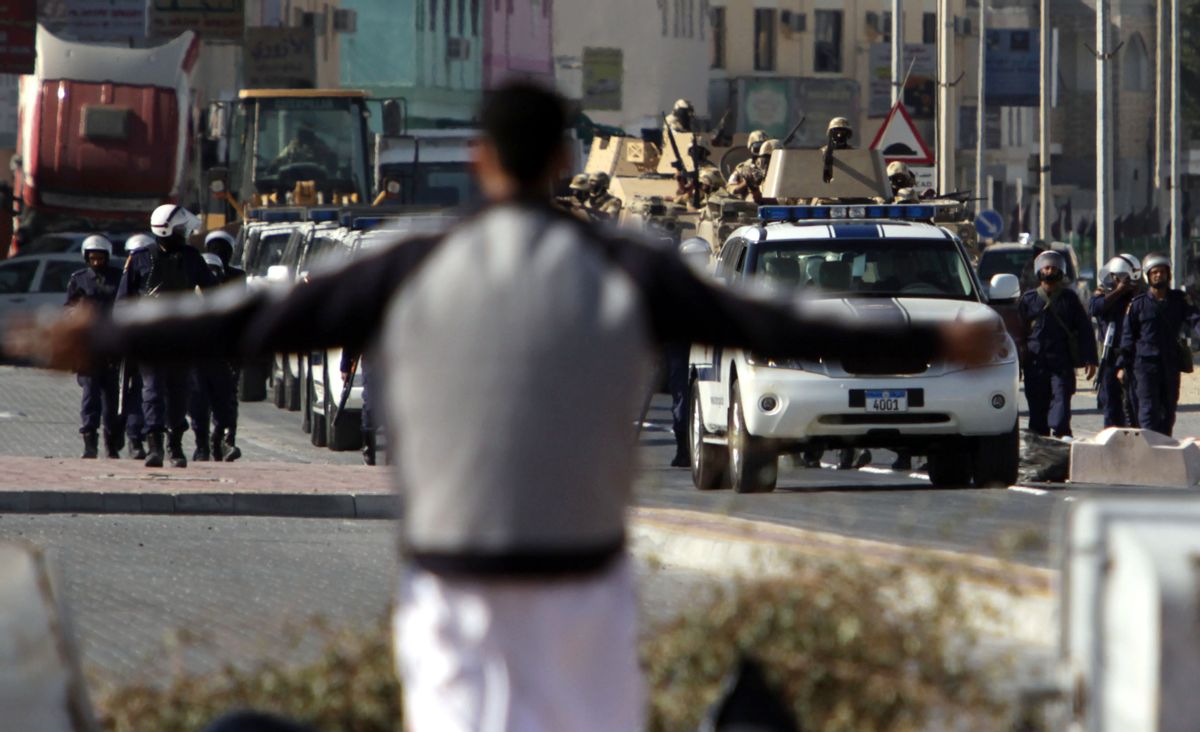 A resident spreads his arms in front of riot police and tanks moving into the Shiite Muslim village of Malkiya, Bahrain, southwest of Manama, on Sunday, March 20, 2011.Bahraini authorities are trying to crush a revolt by the nation's majority Shiites for greater political freedoms. Saudi Arabia and other Gulf states have sent forces to help Bahrain's Sunni dynasty. (AP Photo/Hasan Jamali) (Associated Press)
--

The Bahraini government's brutal crackdown on a Shiite protest movement has shifted from the public scenes of police attacking protesters in the streets to the detention and prosecution of opposition figures and doctors.

And now the Bahraini regime has inked a contract with a high-priced Washington law firm to help fight a labor complaint filed by the AFL-CIO about an under-reported aspect of the crackdown: the firing of hundreds of workers and union leaders for participating in strikes and other pro-democracy actions. Sorini, Samet & Associates will be paid at a rate as high as $550 per hour, plus expenses, to help Bahrain's Ministry of Foreign Affairs lobby against the April complaint submitted by the AFL-CIO under the U.S.-Bahrain Free Trade Agreement.

The firm will help Bahrain craft a response to the allegations of human rights violations, support the regime's "engagement of U.S. administration officials and members of Congress," and help reach out to "think tanks and scholars ... and the media," according to a foreign agents registration filing from late last month.

The AFL-CIO complaint, submitted to the Department of Labor, alleges that Bahrain has violated labor protections that are laid out in the Free Trade Agreement between the countries, which was passed by Congress in the mid-2000s and signed by President Bush. The AFL-CIO complaint demands the Obama administration formally intervene under the terms of the trade agreement to pressure Bahrain to stop retaliating against trade unionists -- and also to serve notice that the U.S. is withdrawing from the deal in 180 days.

Unions played an important role in Bahrain's protest movement, including by launching a week-long general strike in March. In response, several government-owned companies, including Bahrain Petroleum Co., fired hundreds of Shiite workers who participated in strikes and protests. The AFL cites an April report from an international labor group finding that "some 2,000 workers in 30 mainly government enterprises have been sacked for joining trade union actions in support of dialogue and an end to violence."

In Sorini, Samet & Associates the Bahraini regime picked a firm that boasts its professionals "have been involved in virtually all significant U.S. trade negotiations and trade legislation" in the last 25 years. The contract with Bahrain was signed by partner Andrew Samet, a former deputy undersecretary of labor during the Clinton administration and former top aide to Sen. Daniel Patrick Moynihan of New York. Samet's bio notes that he was responsible for implementing the labor deal that accompanied NAFTA.

Several other lobbying and law firms who have lucrative contracts with repressive Mideast governments (for example Egypt) have received unusual scrutiny in the past six months as the Arab Spring has unfolded. Sorini, Samet & Associates did not return requests for comment.

President Obama, who has been criticized for giving Bahrain a pass on human rights abuses because of U.S. energy and military interests in the Gulf, this week met with Crown Prince Salman bin Hamad al-Khalifa in Washington. The crown prince also met with Hillary Clinton. It's not clear if he or any other Bahraini officials broached the trade issue with administration officials.