Revelations from the Sarah Palin emails

Highlights from this afternoon's coverage of today's 24,199-page release 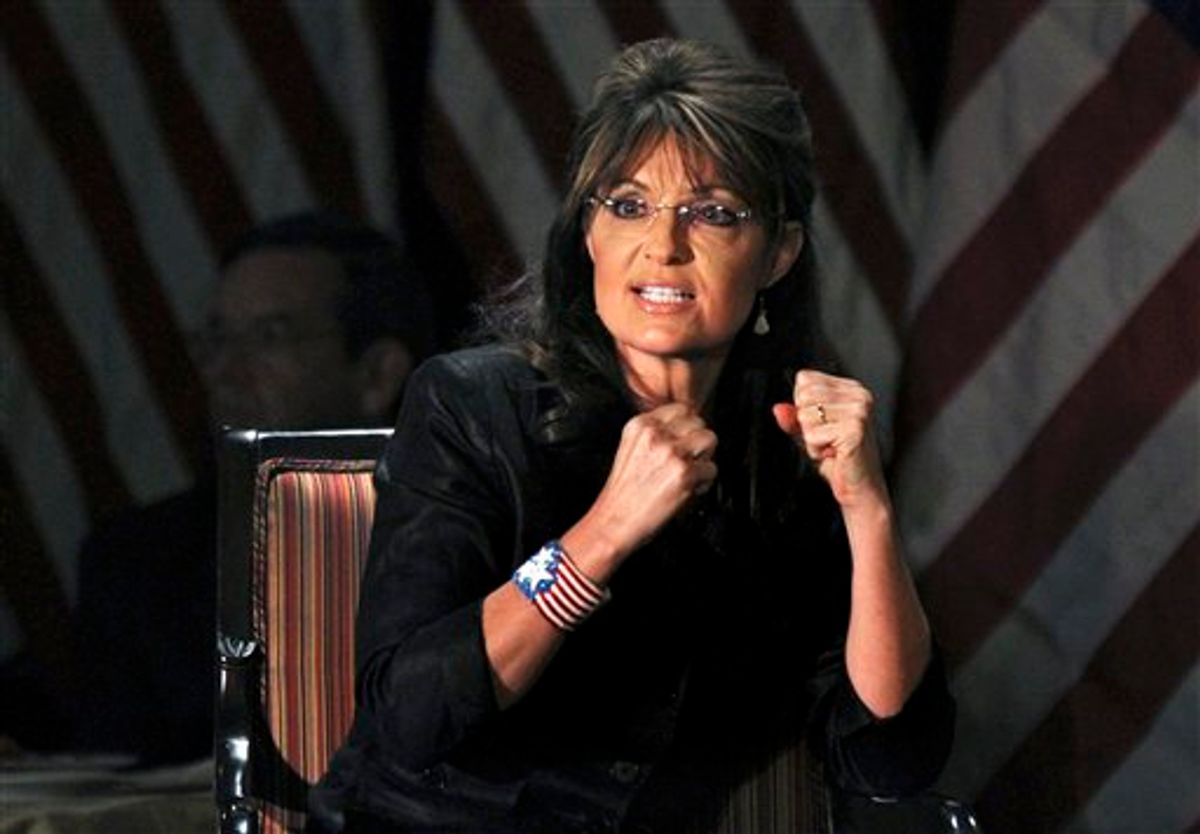 FILE- In this Feb. 17, 2011 photo, Former Alaska Gov. Sarah Palin answers questions at a public appearance at a Long Island Association (LIA) meeting and luncheon in Woodbury, N.Y. Palin is scheduled for a court hearing on her request to extend a restraining order against 19-year-old Shawn Christy of McAdoo, Pa., accused of stalking the 2008 Republican vice presidential candidate, her family and friends. (AP Photo/Craig Ruttle, file) (AP)
--

At 9 a.m. Juneau time -- that's 1 p.m. ET -- a small cadre of journalists camped out in Juneau, Alaska, started to open boxes full of previously unpublished emails sent by Sarah Palin while she was governor of Alaska. Here are the highlights of what they've discovered so far.

5:30: We're going to call it a day. It will be hours -- maybe days! -- before professional and citizen journalists have sorted through the tens of thousands of still-unread messages; we'll be following along with you.

Someone recommended to me that we study the alaskan model of revenue distribution back to the citizens and get bills introduced in the state legislature in california florida and elsewhere that if they do go to offshore drilling they should split the revenue stream with a specified amount (maybe half) going to the citizens as a direct benefit. How much does each alaskan get?…Do you have an expert who could explain all this to me?

5:00: Mother Jones's David Corn spotlights an email exchange (pdf) showing how one of Palin's interviews -- a 2007 segment for Energy TV -- was taped. The content was all crafted beforehand by members of Palin's team; Palin herself simply read her "answers" off a teleprompter.

4:45: HuffPost draws our attention to a publicity party invite sent to Palin in September 2008; the note urged guests to come celebrate an Echo Park Records band -- and "bring beef, tequila and condoms." (Palin never replied, but, as Jason Cherkis notes, she did "forward the invite on to her scheduler.")

4:20: At The New York Times, Michael Shear points out an email from early August, 2008, in which Palin complimented a speech given by then-candidate Obama."[Obama] gave a great speech this morn in Michigan," Palin told her aides -- before moving on to accuse her soon-to-be-rival of "[stealing] our Energy Rebate $1000 check idea [and] our TC-Alaska gasoline talking points." Her conclusion: "He did say 'yay' to our gasoline. Pretty cool. Wrong candidate."

4:15: On September 15, 2008, Palin wrote the following in a message to Alaska colleagues: "Climate change is a top issue of course. Just head's up. Also, predator control's been quiet, but let me know if the issue's volume gets turned up and I need to respond to anything."

4:10: Another find from Gawker's John Cook: It appears Palin may have ghostwritten a letter to the Anchorage Daily News.

Also 4:00: Sarah Palin tweets a link to the trailer for "The Undefeated."

More than a year before the Washington Post publicly revealed that Gov. Palin had billed state-funded per diems for 312 nights spent at home, the governor's scheduler sent an email about "confusion" surrounding "travel and ethics for the Governor and First Gentleman."

He cites a March, 2007 email to Sarah, Todd, and the state attorney general, which reads in part:

There seems to be confusion on the answers to questions about First Gentleman and children's travel and per diem, using the King Air, TA's, per diem, and so forth. The idea is to do things right from the get-go so we don't have any questions about how we should have done it later. Also, the LA Times writes that Sarah Palin and her team were "swamped" (that's Palin's word) with media requests in the weeks following her addition to the McCain ticket. Palin responded to an email in which her communications director listed several of the questions he'd received like this:

"Arghhhh! I am so sorry that the office is swamped like this! Dinosaurs even?! I'll try to run through some of these in my head before responding. And the old, used tanning bed that my girls have used a handful of times in Juneau? Yes, we paid for it ourselves. I, too, will continue to be dismayed at the media and am thankful you and Sharon are not part of the stange [sic] goings-on in the media world of today."

2:55: The Huffington Post's Marcus Baram notes that in February, 2007, Palin's deputy legislative director suggested that she meet with Pete Rouse -- "chief of staff for some guy named Barack Obama."

2:45: On August 29, 2008 -- the day McCain named Palin his VP candidate -- Palin's scheduler e-mailed her the following: "Congratulations to you and your family! We love you. I just received a call from VP Dick Cheney. He called directly from his home and asked that you give him a call. Here is his direct number."

2:40: ABC News's liveblog, updated by Michael Falcone and Shushannah Walshe in Juneau, notes that Palin may have "had her eye on" the VP slot "months" before she was nominated. Falcone and Walshe cite several emails from the summer of 2008, in which supporters encouraged Palin to join the race -- all of which were forwarded on by Palin to her aides.

2:30: Over at the Mother Jones liveblog, Tim Murphy notes: "Even in professional correspondence, Palin had a propensity for the folksy expressions that have become her hallmark." E.g. "Unflippinbelievable."

2:00: The New York Times, The Guardian, The Los Angeles Times, MSNBC/ProPublica/Mother Jones and The Huffington Post have now scanned and uploaded some of the emails.

1:37: David Corn tweets: "First #Palinemail of note: state official knows that he should do business with her over her personal account. http://t.co/9" [Email is reproduced at the link]

1:20: The Daily Beast's Shushannah Walshe tweets: "The first e mail I took out of the box. A poem sent to a group including the gov of Alaska. #palinemails http://lockerz.com/s/109430649"

1:03: Pilkington tweets again: "Second #sarahpalin email: 'what the hell has happened to the leadership positions of our great states?' That's more like it sarah!"

1:01 p.m.: The Guardian's Ed Pilkington, on the scene in Juneau, tweets: "First #sarahpalin email _ world ecxlusive - says: 'Click has recommended the appointment of redacted to fill a vacancy on the safet council'"

Midday: SarahPAC Treasurer Tim Crawford says in a statement: "The thousands upon thousands of emails released today show a very engaged Governor Sarah Palin being the CEO of her state. The emails detail a Governor hard at work. Everyone should read them."