The perils of ignoring science 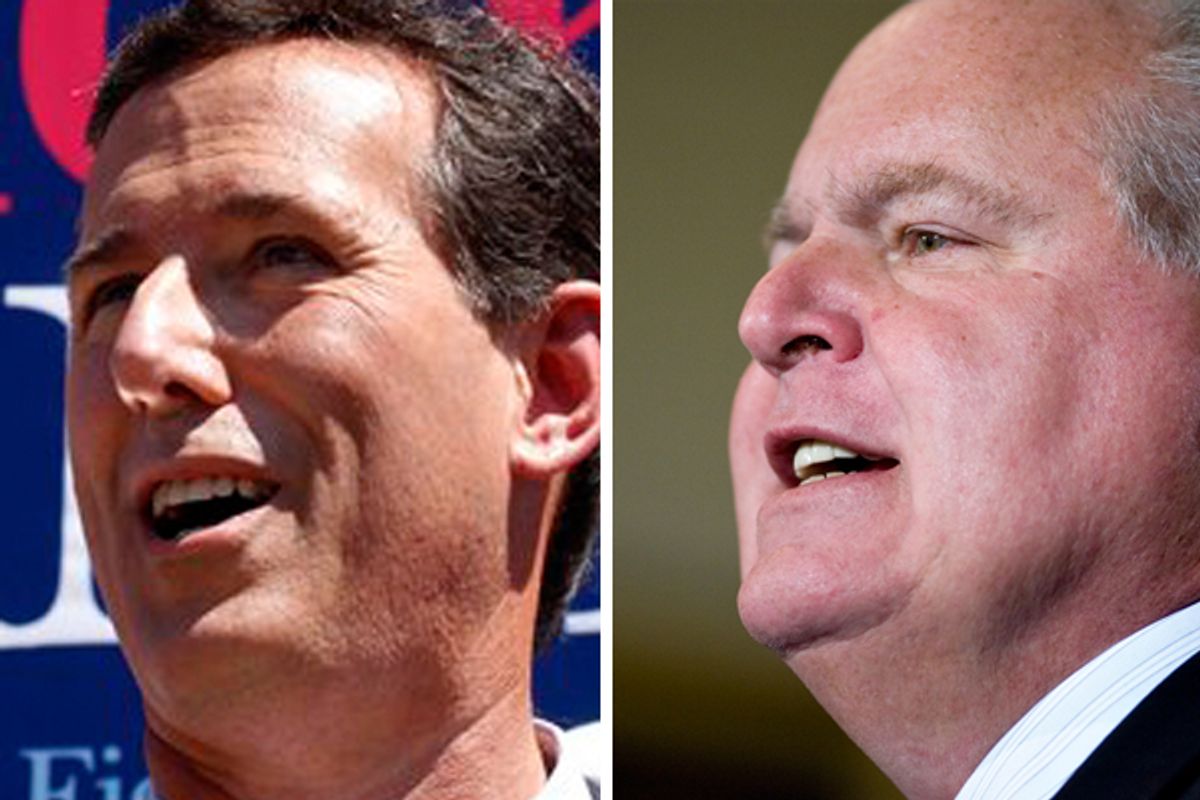 I heard a remarkable thing on the radio the other day and it had nothing to do with a congressman’s nether regions.

A local NPR reporter was talking with Joseph Nicholson, CEO of Red Jacket Orchards in Geneva, New York, up in the neck of the upstate woods where I was born and raised. There’s been a lot more rain than usual, he said. Produce hasn’t been exposed to sufficient "heat units" -- in other words, the sun.

"We're going to be at least two weeks behind in harvest or ripening," he said, and if the skies don’t brighten up soon, yields could be down 30 to 35 percent. That’s a lot of lost apples -- and cherries, peaches and plums (although the rhubarb is doing just fine, thanks for asking).

As upstate kids we were told -- apocryphally -- that the only part of the world more overcast than us was Poland, so the idea that all these years later it’s cloudier than ever is startling. Is this part of manmade climate change?

Republican presidential candidate Rick Santorum sure doesn’t think so. The other day he told Rush Limbaugh "the idea that man… is somehow responsible for climate change is, I think, just patently absurd." He went on to call it a left-wing conspiracy, "just an excuse for more government control of your life… I’ve never been for any scheme or even accepted the junk science behind the whole narrative."

Better you should listen to Ram Khatri Yadav, a rice farmer in northeastern India, who recently complained to The New York Times, "It will not rain in the rainy season, but it will rain in the nonrainy season. The cold season is also shrinking." He’s experiencing climate change as a life or death reality. In a June 4 article headlined "A Warming Planet Struggles to Feed Itself," the Times reported, “The great agricultural system that feeds the human race is in trouble… Many of the failed harvests of the past decade were a consequence of weather disasters, like floods in the United States, drought in Australia and blistering heat waves in Europe and Russia. Scientists believe some, though not all, of those events were caused or worsened by human-induced global warming.”

For years, scientists believed that the carbon dioxide produced by greenhouse emissions were at least in part beneficial for crops, acting as a fertilizer that helped counterbalance the deleterious effects of climate change. But according to the Times, new research indicates "extra carbon dioxide does act as plant fertilizer, but that the benefits are less than previously believed -- and probably less than needed to avert food shortages."

The World Bank estimates that there may be as many 940 million hungry people this year. The international relief agency Oxfam projects already high food prices more than doubling by 2030 with perhaps half of that spike due to climate change. With those increases could come hoarding, gouging, panic buying and food riots like those that led to the overthrow of the Haitian government in 2008.

Nor is it just our food supply that has climate change breathing hot and heavy down our collective necks. City and state planners also are examining its impact on urban centers and preparing for the worst. A May 22 Times article notes, "Climate scientists have told city planners that based on current trends, Chicago will feel more like Baton Rouge than a Northern metropolis before the end of this century... New York City, which is doing its own adaptation planning, is worried about flooding from the rising ocean."

In Chicago’s case, scientists project that if global carbon emissions continue at their current pace, the Second City would have summers

"like the Deep South, with as many as 72 days over 90 degrees before the end of the century. For most of the 20th century, the city averaged fewer than 15…

"The city could see heat-related deaths reaching 1,200 a year. The increasing occurrences of freezes and thaws (the root of potholes) would cause billions of dollars’ worth of deterioration to building facades, bridges and roads. Termites, never previously able to withstand Chicago’s winters, would start gorging on wooden frames."

Conservatives like Santorum may scoff but the insurance industry is telling cities and states they had better adapt to reality or face ever higher premiums: "The reinsurance giant Swiss Re, for example, has said that if the shore communities of four Gulf Coast states choose not to implement adaptation strategies, they could see annual climate-change related damages jump 65 percent a year to $23 billion by 2030."

Of course, it’s the science that right-wingers dismiss as "junk" that could help save us, not that they want to hear that. Researchers are developing strains of rice and wheat more resistant to heat, drought, flood and rising levels of carbon dioxide.

That takes cash, another notion to which conservatives are especially adverse. Over the last five years, the Bill and Melinda Gates Foundation has spent $1.7 billion to feed the world but private philanthropy isn’t enough.

A year ago, the State Department and the US Agency for International Development began Feed the Future, a global hunger and food security initiative to boost agriculture in 20 desperately poor countries. President Obama has pledged $3.5 billion; so far, Congress has come up with a little more than half of it.

We live on a planet where, New York Times reporter Justin Gillis wrote, "Little new land is available for farming, where water supplies are tightening, where the temperature is rising, where the weather has become erratic and where the food system is already showing serious signs of instability." But last month, the House appropriations subcommittee on agriculture, headed by Georgia Republican Jack "I Came from God, Not from a Monkey" Kingston, cut Feed the Future’s budget by thirty percent. How do you like them apples?