President tries to address concerns about his handling of the economy 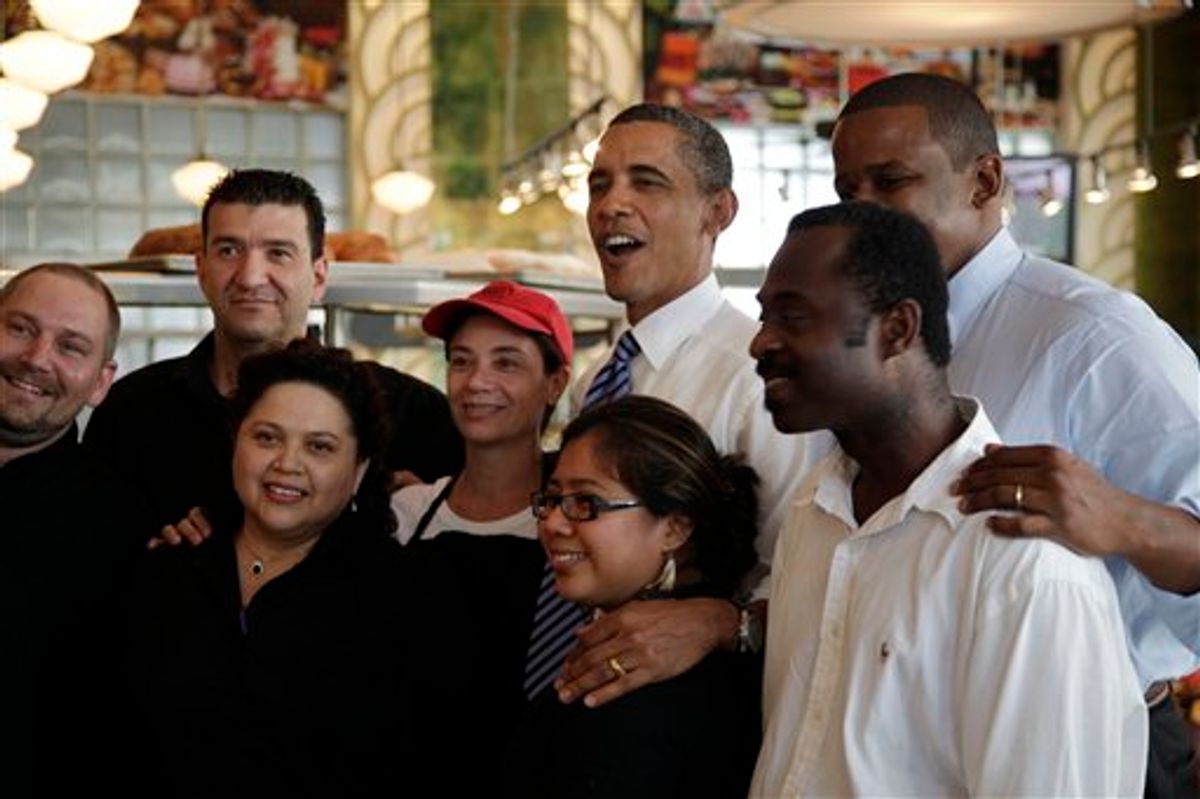 FILE - President Barack Obama, center, and Rep. Kendrick Meek, D-Fla., second from right, pose for photos at Jerry's Famous Deli after a fundraiser for Florida Democrats, in this Aug. 18, 2010 file photo taken in Miami Beach, Fla. President Barack Obama has problems in Florida that he didn't have when he won the pivotal swing state in 2008. The challenges show why Obama has been a frequent visitor to the Sunshine State. (AP Photo/Carolyn Kaster, FILE) (AP)
--

President Barack Obama says people need to be patient about the economic recovery and that training workers for manufacturing jobs will help with the turnaround.

The recession didn't happen overnight and won't end that way, either, the president said Saturday in his weekly radio and online address.

Recent polling found broad disapproval with Obama's handling of the economy as the 2012 presidential election takes shape. It reached 59 percent in a Washington Post-ABC News poll.

Job growth slowed sharply in May and unemployment inched up to 9.1 percent. Economic indicators also showed that manufacturers cut 5,000 jobs last month. Those were the first job losses in that sector in seven months.

No president since World War II has won a second term with a jobless rate above 7.2 percent, and Obama's options for achieving faster economic growth before the November 2012 election appear limited.

Obama scheduled a visit to Durham, N.C., on Monday for a session with his jobs council on how Washington can encourage private-sector hiring. Council members and administration officials also planned to hear from businesses in the region.

Last Wednesday, Obama announced an effort by the private sector, colleges and the National Association of Manufacturers to help half a million community college students become trained and certified for manufacturing jobs. They would get a credential guaranteeing that they are skilled.

Obama said other steps, such as providing students with a quality education and investing in new jobs in the clean energy sector, will aid economic growth.

In the weekly Republican message, also on jobs, Rep. Adam Kinzinger, R-Ill., recalled the administration's promise that unemployment would go no higher than 8 percent after Obama pumped billions of dollars into the economy soon after taking office.

"These are some of the steps we need to take to get government out of the way and let our economy grow and get back to producing jobs," he said.