How common is infidelity, anyway?

The Weiner scandal demands a hard look at the research. It's as (predictably) disturbing as you'd think 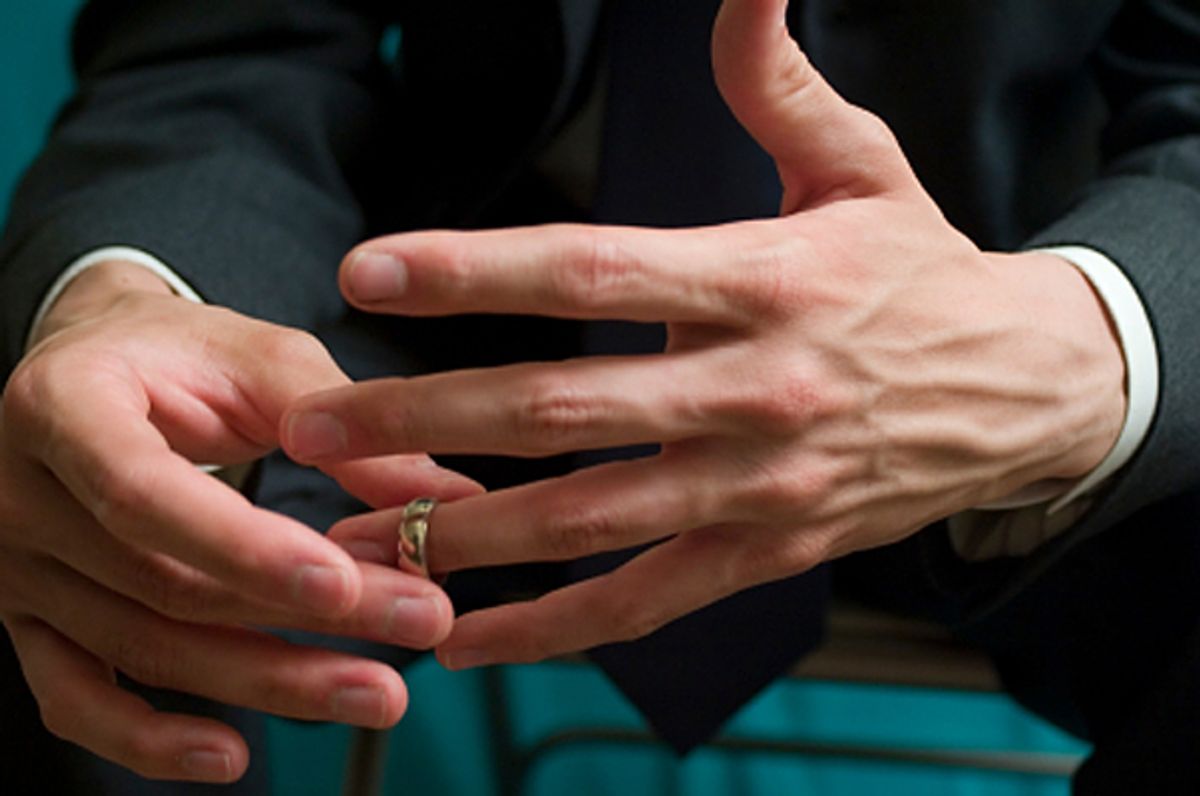 Monogamy has had better weeks. Not that fidelity has had many good weeks in recent years, given the visibility of famous philanderers, but this latest political sex scandal had me seriously reconsidering whether monogamous marriage is realistic. But that was an emotional response, not a rational one -- so I decided to go out in search of actual facts.

"Facts" are easy to come by in this arena, in the sense that there are scores of surveys on the prevalence of extramarital affairs in America. In 1948, Alfred Kinsey famously reported that seven out of 10 men and one in five women admitted to having an extramarital affair. Most contemporary surveys estimate the number of people who cheat during a marriage at anywhere from 20 to 50 percent of women and 30 to 60 percent of men. Note, though, that in 2002 the National Opinion Research Center at the University of Chicago found that 15 percent of married women admitted to an affair, compared to 22 percent of men. The best educated guess, according to researchers at the University of Texas at Austin, is that an affair takes place within 40 to 76 percent of marriages: "A conservative interpretation of these figures suggests that although perhaps half of all married couples remain monogamous, the other half will experience an infidelity over the course of a marriage."

Infidelity rates are notoriously difficult to pin down because who wants to admit to being a cheater? Then there is the fact that people -- and the scientific surveys we're relying on here -- employ very different definitions of infidelity. As the anthropologist Helen Fisher explains, a meta-analysis of a dozen American infidelity studies found that "31% of men and 16% of women had had a sexual affair that entailed no emotional involvement; 13% of men and 21% of women had been romantically but not sexually involved with someone other than their spouse; and 20% of men and women had engaged in an affair that included both a sexual and emotional connection." Things get even more thorny when you consider the variety of ways that people stray these days, which from some perspectives can include sextual encounters à la Rep. Anthony Weiner. It's difficult enough to define these terms within a particular relationship, let alone across a culture.

All those limitations aside, we can make some safe generalizations about what presages cheating -- for starters, marital dissatisfaction, a perceived lack of emotional support, poor communication, and infrequent or unsatisfying sex within the relationship. Other commonly blamed causes are low self-esteem and narcissism. The latter is typically pointed to as the cause behind the obscene number of celebrity sex scandals of late, the thinking being that people who reach such heights of success are generally driven by an addiction to risk-taking and adrenaline, a sense of entitlement, egotism and arrogance. As Tiger Woods famously said after admitting his affair: "I convinced myself that normal rules don't apply. I felt that I was entitled."

All of this leads me to re-conclude that I won't be marrying a politician or a celebrity. That isn't to say that I won't also reconsider my definition of marital faithfulness -- and if I do, something tells me I'll have plenty of company.